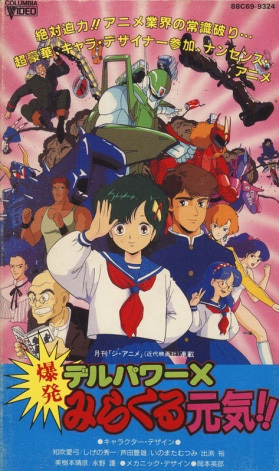 Hanegi Manami is a junior high school girl with unusual relatives, to say the least. Her grandfather's passion is building unusual things, and has just had his latest concoction delivered to their doorstep -- the mecha known as Del Power X! With a driver's seat specially designed for Manami, its powers are rivaled by no other. Unfortunately, her grandfather's rival Von Getsueru and a plethora of other people are determined to prove that fact wrong, regardless of who is in the pilot's seat! Manami must fight for love, pride, and above all else, the loss of her precious bento!

StoryHmm, where to begin with this one. Well, what kind of OVA *is* Del Power X, exactly? It definitely has mecha, it also has some bits of random off the wall comedy (usually related to parodies, or just wacky like Abenobashi or the like). I'd say the first half of the 40 minute OVA is undoubtedly better than the second, as it has most of the funny comedy (though there isn't a huge amount, just so you know), as well as funny things with the mecha. But the second half is mostly just Manami fighting and not knowing what to do, against all sorts of people-in-mecha-suits that I'm still not sure where they came from. It loses its humor and moves more into its unoriginal tone, and is boring. So, the only real saving grace is the comedy, which happens few and far between. The actual story itself is weak, fairly unoriginal, and unexciting to watch. AnimationVery old looking, but not pulled off well, compared to other series from this era. The colors were washed out and non-vibrant (mostly grays, school uniform colors, and then the colors of the mecha), the character designs unexciting and unattractive, and the special effects ordinary. The mecha fighting made up a lot of the action type scenes, and their movements were fluid and interesting, but nothing that stuck out as really neat. Absolutely no CG or other unique things were used. One thing I didn't enjoy was the fanservice. I'm sorry, but why do I need to see blatant panty shots of a junior high student? Gross. SoundI will say that the opening song was absolutely hilarious. It reminded me of the cheesiest of 80s songs that you might hear as the opener to an old low budget movie. The rest of the music, though starting off solid as pure cheese, turned fairly monotonous and repetetive. There were also sound effects used when each character was introduced (fairly often) that got kind of annoying. All around average music, despite the few hilarious gems in the beginning. CharactersThe characters in Del Power X were definitely nothing to be excited about, since A) they weren't developed at all and B) they didn't even have any roles to fit. Manami was a junior high school student, there was a grandfather, some people in mecha, and an older boy. That's about as complex as the roles get. And in 45 minutes, how can these roles really be filled? From the beginning to the end, you have no attachment to anyone, though it isn't like there are a lot of complex emotions and/or drama anyways. Thus, a poor score. Voice actors were fairly decent, but still nothing spectacular. OverallFrom the very beginning, I think it's easy to tell that this one won't be a winner. Although sporatic bouts of comedy help to lighten your spirits, this OVA can't help but be what it is -- average. From the music, to the lackluster characters, to the poor animation style, Del Power X will probably do nothing but disappoint. Watch it if you like mecha in unusual places or circumstances, or want anything that has even the slightest amount of random humor. Else, this probably isn't one to check out.