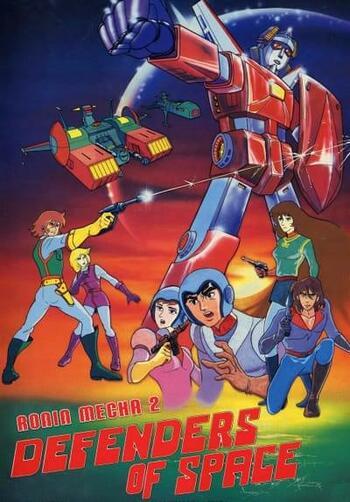 I have no idea what to write here. Do I trash this movie for the utterly boring plot, the obviously-ripped off designs of EVERYTHING, the absolutely atrocious dub (the only way I could find it), and the even worse animation?

Or do I praise it to high heaven as some sort of So-Bad-It's-Good masterpiece?

Basically, if you enjoy camp, or stuff of the So-Bad-It's-Good variety, give this one a try. You will probably love it. If you don't, then stay far, far away from this....thing.

This movie was pretty hard to find but seeing the poster of it, how could I pass it up? The protagonist robot looks like some kind of cross between a Transformer and the OG Gundam (later we find out, he IS a Transformer--Inferno to be specific), and behind him is a ship which looks suspiciously like White Base from the original Gundam series.  The dub I ended up watching had horrible sound quality, and the voice acting was.. well, basically Casey and Friends. The dialogue was utter crap, too.

The animation is extremely cheap and there are many re-used shots even within the relatively short runtime of 66 minutes.

The character designs are ripped off of Gundam and Star Blazers/Space Battelship Yamato, with the humans looking like Gundam UC-timeline Federation troops and one of them even looking like Sayla Mass. The villains look like Gamilons in Zeon uniforms, and the White Base knock-off is theirs.

I really have to wonder if anyone took this production seriously. I know I sure didn't! Have fun.