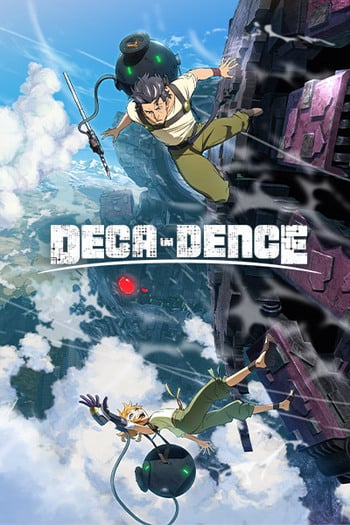 After nearly being driven to extinction by life forms known as Gadoll, humanity dwells in a mobile fortress named Deca-Dence. Built to protect humans from the Gadoll threat, it's occupied by Gears, warriors who fight daily, and Tankers, those without the same skills. Natsume, who dreams of fighting, meets Kaburagi, an armor repairman. Their chance meeting will shake the future of this world.

Deca-dence is a show that on one hand has many good ideas and on the other hand has a very lukewarm presentation. Many dropped it in the first episode because they weren’t interested in a post apocalyptic dieselpunk setting, and many more dropped it in the second episode because they didn’t like the sci-fi twist. It’s hard for the average viewer to get into what it’s about, in the same way shows like Brigadoon, and Shinsekai Yori are hard to get into. It’s also what makes them stand out and in case you manage to get used to their unorthodox presentation, you will get some of the most ambitious series of the years they came out. But that mostly means they are trying to be different far more than they are trying to be entertaining, thus they are not shows for the casuals and they don’t stand a chance next to whatever is made for mass consumption. This means Deca-dence is worth watching mostly for its ideas and ambition, rather than its presentation and execution. As someone who feels nothing when he watches something that was made for mass consumption, such anime are far more captivating than by the numbers fighting shonen ala Black Clover and My Hero Academia. The setting is partly a post apocalyptic wasteland where people have to constantly fend off monster attacks and get their fuel and food from the corpses of said monsters, and partly an advanced sci-fi society where everyone’s consciousness has been placed inside a robot and works for keeping the system free of bugs. There is tension and there are stakes, since people are constantly killed on both sides, and initially the situation appears to be hopeless and quite depressing. Despite all that, the tone is light. The characters are not behaving in a grumpy and shroud manner as a result of a world where most of them are dead and they are being constantly attacked by monsters. The heroine in specific is one step away from a silly comic relief. She makes a joke out of almost everything and tends to ridicule the grim situations. It’s like you are watching Attack on Titan, but the main character is Potato Girl. The male robot mentor is by far the best character, as he serious in his line of work and questions the system he is part of without coming off as a clown. Up to the point he befriends a bug, refuses to obey his superiors, and gets punished for not following the program, he brings a very pragmatic side to a show that is full of silly looking robots inside human avatars that are playing a game. Once he gets to the prison and he has to do some hacking shenanigans, the realism is mostly lost, because of how easily it happens. And basically, once the prison arc begins, the show is also revealing its weaknesses, since it constantly finds excuses to plot armor him in situations anyone else would have died, as well as to give him hax abilities that can overrun the safety measures of the system despite being within the confines of a gulag. In essence, he got more powerful than ever before by being suppressed by the very system that doesn’t want him to do more. That was so immersion-breaking. The concept remains cool and it kinda explores themes regarding reality, existentialism, and free will. But, it’s hard to take it seriously when the heroine is a comic relief, the robots are silly looking, and most of what is going on gets infodumped to the viewer. There are a lot of forced explanations coming from chibi robots that are plugging liquid shit in their ass, which leave you thinking ‘What am I watching?’ So yeah, as intriguing as it was with its cool ideas, it presents them in such a silly way to the point of becoming a detractor for most. It eventually manages to tell a full story, but the tone remains light and despite the global threat both civilizations are facing, the problems are solved way too easily and the finale leaves you with an almost fairy tale ending. I had fun with how it stood out from everything else at the time it came out, but it is definitely not for everyone and the levity surrounding the conflict doesn’t let it be more than just okay as a whole. And by the way, just being okay, is still more than being bad. Deca-dence is still one of the very few shows I liked in 2020, which was supposed to be a new era for anime thanks to Korean webcomic adaptations. I have far more respect for a show that tried to do things differently and which nobody was hyping, than for cashgrabs that Crunchyroll was constantly promoting as a new era for anime, when they were rushjobs based on overrated trash, made solely for selling subscriptions.

Like many other people that watched or tried to watch this show, i was left with the same question and that is... What did i just watch? SPOILER: Negatives: - This show could have been great, but i think the very first and the biggest problem of this anime was the pacing, It felt Suuuper rushed, the pace was extremly fast, even tho they somehow managed to make it work in the end, i still couldn't get over this feeling that the entire story just felt rushed and shallow. - Talking about the story, it is Unique, that is for sure a fact, but just because something is unqiue it doesn't mean it must be a good show as well, similar to other original projects/anime like Darling in the Franxxx, Deca-Dence pretty much failed in almost every part of the story, because as i said the story being rushed caused the characters to feel shalow as well since we didn't really get the time to get to know them, i legit didn't really care at all about every character in the show except of course the main 2 ones (the girl and the cyborg dude), the purple guy with the Kamina glasses was decent as the antagonist tho, i liked him, and of course the other cyborg characters, the main ones like the Big Purple guy and the cyborg hacker girl were fun to watch, other than those, every other character was just awful! not only were they bad, but they were useless as well, (especially the human characters, somehow they made me care more about the cyborgs than the humans). - Other problems with the show:    - It is fine to get out of trouble by getting help from the cyborg hacker girl once, twice,... but holy shit but not every time, Literally every time a problem appeared guess what.. the cyborg hacker girl just solves it in a few sec, eaaaaaaaasy.    - Talking about the story, What the hell happened at the end with the main antagonist? i legit have no clue, the main antagonist "guy" aka the system or whatever the fuck he was, he just vanished? like what just happaned with him? that felt so weird how at the end he just leaves and is never seen again, such a waste of a cool antagonist.    - One of the worst things about this anime that i almost forgot was of course the main plot of the story, as in why was this whole thing made in the first place, i am talking about the whole deca dence robot with the people inside fighting this endless batte against these CGI monsters and getting helped by some cyborgs that thought they were playing a game just for fun, seriously what was the point, the anime never explained this, if the system was the one creating the monsters and making them attack the deca dence robot and the people inside it, then it should have had a good reasond behind it right? Well tough luck kid, there was none, ZERO! The best analogy i can think of right now to this entire anime plot would be something like this: So there is this weird guy outside the window hiting his head with a brick and people would go and ask him, why the fuck are u hitting your head with a brick?  The guy's answer will be: Oh, i am doing this to maintain humanity and to save them, because they are stupid and they almost died on their own in the past.  SO yea hiting yourself with a brick aka creating monsters to attack the only humans you have left and to kill them and make them suffer is the only way to maintain humanity, GG best plot in the whole world, what can i say. And the most ironic part about all this is that this Guy that hits his head with a brick aka this "system" keeps calling humanity foolish and stupid, yea sure, i wonder which one is the idiot between them...  I really wanted to like this show but in the end the whole thing collapsed in it on itself similar to how the Deca dence robot collapsed at the end, such a waste of a cool concept, oh well.

I really wanted to like this story because I'm a big fan of post-apocalyptic settings. But the whole thing fell apart for me pretty quick after a few episodes. For one, it is introduced as a semi-serious setting where most of humanity is now lives in a single mobile fortress that roams the planet defending itself from roving bands of monsters that attack it periodically. People die from these attacks and the main character's dad died trying to save her. So as the viewer, you are now invested in her story trying to survive in this strange new world. The problem is that after the twist, practically all the tension of 'trying to survive' turns into 'let's just beat up the baddies' as the girl suddenly becomes super skilled at killing monsters after a few practice runs and it becomes more of a kids show. Like literally. Without spoiling the twist. The entire artwork of the show at different times will now switch from the semi-serious dark bloody animation one would expect from the earlier episodes to something a six-year old scribbled down for their kindergarten class  It was pretty jarring and killed a lot of the immersion. If you are going in thinking it'll be like the first few episodes of the anime. You are going to be pretty disappointed and it even starts acting like a kid's show with episodes being dedicated to teach the audience some moral lesson about how to play fair and to never give up on your dreams.  It's kinda like...eh....disappointing.  And it doesn't help that it's already episode 9 and I'm barely know anyone other than the protagonist girl and her older middle-aged mentor. Everyone else practically doesn't exists, are given 0-10 seconds of back story, and 0 reasons to care whether they are die or not.  It just leaves you feeling that the whole world is just empty and hollow with each new episode, making the whole thing pretty forgettable.  So I mean, if you are a kid about 10 years old who likes watching fighting shows. This may be the show for you. But for everyone else. Watch the first 3-4 episode and then call it quits.  Cause it doesn't get better. 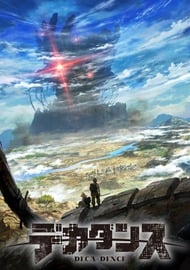