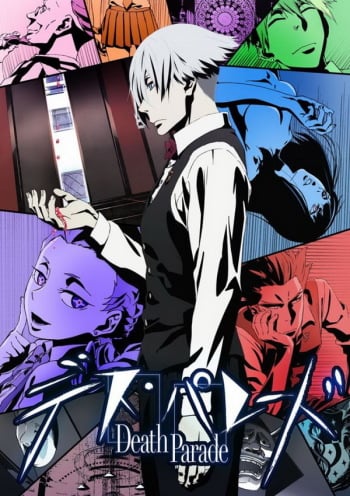 Both stories have a pretty much brutal ''play or die'' setting, even though they are quite different, still have some similarities.

Both About Death and Death Parade address the things that could happen in the afterlife, the regrets people might have about their lives and what happens when you weren't what one would call a "good" person. This premise creates a quite emotional atmosphere in both.

Although the system that is shown is very different, the atmosphere feels the same. This makes me think that if you liked one of the two, you might like the other too.

Princess May and Prince Kite have been engaged since they were children, and May always believed they would live a happy life together. But when an evil sorceress with a mirror demon (J) and a lust for... well, just about everything, sets her sights on May's kingdom and takes control of her father, everything is put in danger.

First, I'll state the obvious. Death Parade and Judge are both about high-stakes games. But it is similar in other ways that aren't quite as obvious. For starters, Death Parade shows peoples' bad sides, whereas Judge does the same. Without spoiling Judge for everyone, let me just say that things get ugly. In Death Parade, things also get ugly. And it's hard to say any more without spoiling everything, so I will end this recommendation here. Make sure to check out Death Parade and Judge! They are both very great and psychologically intense.

In this game, there are 12 players with 3 werewolves - all from the same school again. There’s a diviner again, along with a new position- the bodyguard, who can protect a player per night against the werewolves.

Meet Sakai Hiroaki, a high school teenage mastermind with a genius-level intelligence and a lack of interest in anything that is easy to him. During one unlucky day, in an attempt to stop a student from committing suicide, he ends up committing suicide himself. After he awakens, he finds himself not in the real world, nor in heaven, but in purgatory, along with a group of others who did the same: commit suicide. Sakai discovers that he and his peers are subjected to never-ending intense death games in this world for reasons unknown to him, and he tries to find a way to escape.

In this game, there are 12 players with 3 werewolves - all from the same school again. There’s a diviner again, along with a new position- the bodyguard, who can protect a player per night against the werewolves.