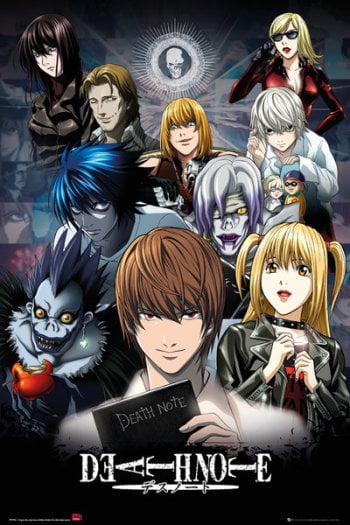 What if you had the power to erase people's memories? Would you use it to help those in need? Or would you use it to become the most powerful person in the world? For Kyle, this newfound power was going to change his life... for better or for worse.

This webtoon basically is the same as death note but this time using a computer that can erase peoples memories.

The resonating Echo of the sword changes the boy's fear into rage.

Similar to death note but the main character uses a sword with incredible power to kill criminals. If you like death note you may like this.

A whole manga based on deception, lies and manipulation. What makes it worse is the whole game is based around this.. if you like death note for its psycological mind twists and edgy vibes, this is the manga for you!

The year is 2014, a new substance, SDE01, commonly referred to as "Mana" is discovered by a group of Russian scientists. The world plunges into a development race to find uses of this new seemingly unlimited source of energy that cannot be seen or felt. 16 years after the discovery, it's now the self-proclaimed Age of Magic, where you can download an App to your very phone and cast magic. However, heavy restrictions have been imposed over the available spells, and the required paperwork to even use a high level spell are astronomic. Among the citizens of this new world, a red robed mysterious man seems capable of wielding extremely powerful magic in a way that should not be possible. It's unknown what his aim is or what he wants to accomplish. All that's known about this mysterious person is that he has been using forbidden level spells to kill evil-doers throughout the city. But detective Kim is in charge of catching this murderer/hero. And he doesn't plan on giving up.

In both of these stories are about these seemingly "perfect crimes" which kill criminals threw supernatural means. They both have a detective that tries to bring them to justice.

Homicide detective Hiroki Dan is the son of a former police superintendent general and seems to be on the fast track to career success. He maintains a hidden identity as a serial killer responsible for more than a hundred murders of people he deems beyond the reach of the law.

The land of the dead is a heavily bureaucratic place full of paperwork, and it is the job of the shinigami (death gods) to ensure that the dead stay dead and in their assigned locations. Tsuzuki Asato is one of the longest serving shinigami, but is somewhat flaky and difficult to work with. He is assigned a new partner, a rookie shinigami named Kurosaki Hisoka, who seems to be the complete opposite of Tsuzuki in personality. As the two begin investigating various cases they become entangled in the plots of the mysterious Dr. Muraki Kazutaka who seems to have something to do with Hisoka's past. Life is never dull in the afterlife as Tsuzuki and Hisoka deal with Muraki's antics, their growing relationship, and Tzusuki's own dark, mysterious past that continues to haunt him.