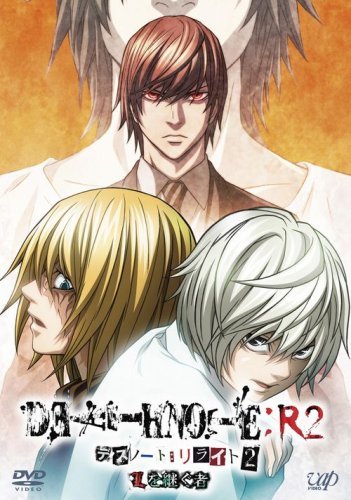 I give the same warning here as I did for my review of the first recap. If you haven't seen Death Note, I wouldn't recommend watching this. If you have seen Death Note and think this "rewrite" will introduce any new material, you'd be mistaken.

Story: Well this recap begins with the Monopoly Guy shooting the viewer with a Gatling gun or something, which I suppose is a logo for the studio. Then we are treated with 10 minutes of L narrating a recap of the first recap. Honestly I don't see why the writers found that necessary. I can't believe anyone would watch this without having seen the series, or at least the first recap, so they could have saved me some time. All in all, this is perhaps not the most promising start.

The first recap ended with episode 25 of the series and this one picks the story up at episode 27 (I guess #26 was deemed expendable). The story score is pretty low here because this part of the story in the series pales in comparison to the first part. I won't go into too much detail, but I will say that a big part of what made the first part special is painfully absent here and the story suffers for that absence.

When you take what was a mediocre story in the first place and then drastically condense it (288 minutes of material down to around 90), you can't really expect too much.

Animation: The animation was always a strength of the series and almost everything was ripped right from the series.

Sound: Great voice acting, as you would expect. The music seemed overly-dramatic at points, but that's probably a side effect of the lack of drama in the chopped up story.

Characters: At their best, Near and Mello were poorly developed and inadequate adversaries for this series. When their back stories and identities were abandoned in the condensing, they became completely unidentifiable plot progression mechanisms. As I said in my review of the first recap, it's difficult to criticize lack of depth when most of the material is forcibly cut, but it was almost painful watching Near and Mello in this recap. I hated them in the series, and I loathe them here.

Apart from those two, the other two characters introduced in the last 12 episodes of the series (who were actually well constructed) are difficult to like in the recap because of the bites that were taken in their airtime to save space.

Overall: It's not so much that this recap is poorly made, it's the fact that it's a recap of what I view as a weak story with terrible characters that only looks worse when compared to the preceding story and characters that drives down the score.

This is just basically used to narrow down the story. They reviewed the first half when L was still alive, using L as a narrator. After all that they went straight to the second half where L's successors came into taking over and etc. Well it would be just like rewatching Death Note if u havent watched it already, not really recommended.

Death Note Relight 2 is a recap of the orginal series episodes but with extended/remade scenes which should have been in the original but taken out or made later on.

The ending in relight 2 (Spolier) was not as good as the first one in the original series, which makes me think that if they ever decided to make any more death note.. that it wont be as good as before.

The way the relight has a more darker feel to it, may put some people like me off.. as i have watched the orignal series 10 times now and i mean 10 times and i do not like the ending of relight 2 at all for my own personal opinion.

The new scenes are amazing and you get to see L again in the begining who is commenting this relight but in the first relight it was from ryuk.

This relight isnt good if you liked the original. the relight was made for the fans of the show in my opinion that gave reviews on stuff that could have been better or may have been a better story line.

i rated the relight at least 9.6 it would have been 10 but the ending the remade a little bit wasnt emotinal like the last one.