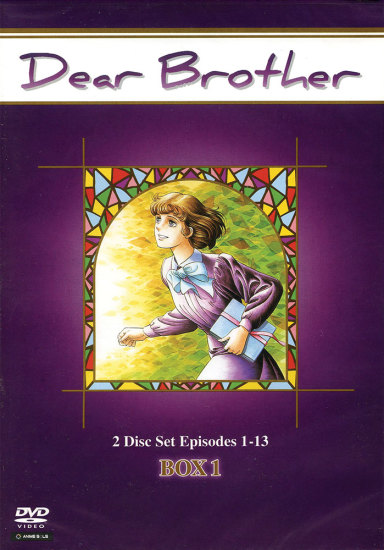 As a child, I used to dream about going to an all-girls boarding school, living away from my parents, and having bold, giggly adventures behind my teachers’ backs like in those Enid Blyton novels. Once I hit my teens, I could think of nothing worse – I learned to prefer the company of men, and my idea of social hell is getting stranded on a desert island with a bunch of young women. To understand my reasons why, watch Brother, Dear Brother.

It begins an angst-ridden teen soap opera in which the rich bitches of a prestigious high school vie for position, power, and other such petty rewards. Their concerns are typically superficial and have no grounding in everyday reality. I recall a particularly illustrative scene after Nanako wins a place on the Sorority, the school’s most elite club. One astute peer observes, ‘I don’t see anything special about her. Not exceptionally pretty. So she must be the only daughter of a very rich family.’ Her friend knowingly responds, ‘No, she’s lower middle-class.’ The former, now truly aghast: ‘You’re kidding. That makes no sense to me!’ I’m not sure which saddens me more – the girls’ life-long imprisonment in a rose-tinted bubble or the fact they’re correct to question Nanako’s abrupt selection based on such inane criteria.

Over time, however, the series evolves into something far more interesting, if no less disturbing - an edgy psychological melee in which everyone hurtles towards madness in that Lord of the Flies sort of way. This is shoujo, alright, but shoujo with a surreal flavour – like biting into an apple and tasting hints of orange, banana, and magic mushroom.

Key to its free-for-all feeling is a narrative that’s as expansive and convoluted as it is thought-provoking: the protagonist Nanako Misono falls in love with the fey (and slightly demented) Saint-Juste, who in turn has a destructive relationship with the most popular girl, Miya-sama; aloof and cunning, she presides like an ice queen over the Sorority, which insecure Mariko Shinobu and bitter Aya Misaki are desperate to join; and both of them try to rise to the top of the playground food chain by targeting Miya-sama’s new favourite, Nanako Misono. Breathless yet? Just think, that’s only the beginning. Later, more relations, twists, and intervening characters add to the complications.

Of the various intertwining plot strands, viewers will likely find Miya-sama’s and Saint-Juste’s obsessive relationship the most emotional. Miya-sama maintains a strange hold over Saint-Juste and manipulates her with the megalomaniacal glee of a puppet master. In turn, fragile Saint-Juste rails and flounders, clearly in distress but just as clearly tied to Miya-sama by some sentimental bond. Although gripping for the most part, their tale does take on a predictability that’s difficult to stomach. Saint-Juste turns out the kind of victim who, despite half-hearted suicide attempts and endless crying, runs willingly back into the hands of her oppressor. Instead of a sympathetic tragedy, this tango of punishment describes the pathetic descent of a loon; I thought the sooner she jumped off a bridge, the sooner she could release me from her cycle of self-abuse.

Granted, Brother, Dear Brother is not without visual flaws. It overuses its still shots to the point when entirely mundane situations such as Mariko and Nanako getting off a bus have to be immortalised as a sketch. One side effect is that the series has aged poorly and nobody could mistake it for anything but a nineties production. More often than not, though, the stills are delightful; like paintings or manga artwork, their stylistic touches create a dreamy wistfulness that makes the show distinctive.

Most importantly, when the animation flows, it does so with incredible beauty. The slender, doe-eyed cast glide through frames rich in detail and potently atmospheric. A portentous wind may then blow in a timely manner, lifting lush volumes of hair and diaphanous skirts, while the sun makes eyes sparkle beatifically. What’s more, at the mere sweep of a paintbrush, the characters’ ephemeral sensuality can slip into frightful ugliness.

Indeed, what Brother, Dear Brother lacks in technical polish, it makes up for with evocative style.

Heard once, the background melodies are perfect accompaniments tinged with melancholy, particularly the eerie ditty that sounds like a circus theme. Unfortunately, like a broken music box, Brother Dear Brother’s soundtrack goes round and round, repeating the same handful of tunes until any listener will feel nauseous. After hearing same tunes every third or fourth scene during one episode, I was occasionally tempted to watch with the mute setting on.

In contrast to their graceful character designs, the girls of Seiran High have damaged and ugly psyches. Vicious, two-faced, insecure, and disturbed, their’ neuroses peel away over time to reveal tragic back-stories. Take Mariko, one of the more outstanding characters, whose China doll looks and manic possessiveness combine to make for a creepy personality. Behind her unstable temperament, however, lies a sense of isolation caused by her volatile family situation.

Be it their social class, perhaps years of privileged inbreeding, or just pubescent hormones, these are women at their most contemptible but also at their most captivating. Nonetheless, for the same reasons that make them singularly entrancing I could never relax with them; as much as I understood their deplorable actions, I could never like them.

Melodrama woven through art woven through coming-of-age woven through high school romance. The show takes full advantage of its explicit femininity, building a plot that’s intelligent but also offbeat and bewildering. There’s a lot of trauma, a lot of twisted shit, and a lot of emotional behaviour. Dare I say, it’s a girl’s worst nightmare.

As much as I try to avoid generalizations, I have to admit that my childhood gave me a chance to spot several differences in the way boys and girls mistreat each other. While boys tend to go for physical assaults, girls seem to place most of their faith in psychological warfare of a quite unnerving kind; rumors, verbal abuse and trash talking to be a bit more precise. With this in mind, watching Oniisama e might sound like a pointless exercise of masochism since large portions of its storyline are comprised of this kind of behavior, but rest assured, there are lots of qualities to it as well. On with the review!

When young and innocent Nanako is chosen to join an elitist sorority where only those of beauty or wealth are permitted, it causes social chaos in a school where your appearance is a virtue far greater than anything else. As this unleashes a turmoil of repulsive bullying that escalates in intensity you might want to check again to make sure that this is actually shoujo; which I assure you, it is. However, not of the usual kind where beautiful boys fall for bland girls, but rather some mysteriously altered version that includes themes like homosexuality, incest, drug abuse and lots of other far more serious topics that might even make this show a chore to watch.

Why would anyone watch this then? I'd point at the characters as the main source of appeal but that isn't to say that the storyline itself is devoid of qualities. As far as overplayed melodrama goes, Oniisama e is as good as it gets and unless you detest the concept of exaggerating certain aspects of school life or emotions you'll find yourself intrigued. Despite being occasionally predictable and repetitive, this is a show with enough twists and shocking revelations to keep you entertained.

As animation it leaves a lot to be desired but as art it's incredibly satisfying with an abnormal amount of still frames that together create a panorama of hideous emotions. Character designs are excellent and although the show features plenty of unimpressive visual techniques, the artwork as a whole is pleasant enough to draw you in which is a virtue few shows of the same age can savor.

Equipped with a terrific soundtrack and voice acting that ranges from decent to spectacular, you'd think Oniisama E deserved a higher score for its sound section. However, after only a few episodes or so you'll discover that almost the entire soundtrack is based around certain over-used melodies that come and go frequently enough to become obnoxious. The opening theme is a mysteriously mesmerizing song that sets the mood perfectly, but not even the numerous qualities here can save the fact that nobody wants to listen to a repetitive soundtrack.

This anime should be called 'Psycho Bitches' to avoid false advertising. I firmly believe that the numerous psychological flaws the characters in this anime have inspired Revolutionary Girl Utena more than the ones in Evangelion ever did.

However, whilst Utena managed to perfect the art of subtle characterization, Oniisama e is somewhat obvious in what it wants to portray. We know that Mariko hates men because we're told so over and over and we know why Miya-sama acts the way she does because we heard Nanako explain her emotions over and over again. While this turns into a thorn as far as writing goes, the characters are still overwhelmingly interesting and everything from their true intentions to their pasts are things you'll want to explore. At certain points in the storyline, watching the show turns into an addiction due to your almost frightening desires to learn more. Some of the relationships we get to see are painfully predictable; some characters are both pretentious and exaggerating in general but watching innocent Nanako discover severely disturbing things about the people she encounter never ceases to be interesting.

Don't worry; I'm not stealing the overall score from the only other review on this site. In fact, I can't think of any rating more appropriate than this one. The melodrama found in this show plays out like a double-edged sword with both pros and cons; the characterization may be somewhat obvious in nature but still fascinating and the entire tale of disturbing proportions is told through manga-esque artwork that's absolutely gorgeous. Do yourself a favor and watch this!

When finding out about this anime recently, we knew immediatly that we wanted to watch it. Adapted from the Manga created in the 70s and produced in the early 90s, it effectively shows a time when computers and information were not everywhere, yet the speed that gossip and rumors spread has almost stayed the same. The soundtrack was composed by the same person responsible for the score in Super Dimension Fortress Macross. The visuals and animation are fantastic. There are a lot of still shots played up by panning and zooming.

As far as the story goes, it covers a lot. Every question I had at the end of the series was answered without feeling like it was rushed. Every episode before it was over left me wanting to know more. I can see where Kuniko Ikuhara pulled his inspiration for Utena.