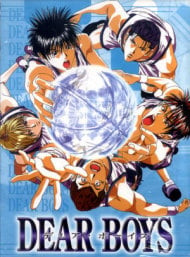 Aikawa Kazuhiko, the captain of a prestigious high school basketball team that had gained national attention, transfers to a new town and school for unknown reasons. A lover of basketball, Aikawa finds out that the Mizuho basketball team is far from even being called a team, and sets out to save this sinking ship. Join Aikawa as he journeys through competitions with the boys and girls basketball teams, throwing down baskets to all challengers, as they struggle towards the national tournament.

Truthfully, I probably would have left this on my queue list forever if I hadn't been forced to by a warning it was going to be taken down. It's not that I wasn't interested but sports manga/anime have never worked for me. I'm going to have to rethink that now though; this exceeded all my expectations! Dear Boys chronicles a portion of a school year at Mizuho High School. Because of an incident between the former basketball coach and then first year Fujiwara, they were banned from playing official games, thus losing the chance to participate in the Inter-High tournament. The coach left and the basketball club imploded. All that are left are four students who are now second years: Fujiwara, Miaru, Ishii, and Dobashi. They don't practice, have no coach, and don't even have a full team. This changes when Aikawa transfers to their school. A star player from the top school, he's escaped from there and his oppressive family who runs the basketball program. He's searching for a place where playing the game he loves can be fun, not only focused on the need to win. His arrival is the catalyst the boys and the school needs. While met with hostility and problems at first, Aikawa awakens something inside the four boys that they thought lost. With only the bare minimum of players, the team is formed and begins to prove themselves to the school, other teams, and each other. We also see the girls’ basketball team a lot and how things change even for them. I can’t explain how much I enjoyed this show and what a surprise that was. I’ll be blunt, I find basketball extremely boring. But there’s none of that here. Like any battle anime (be it about fighting, food, or sports), the actual games are hyped up quite a bit and easily have the best scenes in the show. However, it was what took place off court (or at least not while a game was going on) that sold this anime for me. Everything from Aikawa holding down a part-time job while having practice, Fujiwara dealing with his sempai from the team making his life miserable, and the girls’ team working so hard to learn new shots while helping the boys’ team practice mattered because you really came to know and understand these characters. I may have cheered loudly during the games, but I looked forward to before and after them more. That’s not to say this show is without its flaws. It hasn’t aged well in many respects. The animation is…okay for the time but it’s not great. And I have to admit, I was never a fan of that particular anime style to begin with and it definitely doesn’t show well against more modern anime. This was also the early days of using CGI in anime and it’s not great. My husband and I kept joking that the basketballs were on another plane of existence as they were clearly added in digitally later and rather poorly so. And the music. Now, I have a soft spot in my heart for the opening. It’s odd and definitely dated but I came to really enjoy it. The animation was mostly a large amount of basketballs (and yes, they were still on another plane) dropped from above onto the court and then held suspended as the camera swung around them. Interesting but rather boring after a while. The ending however…the ending was quite possibly the worst ending of any anime I’ve ever watched. And I have some that I really don’t like. The song was not great but it was the video that made it truly unwatchable. I’ve never skipped the ending of a show faster; I got to the point where I could time it almost to the second. If this is how sports anime are, I’ve clearly been missing out. I’ve already got a list I want to try but I will admit, I love to read this in manga form. From what I’ve read, the story goes much further than the anime goes. But while there were parts of Dear Boys I had to get used to or overlook, at its core is a well written and well voiced story. I’m glad I took the chance and even more pleased I didn’t miss the chance to see this. 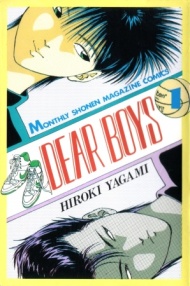 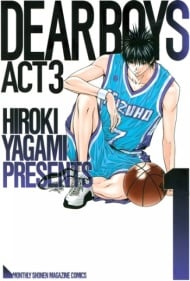 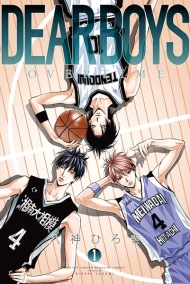