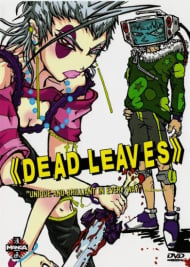 For Pandy and Retro, waking up naked with amnesia wasn't the high point of their day. While going on a crime spree, the duo are captured and sent to the infamous Dead Leaves, a notorious prison where the baddest of the bad are sent. Using the bathroom is a chore, eating is force fed and escape seems impossible -- but is it? Join Pandy, Retro, the drill endowed Chinko Drill and a gang of inmates as they plot their escape from the hell that is Dead Leaves!

StoryDead Leaves is weird. Now that that's been said, let's discuss why. First of all, the plot of Dead Leaves doesn't really matter. This movie was obviously made for the animation, plain and simple. That being said, even if you wanted to understand the plot, it's not so easy, given the extremely unique animation style and the high octane feel and pacing of the anime. In general, Pandy and Retro are two "people" of sorts that awaken on Earth, naked. They don't know who they are or why they are there, and shortly after they run off on a crime spree. They are captured, and sent to Dead Leaves, a maximum security prison. Prior to arriving at the prison, the movie seems strange due to the animation and extremely spastic pacing, but then degrades into something much more sophomoric and childish (and flat out bizarre). If there is one thing that's abundant in Dead Leaves, it's toilet humor. This ranges from things like one of the characters who is literally shaped like a penis (complete with white splooges that come from the top of his "head" (double meaning there) occasionally, which I found to be disgusting), to things like the daily ritual of the prisoners being strapped into straight jackets, hung, and then their ... excrement is literally forced/sucked out of their body. These things reminded me of something I'd see in Ren and Stimpy cartoons, but much, much worse. Quite frankly, it pushed the boundaries of what I'd enjoy, since almost the entire movie is filled with stuff like that. Then again, it's definitely unique for an anime, and I do have to give it credit for that. Regardless, as the story goes on, the plot becomes more and more confusing and on the back burner compared to the rest of what's going on. It has a decent ending for the content, but didn't leave me feeling like I had just watched something amazing. Rather, I felt like I had watched something crazy, interesting, and unique, but not heavy or exciting on the plot. AnimationI'll say this up front: I really didn't care for the animation. Imagine the most abstract scenes in FLCL, double how odd they are, and then imagine it's like that the entire movie. This unique style of animation was made up of giant slabs of colors that were all stuck together to make very colorful and unusual characters and scenes. Everything looked *very* 2-dimensional, almost like stained glass in a way. Even though it wasn't my thing, again, I can still admit that it was well done and interesting, just not fitting my personal tastes. I found the animation to be so distracting that at times I couldn't even see well what was going on, who was being attacked, or anything. I felt the character designs were grotesque and very unattractive, but they did fit well with the rest of the animation and the tone of the movie. There was one scene in particular where guards open fire on tons of inmates, causing a bloody mess to occur. The blood, like everything else, seemed very flat and cartoonish. Colors ranged all over the spectrum, but usually were very clashing and plentiful. You'd usually not see a scene where one color dominated. Rather, you'd see 25 colors in little bits everywhere, which is part of the reason why I was so distracted all the time. SoundThe music fit the spasticness quite well with guitar riffs all the time. The rest of the music was forgettable, but not bad. In general, the pacing of the movie fit with the story, and the music fit with the pacing, making everything come together in a nice random package. CharactersI'm trying to be very non-biased about this review (given the fact that I really didn't enjoy Dead Leaves, but understand it was a "good" movie), but I have to let some bias creep in for the characters section. The characters were grotesque, in my opinion, and creeped me out. Not only did they look hideous, but some were so far down in the gutter that it made me wonder why this didn't have a stronger rating attached to it. The man that is a penis was the most outrageous. Not only did they make a guy that is a penis, but they made him squirt when he was walking. I might find toilet humor funny, but this crossed the line into tacky and disgusting, as far as I'm concerned, and better belongs in a hentai. Other characters included a guy that has a drill for a penis (what's the fascination with the penis, creators of Dead Leaves?), giant monsters and other such things. None of the characters were developed and I didn't even get a good feel for their stereotypes given how distracting the animation was. Unlike things like Cat Soup where each character has their own endearing quirks, the characters in Dead Leaves ended up being offensive and uninteresting in my opinion. OverallI didn't enjoy Dead Leaves. If I could rate this on enjoyment, I'd probably give it a max of a 5. That being said, like FLCL, I can still appreciate how unique and strange this was, and how appealing it would be to a certain type of fan. The toilet humor is far too extreme and unprecedented, though some people might enjoy that. The animation, I felt, tried a little too hard to be crazy, but again, some might enjoy this, and it definitely was unique, I'll give it that. The plot was pretty weak, but again, I doubt that's the reason why this was made. All in all, Dead Leaves is a very strange and interesting watch that some of you might enjoy. Then again, you might not. One thing's for sure... if you are looking for something out there that's crazy, spastic, and random, you'll have to look no further.

Overall There is so much unified hate towards this short little OVA that it’s difficult to really give a standard critique of the show that rates each category in the abstract. Instead, it’s obligatory to start with why I think most people will hate this. In short, this is an anime that flips the audience the middle finger. The creators make a conscious decision that story, characters, or any real meaning whatsoever are completely unimportant. What's more, the humor is beyond tasteless, the character designs are far from appealing, and the show feels almost like a visual assault in the way it barrages the audience with flashy colors, sharp edges and constant motion. This mix, I think, alienates just about anyone who would ever watch the thing. Pure action lovers will have never heard of such an obscure title, people who watch anime for things like “story” or “character development” are going to be sorely disappointed by an almost total lack of either, and even fans of abstract, demented stuff are going to be disgusted when they find that the show has no meat in it to analyze. In addition, this is a show that is impossible to take the higher ground with. Unlike similar (but completely different!) works like FLCL, Paranoia Agent, or Texhnolyze, no one can get away with saying pompous shit like, “oh you didn’t like it because you didn’t understand the deep and philosophical meaning behind it.” The problem is that Dead Leaves has no message whatsover, let alone a hidden one; everything that the OVA brings to the table is as brutally obvious as that one guy’s giant, metallic penis (don't ask). So why, in spite of all of this, did I enjoy the OVA? I think the answer is that I appreciate the raw, prodigious talent that went into making this. The creators are so skillful at what they set out to do, so completely in tune with their own personal vision, that I enjoyed the work despite its numerous flaws. In the end, the creators’ total commitment to making something completely unique wins out. Even if the core concept is patently retarded, the fact that an idea that has never been done before is executed so flawlessly makes the anime worth the small amount of time that it asks.Animation I think people place far too much value in the traditional anime look – the disproportionate girls with giant, insectoid eyes, the generic male protagonist with spiky hair, etc. I’ve found the look to be somewhat tiresome and uninspired after the 2 hundredth or so iteration. Dead Leaves, on the other hand, has a strikingly different visual style, a far departure from anything I’ve seen. A lot of people have called this style ugly, but I loved it. It’s edgy, bold, and very memorable. That, and the actual animation is absolutely top notch – this has the most fluid, inventive, and frenetic work I’ve seen since… ever? Sound Thumping techno + weird voice acting. Generally solid. Story Huh? Character Buh? Value I think many people who have enjoyed this might be staying silent in the face of so much negative buzz. After all, saying, “Yeah the story and characters suck, but the action was good and I liked it!” is very difficult to do without sounding like a complete dipshit. Nonetheless, for those that enjoy the wacky wtf stuff, this should be a more than entertaining diversion.

What is Dead Leaves? It's probably what happens when animators are completely burned out and start doodling. And those doodles get an anime.  Story: The main characters wake up with no memories... Or clothes... And decide to rob the local town for clothing, weapons, and a car. While being chased by the cops, they realize they have pretty bad-ass fighting skills. They still end up in a prison on the shattered moon, though. And that's where the story gets.... Weird. Normally, anime asks for some suspension of disbelief. Dead Leaves goes waaaay beyond that. There is stuff that happens in that prison that can only be described as an acid trip. Animation: Think comic book style art. Thick lines, a lot of color against bland background. It really lends to the strangeness of the anime. Just don't expect consistent frame work. There are scenes and transitions that are a bit... Choppy. Also, why does the TV have such great abs? Sound: I wasn't paying much attention to the sound, which is a good thing. It means the background music wasn't intrusive to the story. The voice acting worked for the characters. Characters: This is where the anime excels. The characters are make this anime with their insane personalities. Even some of the bit characters are given decent personalities. Is this worth watching? Yes. But your brain might be hurting afterward. review for June 2016's DAMC