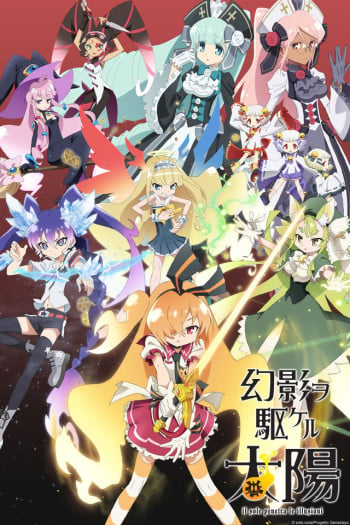 If you're looking for manga similar to Day Break Illusion: il sole penetra le illusioni, you might like these titles.

Asagiri Aya is a young girl who has fallen victim to bullies at her school. Looking for a way to escape her troubles, she looks to the internet for distraction, when a mysterious website called “Magical Girl Site” appears. Simply viewing the page is all it takes to hurtle Aya headlong into the deadly world of the Magical Girl Apocalypse. There, it’s fight or die, against a seemingly endless array of savagely adorable, frilly-skirted killing machines, each armed with magical powers and an unquenchable thirst for blood and chaos.

So both of these are dark fantasy programs, mainly about a group of girls who end up becoming magicial girls.The main being a slightly weaker girl who gets brought into the world of dark magical girls who fight against one thing. So I say if you enjoyed one why don't you check out the other, just because you probably will like them.

One night, Madoka has a terrible nightmare – against the backdrop of a desolate landscape, she watches a magical girl battle a terrifying creature. The next day, the teen's dream becomes reality when the girl – Homura – arrives at Mitakihara High School as a transfer student, mysteriously warning Madoka to stay just the way she is. But when she and her best friend Miki are pulled into a twisted illusion world and meet a magical creature named Kyubey, the pair discovers that magical girls are real, and what's more, they can choose to become one. All they must do is sign a contract with Kyubey and agree to fight witches that spread despair to the human world, and in return they will be granted a single wish. However, as Homura's omen suggests, there's far more to becoming a magical girl than Madoka and Miki realize...

When Kazumi emerges from a trunk, she's naked and in front of a mysterious man. What's worse, she's lost her memories and has no idea how she got there! After eating a meal with the man - a would-be bomber -  the young lady finds herself in the midst of danger and is saved by two girls named Umika and Kaoru who tell her a secret: they're both magical girls, and she is too! Now, Kazumi must re-learn about the world of magical girls, try to recover her lost memories, and meet other companions along the way.