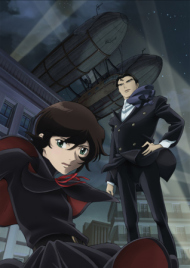 StoryWith significant elements borrowed from classics such as Anne of Green Gables and A Little Princess Sara, albeit with a kick-arse twenty-first century edge, Nijuu Mensou no Musume promises wholesome, rip-roaring adventure for all ages. Initially, at least, there’s the oppressed orphan unhappy with her current existence, the cruel aunt who will stop at nothing to get her inheritance, and the dashing hero who swoops into their lives with danger and adventure nipping at his heels. For the most part, Nijuu Mensou is a fun, but not necessarily believable, caper through an interesting steam-punk universe and the mystery of Twenty Faces is spun out in a very satisfying manner. Above all, Nijuu Mensou is punctuated by odd moments of sheer excitement which provide the necessary propulsion when the otherwise far-fetched narrative starts flagging. I must say, one of the strongest attractions of the series is its uniquely classic tone compared to many of its contemporaries. Nijuu Mensou’s nostalgic portrayal of heavily Europeanised post-war Japan includes zeppelins, men in dapper suits, and villains who masquerade amongst the heroes using nothing more than (ta-daaa!) prosthetic faces. Add to that some dalliances in mysticism and intense action and Nijuu Mensou offers the majority of anime fans a familiar but diverse bag of goodies. Perhaps this rich potential explains the overconfident and inevitably unsound change in focus later on. Clearly, given the various plot elements present in the beginning, the series could take any number of directions. Getting towards the final act, however, Nijuu Mensou decides to abandon the episodic ‘thieves of honour against the world’ format in favour of a moralistic pseudo-science tale somewhat reminiscent of Fullmetal Alchemist. The problem with this change in tack is twofold: firstly, it renders the former half of captivating adventuring and character development as irrelevant to later events. Secondly, with the usual combination of reprehensible human experiments, mad scientists, and tragic ex-physicists laden with sin, there’s actually very little in the latter half that hasn’t been done to death elsewhere. Probably the biggest put-off is the poorly detailed ‘science’ at the heart of the mystery; it doesn’t make much sense, although most will grasp the general concept and find it perilous enough to be engaging. Needless to say, I went along with it due to other strengths (i.e. the characterisation and the world concept) and not because I was gripped by the science-lite moral dilemma.AnimationAs fascinating as the world concept is (the character designs, world building, and colour tones add up to a fairly attractive old school feel), the animation quality in itself is jarringly inconsistent. In the same scene, Chizuko will first engage in fluid, fast-paced combat with her enemies before proceeding to jog across the screen in a static stumble that’s badly in need of extra frames.SoundSadly, Nijuu Mensou doesn’t offer much by way of soundtrack either – the score barely enhances the various moods of the series. The only point of interest may be the opening and ending themes, which are fairly fun, up-beat pop numbers.CharactersChizuko (also referred to as Chiko) is undoubtedly one of the best young female characters to grace the world of television since Sakura Kinomoto (Card Captor Sakura). Although she’s not infectiously cheerful like Sakura and plays less on her cuteness, her distinctive combination of calm intelligence, youthful sense of justice, and sharp combat skills make her thoroughly mesmerising. In a fight, she’s always the most useful individual, often coming up with plans on the spot and outwitting her adversaries through creativity. Despite being a very unique sort of protagonist, she remains at all times believable as a pubescent female; for example, her growing affection for Twenty Faces is at once predictable and touchingly natural. Chizuko is the rare kind of character that effortlessly evades every cliché without being outlandish, and that alone should be a strong attraction for viewers bored of the current standard. Twenty Faces, on the other hand, is defined more by his absence than any actions he takes on screen and swings in and out of events seemingly on a whim. Of course, he remains engaging for most of the series precisely because of this elusiveness and generally plays his part as the dashing hero well when he is on screen. However, his mysteriousness makes relating to him and sympathising with him very difficult. For example, he often ends up leaving thirteen-year old Chizuko by herself to deal with the kinds of enemies (psychotic ex-girlfriends, zombies etc) that would overwhelm even his more experienced followers. Finally, the impact of his role is further diminished by the wider anime context; in a decade defined by deductive geniuses such as Yagami Light (Death Note) and Lelouch Lamperouge (Code Geass), Twenty Faces’ gimmicky approach to theft just comes across as corny and primitive. Much of the supporting cast exists to serve the main plot as opposed to having any interesting stories of their own to tell. Generally, the majority are entertaining and a handful of them even attain some interesting depth, but none of them are half as complex as Chizuko. In particular, I find Chizuko’s maid, Tome, and her best friend, Koito, to be endearing but superfluous additions. Some of the more interesting characters, in fact, turn out to be the antagonists, such as the creepy White Haired Demon whose body can withstand any damage.OverallFor fans of the masterpiece theatre classics looking for an edgier twist on their favourite old school themes, or those simply searching for a refreshing female protagonist, Nijuu Mensou no Musume will not disappoint. It’s highly entertaining for the most part despite being distractingly fantastical in places, and offers several moments of brilliance.

Daughter of Twenty Faces... what a peculiar combination of highs and lows. The first arc of "gentle men thieves" was so crazy interesting, why would you end on the low "mad scientist scheme" note? Why would you make a character as brilliant and dynamic as Chico, and then make every other character innoteworthy or experience little to no growth. Whatever their reason, Chico as a character has completely made this series great in my eyes. ATTENTION!: This review will be presented with the phrase "Arc 1 and Arc 2", this is to distinguish the wonderful first half of the series, from the second mediocre half. Story: 8 out of 10 If I wanted to be fair, I would give Arc 1 a 9, and Arc 2 a 5. Daughter of Twenty Faces starts of really interesting, and truly pulls you in and makes you legitimately want to see Chiko find happiness with her new "family". The first arc is a globe spanning tale of adventure, culture, suspense, comedy, and action. You feel proud when Muta opens up and teaches Chiko to fight, Ken to throw knives, Goro to climb walls, so on and so forth. Then calamity sets in, and I don't mean the calamity that appears in the actual storyline, but rather the disengage from this fantastic band of thieves story into a sci-fi series of haunted memories, weapons of mass destruction, and mysterious shadows lurking around every corner. The second arc consists largely of different people from Twenty Faces' past showing up, and trying to kill Chiko to receive secrets of Twenty Faces from back when he was a young brilliant scientist known as a genius. This is overplayed, and while not necessarily bad, a mediocre shift from the wonderful feeling that grow within you from the first arc. Animation: 8 out of 10 Animation isn't too poor of a department for DoTF, but the character designs are rather boring. Movement is fluid, with very little budget shots, and the world itself is very well done. Post-WWII Japan, done in a pseudo-steampunk type alternate reality. The real charm is seeing the design of old cars, buildings, and especially fashion. Spot on art director. Sound: 6 out of 10 Sound plays out mediocre in the grand scheme of things. Very little background music during the series, and plain OP and ED songs.  Characters: 9 out of 10 This is by far the hardest category to score. On one hand, Chiko is easily a 10 to me. She is the perfect character for her role. Strong, smart, quick, brave, yet very human. Being quick in the mind and on the feet, she always finds a way to get one step ahead, and for this, we love her. The fact that she's such a frail little girl only makes us stand behind her even more as she finds way to work around her body frame. The part that brings it down a bit is that almost every other character shows little growth, or is flat out single minded. This is upsetting for me, being that I wanted to get to know the back story of every one of Twenty Faces gang, and was given absolutely nothing besides a 2 minute hint of Ken's childhood. Twenty Faces himself only opens up by discoveries of Chiko throughout the series, and shows very little of himself besides saving the day. This isn't too bad however, because it reinforces the verdict of Chiko that he cannot change because the war isn't over in his head. No matter how good he's trying to be, he cannot sleep at night without being haunted by the ghosts of his past unless he ends things once and for all. This makes you almost pity him, and his lack of growth seems more of a personal problem then a lazy writer. Overall: 8 out of 10 Overall, the series started very strong, and ended on a more mediocre note, but cherry wise, I could only be thinking it mediocre because of how fantastic the beginning was. Regardless, it was still an excellent series, and I couldn't get enough of it, and walked away from it with a smile on my face. 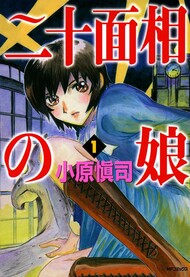