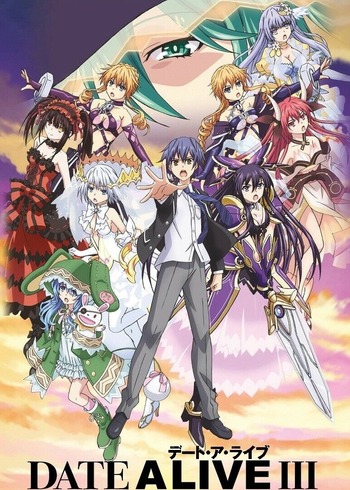 Story:  Typical harem anime similar to "The World God Only Knows"...  The girls fall in love with the mc quickly, which is unrealistic.  That final episode was really lame.  Does he think he's a certain buddhist monk with hentai-spirit powers?  Well, that was a major fail, and his character-type in that episode was utter crap.  MC needs an arc about his two strongest spirits training the others to get that power (of inversion) in order to prepare themselves against DEM.  Plus, Demon's spirit powers are just recycled versions of the other's spirit powers, BLAH.  Witch's story arc was why I gave this as high a score as I did. 6/10

Animation:  Demon's spirit form was her in a wedding dress and a ridiculous wedding veil.  The rest of the animation was decent, though. No other complaints there.  It's an over-all beautifully-colored anime with a lot of complementing colors that don't clash. 8/10

Sound:  I'd say that about half of the original English voice actors didn't have a part in this, which made it a lot less enjoyable.  The original voice actor/actresses for Princess, Hermit, Ifrit, AND the Vice Commander were all different from the first two seasons. :( 4/10

Characters:  mostly flat with no character development other than witch's misunderstanding once it was cleared up 6/10

Date a Live ya esta quemada...

Grading season 3 of DAL is kinda difficult: it was both a step forwards and backwards for the series.

The plot by far at its best this season. They wasted no time like in the previous 2 seasons padding the first few episodes with unnecessary fanservice and pandering with nothing else happening. Sure we got fanservice for a brief moment, but we jump right into the plot halfway through the first episode and from there its off to the races - which is a first for DAL. It was great, for 11/12 episodes.

But that last episode... I've got nothing good to say. From what I've been told from those who've read the source material, they tried to condense a whole light novel in 1 episode - and butchered it badly. They made Shido into a completely bastardized version of himself and it hurts him as a character - even after he cames back to normal at the end. It was so bad that supposedly next season they might be retconing the events of the episode to fix the issues caused by it. Of all the places they could've had a cr*p episode they just had to have it be the last one. I choose to pretend episode 12 doesn't exist and skip it every time I rewatched the anime. Episode 11 is the perfect place for the season to end and there was no reason for this. If you took away the last episode the story would get a 8 out of 10, but that ending scuffs it up hard. No clue what J.C Staff was thinking...

Speaking of J.C Staff screwing up, the animation and art took a major hit under their care. The production on this clearly had cut corner after corner and they didn't genuinely try to maintain the show's amazing visuals of the previous 2 seasons. A lot of the fights were just awful looking in comparison, the airship battle was nothing like the stunning one we got in season 2, and other important scenes were almost ruined by how horrible the art has handled this season. For example, Kurumi's pistol looked a knockoff N.E.R.F product that shoots those fat yellow balls in so many shots - it took a lot of intensity out of some important scenes where she was meant to be intimidating because it looked so rediculous. Wtf were they thinking and who approved this?

Sound was fortunately - as usual - amazing. Date a Live is known for it's amazing tracks and killer intros, and Sweet ARMs did not disapoint. This season's intro, I Swear, might just be my all time favorite OP of all time. All the other background tracks fits into the story and sets the tone incredibly well, it's diverse and well done. Nothing less than a 9 or 10 here, DAL did not drop the ball in this area at least.

Character development is tricky to grade appropriately. The only new main character we got this season was Natsumi and she falls into the same category of character development that Miku had the previous season: Girl with misconceptions about people learns how to accept herself and make friends - while also falling for the MC of course. A few other characters also got small amounts of development. Ellen Mathers was made to be much more of a intimidating and consistently terrifying villain this season - making up for the previous season's issues handling her character. Elliot and Phantom were properly introduced, but they did virtually nothing on screen and wasn't an active part of the story this season. It does lead on towards a deeper plot to be explored for the future, but that's just about it. Nothing really been done with them so far.

The real meat and bones of character growth comes in the form of 2 characters: Origami and Kurumi. Origami finally has her past revealed and over half of the season is centered around her, creating the main conflict of the story and is the central figure of the plot. Kurumi also sees a gain in depth in character as she both aids the antagonist (Origami) and the hero (Shido) through the same means. Kurumi's development was by far the most interesting part about this season, even more than Origami's arguably. Questions still remain unsolved and there's room to grow - which most of the other members of the main cast don't have nearly as much room to work with. While overall growth was low distributed across the board, the 3 characters of focus (Natsumi, Origami and Kurumi) were well done enough to be a slightly above passing job.

Overall, Date a Live Season 3 has a case to be both either the best or worst addition to the series. It had the best and most interesting plot thus far, but the last episode stains it. The animation was alright, but a definite noticable decline from what we've recieved in the past and probably the worst of all 3 seasons. Character development was better but far more narrow in who recieved it this season. The only category that has continued to remain consistently strong is the music (Sweet ARMs hasn't failed us yet :), but in terms of an anime's value that sadly holds the least worth. While the fanbase isn't fully sold on a general consensus yet, I'll go ahead and give my personal opinion: I strongly believe that season 3 was worse than season 2 but better than 1, due to (as I mentioned in my review of season 1) my disdain with the excessive butt and panty shot obsession that season 1 was plagued with. 2>3>1

I'm very glad to see that DAL will not be handled again by J.C Staff given how poorly they almost botched the series. I knew prior to watching season 3 that DAL fans loathed J.C Staff for how badly they handled season 3 - and after watching I can see why and full on agree with that consensus. I have hopes that Geek Toys will bring the series back and better than before to redeem it. Season 4 is set to come out in a few months from the time of this review in April, and based on the trailer the animation looks much, much better than 3. Will certainly be giving it a watch.