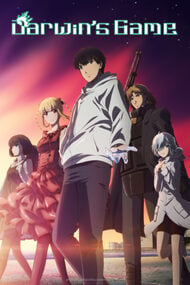 I expected this anime to be quite similar to King's Game from a few seasons ago. It is SO MUCH better.  Plot follows a highschooler Kaname Sudo, who accidentally gets dragged into a deadly game with amazing rewards. As he gets to know the rules he meets other players - most important of whom is Shuka.  This anime offers nothing original, it's your typical high stakes game anime with some battle royale sprinkled in. Characters are nothing special either, some common tropes are present (Shuka being a little yandere, newbie being a natural talent, mysterious information broker, etc.). The first episode is especially mediocre, with some laughable bad guys. However, if you get past that it's a really fun watch with some amazing fight scenes and interesting superpowers. Character development is present as well, some of them have pretty interesting backstories and getting to know more about them offers an interesting insight.  Battle royale arc (which covers a big part of the season) was especially good. It lasted a few episodes but the fights weren't drawn out, strategies characters used were fun and the whole thing ends pretty nicely.  If you're a fan of Mirai Nikki and Battle Royale genre in general, I would definitely recommend this. It's a perfect anime to binge - just relax and don't overthink it, as it's meant to be mindless fun.  Oh and bonus points for great OP/ED themes!

Somewhere Between Edgy and Boring Darwin's Game is quite possibly the best Death Game anime ever. Do these words not excite you? Do they not enthrall you? No? Well that's probably because it's not such a high bar to clear. Death Game anime where a bunch of people fight until one person survives are commonplace in the industry. There are multiple problems with the genre, such that by its very nature, most endeavors into it will be overwhelmingly edgy, and difficult to praise critically because it relies on this trait for entertainment. So how does Darwin's Game rise above the rest like a unenthusiastic dictator who is satisfied conquering only one square mile more than his adversaries? Let's get into the D-game. Laugh now. Characters: In this category is where the show first goes above the usual trite for the genre. You have a rather generic protagonist, sure, but unlike in most Death Games like this, he isn't completely incompetent, overly edgy, too nice, or too much of a wimp. He's not a good character either, but Kaname proves that you can technically have a Death Game protagonist that doesn't fall under one of those annoying tropes definitively. However, he's also quite boring, and is characterized by absolutely nothing more than being the main character in the Death Game show. In that, if this weren't the situation, he would be just a boring, normal guy. And there's nothing that cool about him. So the show has to make up for that in other ways, by providing a decent back-up cast. And you know what? They don't do such an awful job of that. Trying really hard not to look at the camera. Shuka is the secondary character. She doesn't exactly have enough personality to fill her role, but she serves as the "Badass female lead" fill-in that kind of phones in the role. Don't expect to get super invested in her overly smug character who pretends to be unaware of the sexual innuendos she spurts out randomly near the beginning of the series. The rest of the cast are quite decent. Rein is the intel girl, a soft-spoken loli who is apparently hyper-intelligent. Not a bad change of pace for this type of character, she's fairly valuable to the plot and "explains" the very few nuances of it. Ryuuji is the trigger-happy mercenary who gets wrapped up with the group. Sui is a very interesting character with multiple sides to her, so to speak. Liu is the mysterious skilled one. So far, this cast gets a bit of a pass for me since they actually aren't that overly annoying like the main casts of most Death Game anime. They all serve a purpose, and really, there are a few decent ones in there. To boot, some of the more minor cast that aren't entirely relevant are pretty strong too, such as the botanist. The main villain sucks a huge veiny meaty cock though. So just forget about him. It's whatever. Story: this is the weakest aspect. The entire concept of this kind of death game in the first place is just very conceptually flawed. Do I even have to explain it at this point? Only with this one, the difference is the suspension of disbelief is REALLY hard to pull off because of the addition of superpowers. Most of which are very inconsistant and hard to understand, especially considering how simplistic the battles are. The storyline is lame, but they treat it as more complex than it is, spending large amounts of time just explaining things that don't need an explanation or wandering around like it's a Slice of Life to kill time.  It's just not necessary. I feel like they wanted to make it more themed and interesting than other Death Games, but there's nothing to suggest that it should be considered as such. The themes are only skin-deep. And the characters goals are super generic. It's really not breaking any new ground. I would have a lot more respect for this if it was more self-aware, just being focused on fun instead of all this Pretentious Darwin shit. It's not that hard to understand. The game is alludes to survival of the fittest. We get it. Let's move on. The Sound design of this anime is... surprising. It's almost hollywood quality, and sometimes it's kind of off-putting how well this kind of sound design would work in like a real movie. The Sound Effects are amazing. The Animation is a bit more complicated to dissect. While some of the shots and transitions are very neat for an anime about this. They clearly put a lot of work into some of the sakuga, there are moments where the camera does some unusual things and it's pretty cool. But the artstyle is, in my opinion, kinda ugly. I don't know how I should classify it. Somewhere in the middle? It's just not nice to look at during still frames, but when things are moving, it looks good. Overall, Darwin's Game isn't something you're gonna want to sink your teeth into if you're looking for quality storytelling or originality. Despite the areas of boredom though, you might have a decent time watching the action just for the hell of it. 5/10. 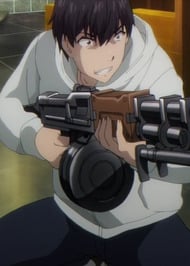 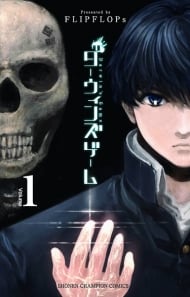 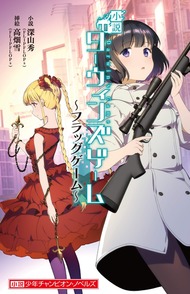