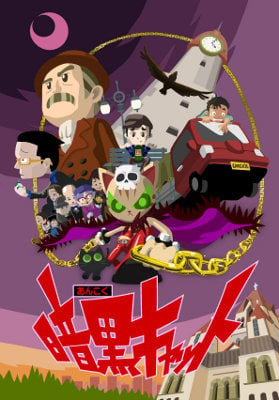 Darkside cat is a strange, interesting show. It’s pretty much about a rebel humanoid cat that gets in trouble a lot with the law. In the course of one evening, chasing after a mouse, he breaks a fire hydrant, creates a traffic jam, and runs from the police. Now this show doesn’t really follow Dark Side cat but really what happens because of his interactions with the people of the city.

He himself is always silent with the same ‘bad boy’ look in his eyes and yet there are times that he actually does seem nice, mostly to the cats around the area. Each story can mostly stand alone, having only Dark Cat to link them together except for 5 and 6 where they pretty much have to be seen together. It’s more talking about the people that he touches and not really about him. One thing I do wish is that we could get more info on Dark Side Cat instead of only hearing very little about his past in Episode 5.

The animation looks like it was created with flash, and its actually really well done as well in that nothing really seems out of place. They have really nice shadows and make them look perfect the dark night that is pretty much the base of the shows. My only problem is that in the animation, there is a character that seems like she would be a man character in the stories but she barely shows up. Action scenes contain a lot of speed lines and still images that seem like Speed Racer at times.

There is barely any talking and more sounds and music which are actually pretty cute. It works well. Basically, I wish there was more of this show.

Years before “Isle of Dogs” there was this.

In place of the canine social problem an abundance of stray cats were a mayor’s target.

Though this mayor doesn’t go as far as to cage them all up and send them off to die. In this story the kitties do as they please as the police fail time and time again to capture their leader, named by the humans, Dark Cat.

This bipedal, cape wearing feline has an insatiable hunger. Episode after episode he’s scarfing down human and cat food alike. Though the hunt for food is not the only thing happening in this anime. It’s thanks to the actions of Mr. Kitty that human issues are resolved and yet he’s not all that likable. After saving a child he may just take candy from her, after leading a journalist to a scandal a bigger surprise may be in store for her, he might even inspire a forgetful father to become a thief.

He’s not exactly a protector of the night, all around good-guy, or defender of justice probably because he isn't trying to be. He just does what he wants and that’s what’ll you’ll get if you watch this. 6 6ish minute episodes about a cat who prowls a city at night.  After all is said and done Ankoku Cat is an enjoyable short anime with an animation style just right for the runtime and slightly dark, child appropriate, comedic story.