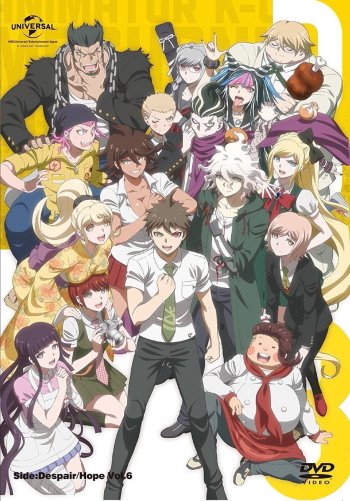 This is going to be a short review since this is only a one episode release and it is mostly a closure thing for the Future Arc.

Danganronpa 3 was split up into two anime seasons and a one episode tv special in order to close out the second arc. With some sort of closure for the Future Arc, Danganronpa 3 is now complete.

So they tried to cram in a “perfect” ending within 20 or so minutes. While they did succeed in crafting an ending it of course felt rushed. It is absolutely a happy ending but a lot of BS things came into play in order for some things to be resolved. Also why are we still left in the dark on how the second game's characters came to be in this special episode? So many things are still left up in the air and it is very frustrating.

Overall this special episode is passable for fans of the other two arcs.

It might have been due to the lack of action shots in this episode but the animation just looked “ehh”. I was expecting the same quality that we got in the Future Arc but it did feel more stale. If you thought the Future Arc's visual presentation was good enough then this passes.

Again passable but I am so happy they fit in the main theme from the second game once the returning cast members showed up.

They are all here but there is like no interaction between members at all other than little chit-chat sessions. The whole episode was focused on providing an ending, not expanding on character building.

This episode takes the story from the Future Arc, and mixes in the characters from the Despair Arc to add a finish to the Future Arc. I found this ending to add very little that wasn't obviously going to happen. On top of that, it actually tossed on more questions and confusion by showing Nanami and Kyouko in the scenes. Something about an AI or imaginary image? The story of the 2 Arcs was doing just fine without having ever played the game, but this must either be explain in one of the games or just tossed in, either way it was a poor choice when a good chunk of viewers will most likely not have played the games.

You can safely skip this episode and come up with a better conclusion in your own mind of how you wanted it to turn out. The options here were whether they are able to stop the Hope video from being broadcast or not and that is answered here, no real further value or enjoyment is to be found unfortunately.

Although i think it's such alternative ending it's too perfect that makes me feel like it would never happen especially with what happened with Kyouko, It was really nice seeing the group full of hope and not with despair as well as seeing Chiaki talking to Hajime. I wish it was longer as one episode so that we could see what would happen to society now that the remnants of despair were full of hope and no longer doing evil deeds. Overall: fun to watch.

This ova serves to end the entire series and directly follows the end of the "Mirai-hen" season, thus forming the "13th" episode.
-
Since this is only an ova with a length of 20 minutes, I will not go into any criteria.

The final episode lost tension because it focused on bringing everything to a emding. But it was in fact a decent conclusion, in which events from all seasons ultimately met and set a final.