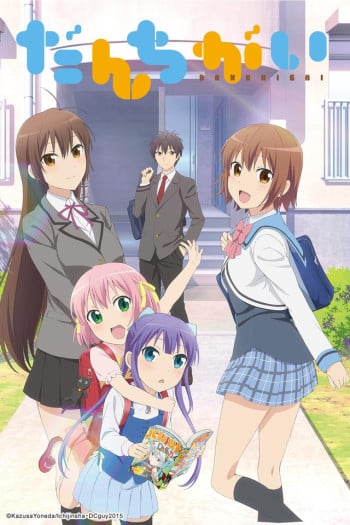 I watched this with the guys doing the daily anime marathon club, and I want to stab my eyes out. the animation was allright but it was nothing special.

If I have to see another incest joke I will murder the writers.

It's better then triage X

I started watching this series on a whim because it was short and needed something to watch while on the bus, which aren't long enough to let me watch a full length episode properly.

Like any series that's 4 minutes long, it suffers a lot in the story department due to it's length and the characters aren't well developed. Of course not everything was bad or below average, the animation was quite pretty and the characters were well drawn. Also the voice acting helped to make them look even cuter (the twins are so cute Rena Ryuuguu would want tot ake them home). Aside of the expected lack of story this aniem has one major drawback and it's the overuse of incest jokes. Not only they were unfunny but they also got annoying really fast.

All in all, this was far from being a bad show, but it also wasn't very good. Watch it only if you're looking for something cute and you don't mind repetitive jokes

This is going to be a very short review because there isn’t that much to tell about Danchigai. Each episode had some comical moments and that was pretty much it. I have nothing special to say about this short anime although there is one thing I do want to point out.

To me the best thing in this anime were the little twins Satsuki and Uzuki and more specifically the way how Satsuki always repeated the last vowel of the sentence that Uzuki just said. I found that to be really adorable and it always put a smile on my face when she did that.

So as a conclusion, I don’t really have a solid opinion on Danchigai and that’s why I’m going to rate it at 2,5 stars. I don’t regret watching it but it’s just not something that I will remember for a long time.

this is a great small sided anime to watch. By having 3-5 minuets every episode, it is good to watch as a side anime instead of a main.

When I saw the working concept of Danchigai (Japanese for ‘Big Differences’ referring to the actions perceived [usually something kinky] and what is real [move on, nothing happening here!]), it touched too close to home.  Haruki Nakano badgered by his four sisters … sounded too familiar.  Haruki is the only son in the Nakano clan, and second-born.  Dealing with older sisters is always tough.  I have a double whammy.  I was the eldest son in my family and second-born …. followed by a sister … and a sister … and a sister.  For thirteen years I would not know what it was to have a brother, and even then in four years I would be off to college.  Little time for play, and that is probably why this tended to turn into a ‘Mufasa-Scar relationship.’  Nothing murderous, just two brothers with different personalities.  Then marriage to a wonderful woman … and four daughters … no son.  A life of forever being out-femaled, and I had this built-in sympathy for Haruki.

In his review, Futureblot had it right.  The thing that ruins the series is the frequent appeal to the incest angle.  In these 12 episodes, Haruki finds himself in compromising situations/positions.  Call it Adventures in the 'Forbidden Harem.'  This is where my chief relief is knowing that the worst my siblings tended to do was scare me in the middle of the night with phantom raids in the spooky backroom, my bedroom.

The four-minute episodes tend to downplay character development.  Heck, there wasn’t enough time for the Nakano parents to make an appearance.  Though, with the help of the manga you can still determine some traits.  Haruki is a gamer, and little Satsuki follows his traits, though she favors oldest sister Mutsuki, who she resembles.  Mutsuki has the aura of being all-together as the oldest and her sisters look up to her as stable force.  Haruki knows better, and older sister just has a streak of insecurity which makes her find refuge in Haruki’s room.  Yayoi is the athletic sister who is moving through middle school and needs tutoring for the high school exams, but she mistrusts Mutsuki.  Haruki is a better teacher.  One of the twins, the pink-haired Uzuki, is a prankster, though her pranks are often ineffective.  Her favorite target  Haruki always seems baffled at her best stuff.  Never malicious jokes, just attempts to embarrass Haruki.

The four closing themes were cute, and it was sad that only the OVA thought of subbing the words to the last of the four.  It takes the viewpoint of the twins, who are happy for the security of their older brother and sisters.  But then again, where’s the parents?

The cuteness of the sisters is over-played in all the episodes, including the 13th OVA, a two-minute visit to the public bathhouse (Haruki discreetly sits down throughout the session.  The girls ... don't).  While not given much time, the action is predictable if you constantly remember the main premise:  Haruki is always put down.  And, with this premise we could crank out more episodes:  E14: Haruki brings home a girlfriend ... dirt and sordid details aplenty.  E15: Covid Craze  ... Mutsuki and Yayoi disagree about masks ... Haruki models the latest styles . E16: Twins Revenge ... however you slice it, no good news for Haruki.  It’s a shame that Danchigai stopped after twelve shorts and a shorter OVA.  the wars of siblings make for good material.  As for myself, I always had good relations with my sisters, and glad that I didn't have to put up with the follies which were dumped on Haruki.