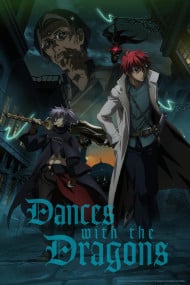 Jushiki, a system for reproducing natural phenomena and paraphysical acts such as the creation of matter, allows humans to wield a power which they once feared as “magic.” Its mastery has brought advancements to all fields of life, while facilitating the extermination of the once-rampant “Dragons” and “Others.” Gaius and Gigina, two combat-type jushiki wielders, run an office in a chaotic frontier town called Eridana, and make a living using their art to solve problems and collect bounties. One day, a dragon-hunting job falls into their laps. But the job is just the start of a plot that goes far deeper…

Calamitous Song of Jushiki and Swords

Ballet of the Winged

Invitation to an Evening Party

Guillotine of Spiders • Time of Snakes

I don't care that the scores don't average out to two, who CARES! DANCES WITH THE DRAGONS IS A SHOW ABOUT A-HOLES DOING POLITICAL WORK. It has one dragon in episode one and a dragon shaped like a human a few episodes in. There are really not a lot of dragons, in dancing with the dragons. Nor is there dancing. Dances With the Dragons refers to nothing about the anime. As I said before the plot is political work for a corrupt government or something. I dunno. These two characters, gay us the elf slayer and the sword guy with the big euphamism and the furniture fetish, go around fighting random monster things, creepy people, and have relationship problems in their weirdly modern/medieval world. The world-building is clunky and sucky. If you want good political drama, look elsewhere. If you want characters worth exploring or hanging around for 12 episodes, take a hike. There's none of that here. Gayus is a jerkwad loser. He's an irredeemable letcher with no abilities or contributions worth noting despite being the protagonist. His friend is an anger management-required bag of dicks with his brain in the clouds and his head up his ass. They have a dysfunctional "friendship" where they try to kill each other every five minutes and its not funny. They are some kind of mages who protect the state for money, but we don't get to see them do that. They battle the political rivals of the corrupt government guy and get into weird situations. There's a lot of conspiracy stuff going on behind the scenes that makes absolutely no sense. I want to know why we need 10+ scenes of gayass's friend making cupboards. I wonder why we need to see gayus's sex life with his wife. Why do we need to hear the inside of his head, wanting to take advantage of random women. Why does this anime want us to hate it so much. We'll never know. I found nothing to latch onto with this show. The dragons themselves in episode one were misleading as was the magic and combat. The quality in animation and sound took a swandive immediately afterwords leaving nothing of value anywhere in this damned show. I doubt anyone else will review this so I'm shitting this out right now for you guys, just to tell you the nothing you're getting yourself into. Dances with the Dragons is a nonsensical failure of a fantasy anime. It's not the kind of bad that's fun, it's just boring and terrible. The lowest common denominator of bad anime. Avoid at all costs. Reviewed for Anime Lottery Game

There are two types of light novels, the first type is the ones with two lines long titles, which generally suck ass, the other type is the one with moderate titles, which also generally suck. The Title Dancing with the Dragons for this show is the equivalent of putting boobs on the thumbnail of a youtube video, the author came up with this cool show about dragons and magic, and after the first chapter decided to replace all the dragons with not as cool political conspiracies. For a more accurate describtion, if a different show called "Reciting poetry with the Dragons" existed, it would've most likely been a more entertaining experience than anything this show aspired to be. A more befitting title would be "Boredom without any Dragons", or "How to waste four hours of your precious short life: Shitty Light Novel adaption edition". Based on a Light novel by the same misleading name, a light novel that it's not only baffling how it got an adaption, but it's also questionable how it got published in the first place. The story revolves around the political strife between the dragon empire and where ever the hellour main characters are supposed to be living, if this sounds mildly interesting to you, I'm sad to inform you that we never see a dragon in a suit yelling about free healthcare system. The show focuses on two completely uninteresting characters, Gigina, or Gigina Jardi Doruk Meleios Ashley-Bufh for short, and Gayus, who sadly doesn't have a badass name like his friend. Together they fight against everything that threatens their city and their everyday peaceful life, but not before they fight with each other twice an episode for no good reason, and make love with their elf girlfriend or furnature or whatever weird fetishes they have. The show opens up with them giving one of the most mind numbing expositions scenes I've seen in a while, as they explain their jobs and the wolrd's terminologies in detail to each other, as if they're preparing for a history exam. And if you're wondering, no that scene doesn't reflect the dialogue quality throughout the whole series, because it's waay worse. Trust me when I say, outside of context, this line makes as much sense as it does in context.   The show's setting is admittedly interesting on the surface, it's a high fantasy that has a modern society and technology, in this world humans, elfs, and othe creatures live together in harmony. But don't expect those things to be touched upon, after all the author gave them as much attention as he did with the main characters. So instead we get to enjoy the characters constantly having the same fight all the time, because if it wasn't funny the first time, it sure will be after the 20th one. Right? In fact the it's SO empty of anything that by the end the show itself was sick of itself was dead serious in trying to kill any chance of any sequel appearing that it LITERALLY killed off the main villain off screen, and made sure to state is clearly as possible that the other one won't be doing any more evil, ever again. Not that I mind that, in fact I'm very happy that the show itself doesn't want it's miserable existence anymore. Though the show isn't completely without any redeeming quaities, the voice acting is great, and by great I mean amusing. Most of the voice actors almost feel like they're bored to death and sound like they're barely awake while they're reading their lines. Not to mention that the show managed to pull towards it not only Sugita, but also the Tim Curry of the anime industry, freakin' Wakamoto, and I fucking love that guy. There is no reason to watch the show, unless you plan on watching it ironically, or for Wakamoto, other than that don't touch this thing.

So this one was alright. It could of been so much more. Story - It was doing good with the story arc with Nidvork and her need for revenge, but after that it kinda went down hill. The rest of the episodes were oversaturated with conspiracies, politics, and it made my brain hurt when I was done watching. Don't get me wrong that stuff is good for a story, just not for the entire anime series that seems to introduce more then that from watching the first story arc. Animation - Everything was crisp and fluent and fun to watch. Good detail and what fight scenes were there went very well with no issue. Sound - Music wise it was pretty good, closing credits after the first story arc was nice to listen to. Characters - There was a good variety of characters and some creatures, but I think it needed a little more background explanation. It was touched on in the last episode in a flashback, but to me I felt it was just to late for that. As I said it did have a variety of characters, but also some were mentioned, but never shown or were part of the story. Overall - Like I said, it was alright. If your into political/conspiracy stuff the rest of the series would be right up your ally. If not then at least watch the first story arc. 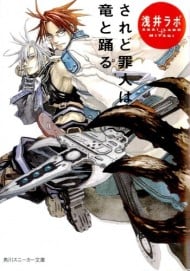 Dances with the Dragons (Light Novel) 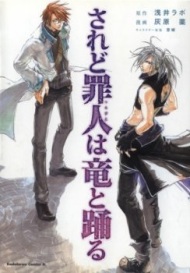 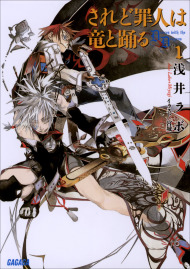 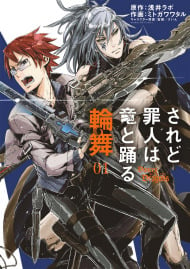 Dances with the Dragons: Rinbu