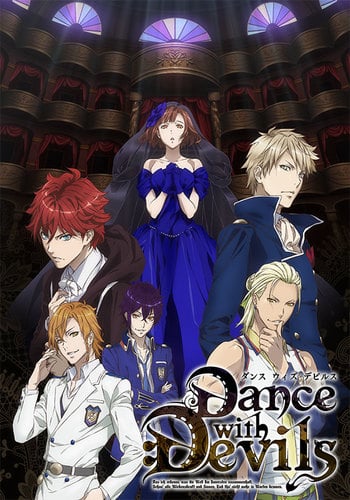 They All Want to Marry Me! Help!

When God closes a door, he opens a window—oh! not A WINDOW, but many fancy FRENCH WINDOWS! The day she was dumped by her ex, she was defended by a handsome white-haired guy, who claimed to be her fiancé before kissing her.Still angry with the unexpected kiss, she rejected the man, yet the next day she somehow ended up in another long-haired man’s dorm. The latter half naked, just out of the steamy bathroom—proposed to her upon knowing her identity.No time to be surprised, as the third so-called fiancé showed up, equally handsome, rich, poised, and possessive…In a relationship involving four, how will this girl manage to deal with her 3 fiancé candidates?

I recommend this anime because just like in the Manga "They all want to Marry Me! Help!", several guys fall in love with one girl.

Dimitri Lewandoski is a celebrated tenor in early 1900s Vienna. When he is killed in an accident, his corpse is colonized by the seeds of a vampire master. At first, Dimitri denies that anything has changed, but as the people around him start dying, he is forced to accept the ghastly truth. Flash-forward to 2008. In Tokyo, Azusa Kikukawa’s troubled love life comes to an end with a fatal accident. Dimitri appears in her dying dreams with a diabolic proposal he will save her lover if she agrees to become the breeding ground for the next generation of vampire seeds...

Hot demonic lords appear one after another, all aiming for Haruka, who doesn't have a single relative! It is said that the one who gets Haruka will lead the way to happiness for their family, but...?!

The World of Lilith

Lilith, a 500-year-old vampire, is determined to leave her harem of pretty boys! Will she be left alone in the human world? Or will she starve herself?

Stephen and Shukurei are vampires who met and decided to travel together. One a half-demon, the other a subspecies. One lives for the sake of atonement, the other for the sake of revenge. In the midst of the journey, Steph drinks Shuku's blood and experiences once more the warmth of companionship. But when they arrive at Steph's hometown, the past begins to catch up, torturing Steph with sorrow and contrition. Shuku's father, whom they meet during the journey, reveals a startling fact, and Shuku intends to fulfil Steph's unexpected wish. What will they find at the end of their journey...?

The new school Riria has just transferred to has a lot of people with suspicious abilities. There are vampires with fangs and the snow devil, son of the snow fairy. And then it turns out that Riria is a demon who sucks the life out of the people by kissing them!?