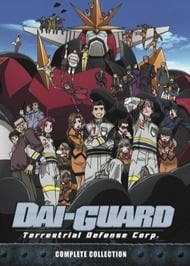 A mysterious alien race known as the Heterodyne suddenly arrive on Earth, wreaking havoc and destruction. In response, the 21st Century Security Corporation develops Dai-guard, a giant robot to counter the threat; but the Heterodyne vanish as quickly as they appeared and Dai-guard becomes nothing more than a publicity tool for the corporation that developed it. Twelve years later, the Heterodyne return – but unfortunately, Dai-guard has fallen into disrepair. What’s more, no one knows how to pilot it... that is, until three public relation workers from the company unexpectedly find themselves in the driver's seat! It is now up to Ibuki, Akagi, and Aoyama to prove that office workers can save the world!

Disaster From the Sea

The Fort at Night

Circumstances of a Hero

Wages That Correspond to Justice 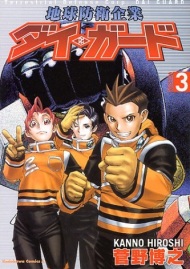