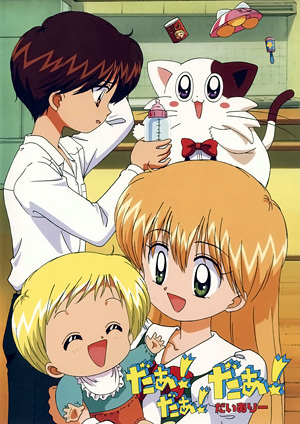 I saw this anime a couple months ago and I decided to make a review as for now, I have also finished reading the manga.

This is a really cute anime! I really like it a lot. Even though its targetted to child audiences it really shows important values, character development and depth which surprised me!

The story takes a simple background with unusual circumstances which combine perfectly, along likeable characters and comical elements. Not to mention my favorite part of the storyline, which is the (spoiler!) developing of the relationship between the main characters Miyu and Kanata. It's just so cute and perfect!!

Now coming to the anime vs manga thing: It's really unexpected for me to say that I actually like the anime more. After finishing the anime I just wanted to see again (and more) of Miyu and Kanata and the other characters. Tha's why I read the manga (took me 2 days, its actually shorter than what I thought) and now I understand why. The reason why I prefer the anime is mainly the length and the additional moments (not taken from the manga) that I got to experience in the anime. In the anime, I could understand (and in a way ship more hahah)  Miyu and Kanata's relationship, not talking only romantically but also, as their personal development. Also, I think there are some episodes from the anime that I'm sad not for them to be part of the manga, as well as characters. So yeah, there are some slight differences... Still, but of them are genious and heart-warming.

But to end it, I enjoyed this story a lot and it was more than I was looking for!

I felt somehow sad when I saw that there is no review yet for Daa! Daa! Daa! so am I writing one now.

I used to watch this when I was a kid. One of my favorites shows, so comforting and a good laugh. I still remember when I first saw this with my sister. This was dubbed in Tagalog; my sister called this show “boy meets girl” but I found out a little later that the actual title was UFO baby. And just couple of years ago when I looked it up and to watch this again the original name is Daa! Daa! Daa!

I was so glad I found it; this show saved me from my good old boring days when I got fired. A classic romantic comedy, a typical story of two kids, a boy (Kanata) and a girl (Miyu) unexpectedly must live together ALONE. Miyu’s parents need to work in the USA to fulfill their long-time dream and must leave Miyu’s at Saionji’s care. However, at the very night of Miyu’s arrival Kanata’s dad, Hosho, got an invitation for a pilgrimage from his Monk friend in India. Both Kanata and Miyu tried to stop Hosho to leave but Miyu let him go when she heard him said the magic word long-time dream. But there’s more, before the night ended, the alien baby Ruu and his sitter pet, Wanya, arrived from a far far away Planet Otto. From then, the four of them live together until the two aliens find a way to go back to planet Otto.

Daa! Daa! Daa!, does not have a grand or dramatic plot. Some of the scenes are pretty much funny and would call it same old same old but they do still work. Watching Miyu and Kanata live together and how they struggle to maintain a peaceful normal teenage life without being discovered that they are living alone together, not to mention they are harboring aliens is pleasantly silly. Did not only shows the lives of teenagers and their friends, it also illustrates the dilemma of becoming responsible parents, since they need to take care of baby Ruu. Despite of the capable sitter pet Wanya, they are baby Ruu’s Mama and Papa in planet Earth since they resemble Ruu’s parents in plante Otto. It was amazing how both characters grow to love Ruu and develop affection to each other, becoming a one happy loving family. It is painful to watch when they finally part ways. Worry not, this is actually a happy ending. :P 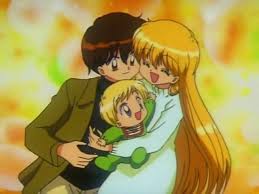 The animation my not be as beautiful as the new ones but considering the time they aired, it was fairly drawn and got a pleasing display. All characters are cute even the bad guys, they are silly cute but still cute.

On a different note, I just wish that Kanata and Miyu are drawn more mature. It is sort of awkward to see them as baby Ruu’s parents. But it is still apt to their characters, since their ages are 13 -14.

The soundtrack are catchy and songs are nicely written for the series. Surprisingly cute love songs.

The character growth was seamlessly shown all through out the series, from being chaotic clumsy teenagers to become responsible parents to Ruu. Despite some silly alien fiascos, along with Wanya, the sitter pet, all four of them can get along with their friends and even with the villains.

She always daydreams at the earlier part of the series and her bubbles are often being burst by Kanata. Smart, friendly and caring, especially with baby Ruu. A terrible cook and always fights with Kanata. Tough Kanata teases and bully her a lot, she learns to like him especially when he takes care of her in difficult situations. She’s a very pretty girl and almost ended up becoming an IDOL.

He’s very popular with the girls, because of his good looks, his intelligence and he is good in sports too. He has a supper strong fan stalker named Kristen.

A tsundere, he always teases Miyu to hide his growing affection to her.  He has a protective side when it come to the people he cared about, especially Miyu. He is more mature than his dad and often corrects his own father. He is great in cooking pumpkins, since it is his favorite food of all.

The alien baby from planet Otto, he has a power to lift things including himself with this mind. In other words, telekinesis and levitate. He can also understand everyone, however some of their unlikely adventures are caused by Ruu’s power. He sees Miyu and Kanata as his real parents, calls them Mama and Papa. He doesn’t like Miyu and Kanata fighting and cries when he sees them do so.

A cat like, sitter pet alien from planet Otto. A self-proclaimed very capable sitter. He also acts as Saionji temple keeper, he takes care of Miyu and Kanata, do chores and almost act like a butler. But his priority is taking care of baby Ruu. He loves eating mitarashi dango, he as the power to take any form he chooses. He often appears as young Mom or Dad, depending on the situation.

There were no dull moments for me even it was a bit long (78 episodes). Each episode has a mixture of little romance, lots of sillyness and tiny bit of drama. There are a few episodes that I found emotional, but still soothing and warm. You might say this review is a little bias, since I rerun the series in rather distress circumstances, but boy, this is a total life saver. Ha ha. I would recommend this to any friend in any situation; happy, stressed or just plain bored. A classic loving warm anime.