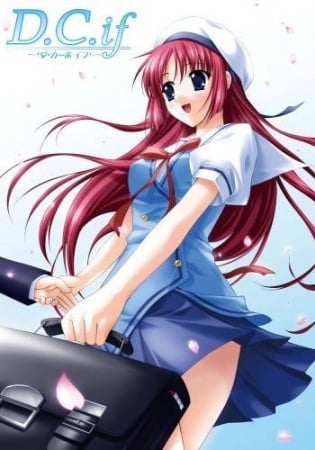 Time and time again a “used to be popular” franchise releases an OVA, in order to revive itself and Da Capo: If just felt like another attempt to do so.

Da Capo: If is a Harem, Romantic, Comedy, Drama(?) that follows the same old story as its previous incarnations, not sure where it fits into the timeline though. Junichi is a guy who has somehow attracted a large female following. Although this time round the magical aspect is played down and Kotori fans are offered some fanservice, since the all important “what if he ends up with Kotori?” question is answered. Like most of the people who preferred Kotori, amongst the Da Capo girls, I was expecting great things from this short OVA. Yet it comes to no surprise that this turned out to be quite the disappointment. Yet what really surprised me was that the whole thing felt like it was too long and that became its major downfall. The story literally begins with Kotori about to get married and we’re supposed to flashback to see how it came to pass. But sadly the writers decided to pad the story with clichés, you will see coming a mile off and pointless character interactions.

The characters are the same as ever however after sitting through 4 series; seeing the same old faces, with their rather annoying quirks (banana girl) can be more tiresome than paying attention to a dull Math's lecture. So whatever characters you liked in the previous Da Capo series, you will like here and whatever character didn't like... just don't expect shift in your own opinion.

Sadly this is the same case with the animation and soundtrack, as they have both remained unchanged. Not to forget that this is from the style of the Da Capo series & not the Da Capo II series, so everything just looks & sounds older than it should be. At least the die-hard fans of the Da Capo series will get a sense of nostalgia after hearing the 2 insert songs used.

Overall Da Capo If did give an answer to a question that I’ve had on my mind since starting the series… was it a good answer? You tell me. All I know was that it was dragged on with the most trivial issue imaginable; making the drama it was supposed to have, quite laughable. At least the romance was rather refreshing and having a story focusing on Junichi & Kotori was a great idea however one thing I would like to know… what on earth happened to Nemu?