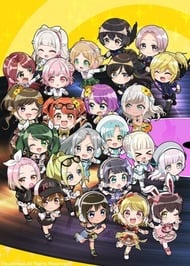 397 users are tracking this. Log in to see stats.

With D4DJ: Petit Mix you begin to understand the workings of (cue the theme music for Also Sprach Zarathustra … now!) FRANCHISE! I saw it all before with BanG Dream! and their exercises in chibi entertainment, a comical view of the girl band scene without the friction and drama.  Hey, in chibi, even a Donald Trump could look cute (maybe)!!!  So along came BanG Dream! Pastel Life and BanG Dream! Girls Band Party! Pico (then Ohmori).  Through these film shorts, you got to see your fav band girls drawn up at full-kawaii mode.  You didn't see much of a plot, or something dragged along until the very end so you could say 'Oh, that's how it ended.' D4DJ: Petit Mix follows the same plan.  Three-minute episodes (at time of review, 18 and counting).  The first 6-8 work to introduce the six-team squadron of girls' performance groups.  If you've seen First Mix, you are already acquainted with Happy Around, Peaky P-Key, and Photon Maiden.  You only have to catch on to the chibi form for these dozen (Muni was hard to get used to if the bunny ears went missing).  You will meet new groups as Merm4id (no, not a misspelling!  This group, while following Photon Maiden's style, has a tropical spin to their music), Rondo (gothic feel to their music, a group dressed in black), and LyricaLily (a group from a Catholic school, making their music 'sweet and innocent’). Once you meet the DJ groups, there follows a set of episodes where the girls cooperate with each other (let’s all investigate the inner workings of a spa, okay?).  Then comes U4 Fes.  Then the episodes become more competitive to be the best at the fest.  Interspersed are episodes which feature the girls of Happy Around.  Muni wishes to know the secrets of 'cuteness' and is willing to learn them from her cat plushie.  Rei wishes to master instruments other than the piano; Rinku offers her an arsenal of African folk instruments to showcase at their next concert. There is a surprising flow in storyline with all these mini-episodes, but it is along the lines of follow a premise for a few episodes, drop it for something else.  The animation is colorful if only to follow a group's color palette.  Bright red seems to be big.  But the flash of scenes plays out slowly, then rapidly.  Subbers will need to read quickly.  But the music, like the BanG Dream! chibi pieces, lack the melodic power of the series.  The same theme music at beginning and ending.  Nothing like the new song every episode of First Mix (or BanG Dream! for that matter). Still, chibi is more like a 'fix' for the mix.  It satisfies the longing to see more of the D4DJ concept, to have the excitement levels at a crest before that next season pop up.  With the idea that popularity drives anime and manga, chibi showcases are for the devoted fan.  If not, you take in a lot of silliness. But that isn't entirely bad, you know.