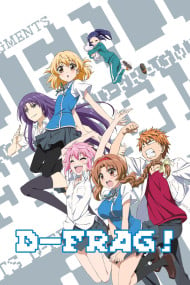 Story: You know how much I- Stop, hold it. Hold it, stop the review. Cool. Think of this as a disclaimer from the editor, who is also the writer. To be frank, read the manga. Not just because it's longer, but because it's funnier, more entertaining and the anime cuts out some of the jokes and gags. For those who read it, it's just not as good as the manga but is still a good adaptation and has a few easter eggs to be found with a cameo or two. To those who haven't watched it, it will be entertaining with some pacing issues. Again, read the manga. Back to the review, paused for your convenience. -anticipated this? A lot. Like "someone anticipating the anime adaptation of their favorite manga" a lot. Did it deliver? Yes. Did it meet all my expectations? Nope, and things rarely meet one's expectations perfectly. On it's own, it's entertaining. The backbone of the comedy is "boke & tsukkomi", or straight man, funny man, with Kazama as the straight man 95% of the time. And it happens a lot. To it's favor because he acts accordingly, practically yelling half his dialogue as a reaction and punchline to the world and hamming it up. Also included are gags, more punchlines, lunacy and even some slapstick, really good on it's own right and works some nice running gags of it's own. The actual plot? It covers at least 32 chapters, 35 (+/- 3) and it's... not that big on plots. More on comedy than an overall plot but the writing's there. It does suffer from pacing issues by having episodes/arcs that go on for a bit too long but it hits more often than it misses. Animation: Pretty solid, liked the look of it and when it delved into fanservice, it was good. Really have nothing to add here. Sound: The OP is good and the lyrics are utter nonsense. Can't really remember the EP and the voices were real good. Kazama plays his part well and always enjoy a hammy character. Nothing much to add here. Characters: First, needed more Funabori. Adorable, sweet, cooks, so kind and is the perfect wife. Everybody knows it and most things she does is played for laughs for how adorable she is. And a personal favorite is Noe, Kenji's little sister. She's just like her brother, and they notice it. One more And, Tama-Sempai. Just adore her. The characters overall I adore. They have enough to make them more than just names, work the comedy well, have good chemistry and while it doesn't delve heavily into the past for the characters, there's still a backstory that plays out quite nicely. None were annoying to me and any qualms I have is some not getting enough screentime. Overall: It's a solid show. On it's own two legs, it's a good show and I really enjoyed myself watching it. As an adaptation, it was lacking and wasn't on par with the manga. For a fan of the manga, it's still worth a watch and while missing some comedy moments or altering some jokes, it still has enough of the jokes from the source material and Shawn Conecone to at the very least be a good watch. But seriously, one last time: Read the manga before watching the anime. Optimal enjoyment.

Apparently, this is an aquirred taste. I've seen plenty of reviews that say it's great and funny and deserves a second season. In my opinion, it wasn't bad, but I don't see why it should be rated so high. I mean are we all watching the same D-Fragment anime? Story- Where is it going? What is the ultimate problem/conflict? Who are the characters? Why is the story wasting so much time? What is this story about? What is the storys purpose? I don't get it. The characters are undeveloped. We don't really know much about them except some random flashbacks and a bit of who they are on the surface. It's not like the characters are really sterotypical so that they don't have to be developed much. As far as an overall problem, people keep trying to shut down the club, and little skirmishes arrise in between, but there doesn't seem to be one underlying conflict that is maintained throughout the story. Without that, it's a bit harder to get excited about watching the next episode. I've read reviews say it is hilarious, but I don't think I laughed once. Honestly, it was all a bit too random and undeveloped. Most of what I assume was supposed to be comedic was amateur and in almost every average comedy out there. On top of all that, it seemed like there were "filler" episodes when there really wasn't enough time for "filler" episodes. Honestly, where are the basic parts of a story here. Where is the beginning and the end, or at least the pause? Where is the climax? Where is the turning point? What is the purpose of this story? What is supposed to make me care if there is another season or not? Overall, I give the story a 3. It just didn't feel put together or well thought out at all.  Characters- Like I already said, they weren't developed. Now, it's a twelve episode story, so they could have used steryotypical characters to get out of having to develop the characters. They did for some of the minor characters, but the main characters aren't. Maybe the main male character is a little, but the females are all over the place. It could be funny, except it's not. It's just lacking. Also, it's not really clear what the goals and desires of each character are. I couldn't really understand any of the characters, their true motives or feelings, or their goals. I feel like the surface was barely scratched on the majority of them. Overall, I give them a 4. They seem like an interesting variety if they were just developed more. Animation- The style is bright and clean. I would guess the brightness of colors is supposed to add to the light and comedic feel the story was going for. I certainly can't agree with the way they made all the characters look, but I can be kinda picky about that. Overall, I give it an 8. Sound- I really hate having to review sound. It all seemed fine to me. It wasn't very useful to the story in many cases and the opening was really annoying after hearing it twice. Overall it gets a 7.  In conclusion, if you don't give a crap about story, go ahead and try it out. If it's easy to make you laugh, go ahead. Maybe you will like it. Maybe if it got a second season, it would be better, although I won't hold my breath. If you are super bored like I was, it still passes the time okay.

i want to call this a romantic comedy but the girls are so scarily violent even the punks wont mess with them. im not sure anyone could get over their fear enough to like one of the harem girls. they are not your typical cutesy love birds for sure. they are all crazy, hyped up nutters. but it makes for one hell of an amusing show let me tell you. Kenji (the main male) learning to navigate life with these girls in it is comedy with a touch of romance at its best. 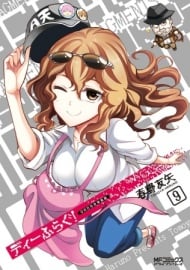 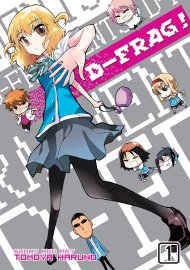