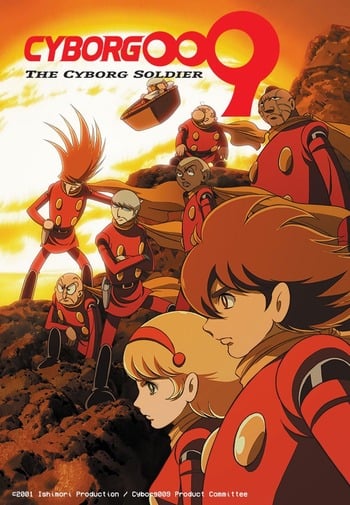 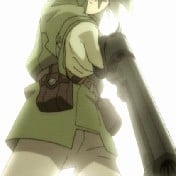 Gunslinger Girl and Cyborg 009 might have different plots but the premise is the same. Normal human beings are basically taken away by a mysterious organization and are given new parts to amplify their abilities and become superhuman.

Though Cyborg 009 is about a female assassin and Moldiver is about two people who share a high-powered suit, both have the same campy, 60s-style feel to them as far as the villains go. This might be a stretch, but try out one if you liked the other.

Old school anime from Shotaro Ishinomori's hands, full of (then) hi-tech cyborgs and machinery and dark conspiracies, not to mention his very peculiar charades!

Gun Frontier: a sacred land for true men; a place where the weak aren't allowed to dream! Tochiro the samurai, the former sea pirate Harlock, and the mysterious Shinunora are searching the western front of the USA. They must face bandits, corrupt sheriffs and many other dangers; but even if it means tearing Gun Frontier from end to end, Tochiro will stop at nothing to find a lost clan of Japanese immigrants. It is they who can help him locate and rescue his sister, a master weapon smith who was kidnapped for her abilities.

Gun Frontier and Cyborg 009 seemed pretty good to compare them to each other.

Both of the series involves working to a goal, and the only way to do this is by fighting. In Gun Frontier you have a samurai who wants to get his little sister. In Cyborg 009 you have a group of people who just want to escape and help the other future cyborgs.

If you liked one, then you of course will like the other.

Both show explore the same values about android ethics and have similar action scenes. The, at times, dark atmosphere is also similar.

You can destroy his body, but you can't keep a good crimefighter down. The villainous Saucer Lips learned the hard way when he killed police officer Peter Brady. Little did he know he actually would create his greatest foe, the bionic superhero known as...Tobor, the 8th Man!