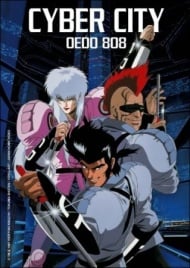 In the year 2808, criminals are no longer just wasting space in prison cells. The Cyber Police have turned to using these “patrons” by giving them a choice. Their sentence, or to work with them to catch other criminals and knock some years off their sentence. But getting off easy isn't, as each criminal is fitted with booby trapped collar that operates on a 24 hour cycle, stopped ONLY if they capture their intended targets. As time runs out on each case, someone's head must roll... the target's, or their own!

Can't believe theres not a review for this here, anyway this is one of my personal favourites, beacuse it just has a lot of what I like it anime and ofcourse Yoshiaki Kawajiri characters and violence. Story- Okay so the story is set in the future and it revolves around these 3 criminals who have VERY low chance for parole, but they have some unique skills. So what happens is that if these guys do what the government tells them to, they can reduce the amount of years on their sentence. There are 3 episodes and each focuses on one of our main characters. I really enjoyed the first 2 eps, but I though the third was a bit lacking and trying too hard to be actually good, instead of a fun gore-fest, with a somehat understable plot. Atleast it had a robotic panther that shot lasers from its mouth... Animation- If your a fan of such works like Vampire Hunter D, Ninja Scroll, Highlander and Demon City Shinjuku, you know what to expect. Very detailed character designs, fluid animation and lots of great action scenes. Sound- The OST has a very 80's feel and if you don't like 80's music you are not going to like this very much. The version I watched was the U.K version and apparantly it has a different sountrack and the opening theme just kicks ass. Characters- Well like I mentioned there are 3 main chars Sengoku, Merill and Gabimaru (it's okay I couldn't take him seriously either with a name like that). Each of the episodes focuses one of these guys and I think they use their run-time efficiently. Personally I think Merill's ep and development was kind of weak, but aside from that they are your typical anti-hero guys with hearts of gold. Overall- A very fun 3 episode OVA. Not something you should take very seriously. Just watch and enjoy and obviously if your not into violence, cyberpunk and explosions and what not, your probably not going to find this very entertaining.

Sometimes I want to watch something that just gets right to it and know exactly what it wants to be. And one of the best examples of something like this is Cyber City Oedo 808In the year 2808, crime rates are at an all time high. To help try and lower the crime rates, the Cyber Police unit decided to employ hardened criminals with talents suited to certain jobs by promising to reduce their sentences if they comply. This 3 episode OVA follows three such criminals, Sengoku, Gogol, and Benten, who happen to be serving more than 300 years each in an orbital penitentiary. And to keep the criminals in check, they`re forced to wear collars that can be remotely detonated, killing them instantly if they don`t complete their missions on time or try to escape.And right of the bat it`s a shame that this is only 3 episodes long. Maybe it didn`t deserve a whole series, but it would have been nice to maybe see a few more episodes. But unfortunately this was release right before the Japanese Bubble Economy burst and the copious amounts of money that Japan had was drying up, so any hopes for a smaller OVA like this one getting more episodes was out of the question. Hell, it`s amazing that it got a blu-ray release with an almost hour long retrospective. A lost of highly acclaimed anime don`t even get that.But it`s 3 episode run is actually used effectively, with each episode focusing on one of the three lead character, meaning that each character had enough time in the spotlight to get some development. Sure, it`s not the most fleshed out series, but there`s something to it.The first episode focuses on Sengoku, sent into try and save 50,000 people trapped in Oedo’s largest skyscraper after it’s central computer is mysteriously taken over, with the only suspect being a dead man. The second episode focuses on Gogol, who is up against a military cyborg as he crosses paths with his ex-partner. The third episode follows Benten, who investigates one man’s quest for immortality, as well as comping across a young woman who seems to have been transformed into a vampire with telekinesis powers as a result of the quest for immortality.Cyber City Oedo could have easily been a complete schlock-fest, going all in with it`s premise and making something silly and campy, but it instead takes a more serious approach and it ends up being a more memorable experience because of it. Because each episode focuses on a single character, it can focus on each characters strengths and character traits, giving each episode it`s own self-contained tone while feeling like a part of a whole.But the anime does show it`s age to some degree, especially with the English dub, which is awesomely cheesy. This was dubbed by Manga UK, and per usually with their dubbing, it comes filled with lots of unnecessary swearing. I was never really bothered, since it adds to the already cheesy nature of the series, but I can see how some people might be annoyed at the strenuous amount of cursing. Of course, this leads to this OVA`s most infamous line "You wouldn`t recognise a goddamn Vampire if one jump up and bit you on the end of your fucking dick". Sure, it goes in a different direction that the original dub, but it`s not with it`s merits, and the voice actors do a good job with what they were given.There were actually 2 different versions of the dub. Both use the exact same dub, but the soundtrack in the UK version is completely different to the original. The soundtrack for the UK version was done by British musician Rory Mcfarlane. He did so some score for some more obscure video games and anime, but he had a much more prolific career as a session musician for Richard Thompson`s bad, which is an English singer, songwriter, and guitarist. This version used to be harder to find, but with the release of the 2021 blu-ray, it should at least be a bit easier to find. The soundtrack in the UK version is appropriately cheesy rock music very much sounded of it`s time.But while the UK music has both it`s energetic rock moments and as well as more upbeat but enjoyable atmospheric tracks, the original soundtrack has a few enjoyable songs too. The stand out track would have to be the ballad “Aishiteru kamoshirenai” (Maybe I’m In Love With You) by Hidemi Miura featured as the ED. Both versions of the soundtrack are fantastic in their own rights, but for completely different reasons.Cyber City Oedo 808 might come from a different era of anime, but it’s one of the stand out titles from that time period, when the anime boom could produce some more unique titles. It’s not perfect, but it does have a ton to appreciate, such as it’s setting, animation, soundtrack, and even characters to a certain extent, and is highly entertaining. Cyber City Oedo 808 comes highly recommended.

The OVA has 3 episodes  each focusing on one of the 3 main characters which each having their own thing going on. As far as the story goes neither is very fun despite being well writen, the first episode is the most story heavy and with the most things going on, the second is more action heavy and the third being the weakest one overall. The animation is a little above average but is made much better by the amazing character design and overall art style. The first episode has amazing effects, the second good fights and it seems to me, a better animation overall, and the third is like the first sans the cool effects. The characters are cool each in their own way with enough back story to make you understand a little bit more about them. All in all I would recommend this for the overall package but don't expect it to be very fun.