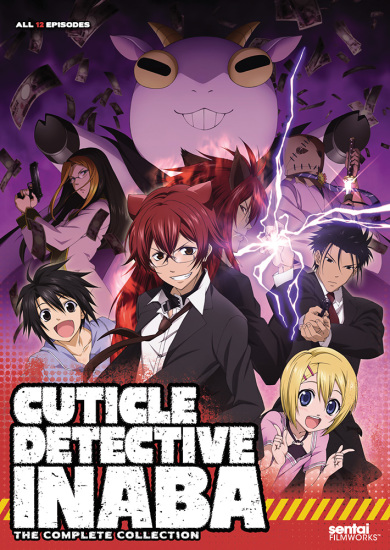 Type of comedy in the series similar to: Bobobo-bo Bo-bobo, Space Dandy, and Dog & Scissors

Cuticle Detective Inaba follows detective Hiroshi Inaba as he tries to pursue a criminal who happens to be a goat. He eats real money and the police are hoping to capture him once and for all but he is really sneaky.

Hiroshi and his partner Ogi and his assistants get close to finding Don Valentino the goat criminal but due to their numerous silly fumblings along their way they never accomplish their goal. Still it is fun and hilarious to see just how they go about things in solving crimes. It helps that many of the allied criminals alongside Don Valentino are pretty nutty. They are almost as nutty as Hiroshi and his friends.

The theme songs are suited nicely to the anime. The Opening Theme Song sung by Junichi Suwabe (Hiroshi Inaba) sounds in particular really wonderful. As for the Ending theme song it is sung by Toru Ohkawa (Don Valentino) which is incredibly sad yet cute. As for the voice acting all the characters do an amazing job to highlight how funny it can be and their performances make this series just beyond good. Voice actors and actresses that stand out are: Junichi Suwabe, Miyu Irino, Kousuke Toriumi, and Ai Fukada.

I had also seen this series when it first began simulcasting as it aired. If were to be asked if recommend this series: It would be an instant yes!

If you're looking for a laugh then you've come to the right place. This anime is packed with fourth wall breaking comedic goodness and a collection of awesome characters. The story is pretty funny, a werewolf with a hair fetish works with an invincable police man who happens to be #1 doting dad ever Are up against a Mafia boss goat who always gets away. There's a crossdressing assistant who wants to kill anyone who gets too close to her boss and then we have a logical character. This anime is something you need to watch, the art style is wonderful, it's funny, the characters are all loveable [especially the villains], and the antagonist is a goat. What more do I need to say to convince you?