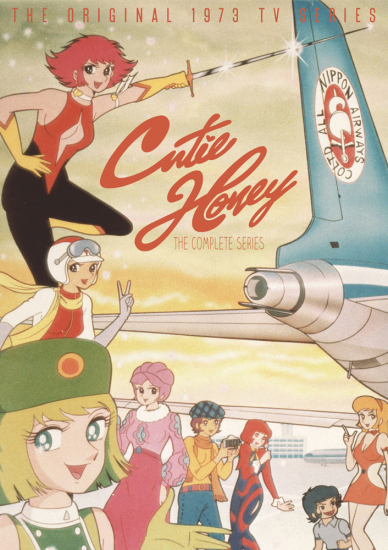 This anime is yet another brainchild of Go Nagai. Yes, that guy again. I have already mentioned how awesome he was for making the (then original) Mazinger Z and the not-so-good in the anime version Devilman. I also said how he liked nude and erotism and this is a fine example of how far out he was for his time. Cutey Honey is actually the first multi-genre anime, as it combines several genres that up to then could never be seen together. First of all, the story is following the archetypical sci-fi of that era. The protagonist is a robot made by a good scientist who was killed by his other evil creations and who now seeks revenge against their evil organization while trying to live a normal life. One could easily go back and see how Osamu Tezuka’s Tetsuwan Atom had a similar story (Atom was a robot boy who wanted acceptance by his father and the world in general), combined with the story of Tetsujin 28 and Mazinger Z (the lead robot’s creator was killed by an evil organization). If I stretch it even further I could even say that it is very similar to Shotaro Ishinomori’s Cyborg 009 (people turned into cyborgs and fighting the evil organization that did that to them). I didn’t review the last title by the way; it was way too simplistic and Kamen Rider owns it anyway.

So one would think that this anime is just another rehash of previous titles and nothing more. I mean, back then there was a really narrow variety at what such stories would be about and nobody minded as the target audience was just a few thousand underage kids. But then again it’s Nagai we are talking about here; the dude who loved to take other people’s premises and making his own version with 300% more nude and violence. So just guess what he did here…

The first thing you will notice is that the main hero is a … girl. And not just a girl but a GODDAMN HALF-NAKED SEXBOMB WHO UNDRESSES EVERY HALF AN HOUR. Before one starts accusing me of how this is not original at all, he should first look at the year the anime was made. He will then realize that SUCH THINGS DIDN’T EXIST YET. Cutey Honey is historically the first anime babe, created solely for males to drool all over her. And if that is not enough please notice how she is A GIRL HERO IN AN ACTION SERIES, which again was unthinkable back then as action and robots automatically meant an almost all-male cast with a few girls in the background… which stands true for almost all shounen series even today. Yes, I know how we have Ikki Tousen, Queen’s Blade and lots of other brain dead action anime with busty chicks fighting each other. The thing is, Cutey Honey did all that 30 FREAKING YEARS PRIOR and no other series managed to be as successful or as famous as it is up until the early 2000’s and only because the newer generation had no idea of such an old show existing.

The similarities to other shows don’t even end here. No sir, I just mentioned the allusions to other scenarios and not to aesthetics. So once again, Cutey Honey uses henshin to transform to her battle form and fights with martial arts. Does that remind you of something I already mentioned before? Yup, it’s just like Gatchaman! , masked heroes transforming and fighting a criminal organization with martial arts. Another allusion is the minions of the villains, who are an endless army of identical masked gangsters with Tommy guns. One could again say how Gatchaman did the same and I can even add how their looks are a tribute to the ones in Tetsujin 28 (Nagai loved that show).

But again, one could reject all these details and just say that Cutey Honey simply ripped off elements from other anime and not even the ones I specifically mention. I mean all super sentai shows had endless identical goons and there already were dozens of other minor action shows with masked heroes fighting crime with henshin and martial arts. Well, once again I must remind you that we are talking about Go Nagai here, the dude blah, blah, more nude and violence, blah, blah. I ensure you that besides those similarities, this anime is also FAR MORE VIOLENT. Whereas in Gatchaman and in any other show the heroes would mostly try to incapacitate their opponents, Cutey Honey had no qualms of killing them while smiling at the camera. Plus, her Zorro-like sword finishing move was practically slicing its victims in pieces before they evaporate or just blow up. So ok, in reality all the bad guys in the show are robots and don’t exactly count as killed since they never were alive to begin with. But they look and act human enough to fool you of that detail and the specifics are hidden from the viewer for most of the show. Which is again another thing that makes the show great; most shows would rush to make clear from the pilot episode that the heroes are not killing humans but soulless robots. But Cutey Honey actually does the opposite! Oh Nagai, you little rascal…

And no, I haven’t even finished the comparisons. One who watches the anime would feel that the show is closer to a girly mahou shoujo genre than to the manly action shounen. I mean Honey loses her clothes while transforming, poses weird while her new uniform appears, changes hairstyle and does not hide her face under a mask, plus has her own catchphrase (I WILL CHANGE!) and even taunts the villains, most of which are women in a fashion that is … well … very Sailor Moon. So it is actually very ironic how most remember Sailor Moon to be the show that began the trend when in reality it was Cutey Honey, 20 years prior… which was also far more erotic, far more violent and actually aimed at boys rather than girls. See how ahead of its time this show is? It actually deconstructed the genre before even anyone knew what the genre was in the first place! Its elements seem to fit in the era AFTER Sailor Moon and be some sort of parody of it when in reality Sailor Moon is nothing but its watered down tribute. Head explodes…

Before I move on I must point out that Cutey Honey is NOT the first mahou shoujo show. That title belongs to Mahou Tsukai Sally made in 1968, another anime I didn’t bother to review because I never watched it and because it looks frakking boring and simplistic.

Another thing that I can say about the show is that even its characters are WAY TOO FAR OUT for their time. Imagine an ugly lesbian female teacher stalking and hitting on her and a male news reporter who keeps bumping on her in very private moments. Imagine how all underlings in the show besides the foot soldiers are women with weird animal themed bodies and very, very, very, MUSCULAR body types. Heck, most of them look like brute men with a female head, which is again a very original and cool aspect of the show. Another thing about them is their ulterior motives. Cutey doesn’t JUST want to take revenge or save the world. In fact, I could even say those are secondary to her having fun. Because she is a sexbomb who loves to party and run around in her motorcycle and play pranks on people just like any teenager in the peak of her life. And the villains, lol, they don’t even want to rule the world or resurrect some arch demon to the most part. They just want to … have money. I mean really, they see something shiny and expensive and they rush to steal it, as if it’s all driven by female vanity for jewels and furs. Isn’t that just awesome?

Yet another great part of the show are the actual battle scenes, which to the most part are very exciting. They have good choreography for their time and unlike the dried up battles in Devilman, which were mostly him flying and throwing energy beams at ugly demons, here Cutey Honey constantly needs to perform all sorts of acrobatics around the area she fights, use the terrain at her advantage and finish the enemies, which are hilarious looking muscular animal-themed women, with hand-to-hand brawling and swordsmanship. That’s right, she doesn’t vaporize them with rainbows coming out of magic staves, which is again awesome.

And YET ANOTHER FOR ONE MORE GODDAMN TIME is Cutey’s form or energy reserves. She constantly needs to eat a lot in order to fill her batteries and not plug herself to a some electric outlet. Also, as her power lowers, her clothes disappear and at her weakest form she is but naked! Nothing alike the “clothes-make-of-rice-paper” trope all fan service show have today.

And now some info about its remakes. There is a live action version which I haven’t watched to say anything and a 90’s version simply titled Cutey Honey F. The F in the title stands for FAKIN’ TERRIBLE and this version is to be shot in public, along with the ones who made it. If you want to see how this awesome show can turn to a mediocrity then go watch that piece of turd. They took out the nude, the death, the violence and made it into a far dumber and completely boring Sailor Moon imitator aimed for 5 year old girls. MAY IT BURN IN HELL!!!

Thankfully they figured out their mistake and made another version in the early 2000’s titled RE: Cutey Honey. NOW THAT’S WHAT I’M TALKING ABOUT! Although it doesn’t last too much and the story has the characters in different roles, the action and the feeling are left intact and combined with the brand new visuals of our time make that one a completely worthy tribute and remake. But you better watch some of the original first because it packs many in-jokes that prior knowledge is somewhat needed to fully appreciate it.

So yeah, I loved this oldie despite its lack of actual plot and monster of the week format. It was decades away from its time and I sometimes think if Nagai went to the future, saw how things are today, and went back to make it as it is.
Head explodes…

An absolute classic for any fans of magical girl anime!  Honey's adventures are sure to make you laugh, make you gasp, and keep you at the edge of your seat as you follow her in this classic series!  An absolute recommendation for all fans of the magical girl and action genres.