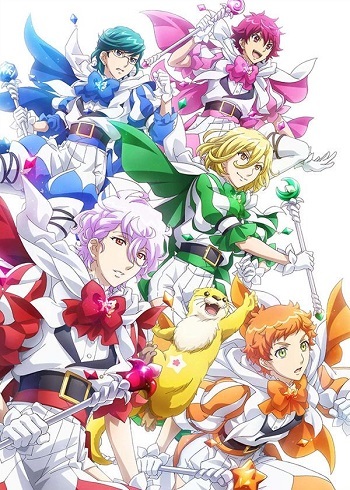 If you're looking for anime similar to Cute High Earth Defense Club Happy Kiss!, you might like these titles.

"Love makes a girl stronger." Saki Uno is working hard as part of the new idol unit, Magical Twin. The one she admires most is Mohiro Mikage, who’s the older brother of her idol unit partner Sakuyo, and he’s also a member of the top idol unit STAR☆PRINCE. She would be willing to do anything for him, and one day, those feelings brought on a miracle. Saki ended up turning into a magical girl when she strongly wished to protect someone... But what she turned into wasn’t exactly what she was expecting...

Minki Momo is a teenage magical princess from Fenarinarsa, the mysterious land of the dreams in the sky – a place where all fairy creatures live; but because humans have less and less place in their lives for dreams, Fenarinarsa is bound to disappear. In order to prevent that from happening, The King and Queen send their daughter to Earth where she is to live with foster parents and give back hope and imagination to the people. With the help of Sindbook the dog, Mocha the monkey, and other friends, Momo will use her ability to turn into an adult and her charisma to win over humanity and restore its faith in dreams!

Komugi is back! Now in a competitive idol career, she’s finally making a name for herself. Unfortunately, this usually results from her rivalry with the equally fame-hungry Megumi, with fans lapping up the action as the two swimsuit-clad beauties battle onscreen. However, Komugi’s warring lifestyle is disrupted with the arrival of the dastardly Magical Maid Koyori who seems intent on spreading weird viruses throughout the city that change the citizens into comical internet characters! One magical transformation later and Nurse Witch Komugi is ready to do battle with this cat-eared troublemaker. Can Komugi defeat Koyori and once again banish Angrar, the king of viruses, back to Vaccine World?