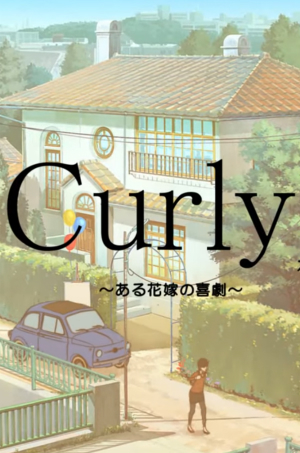 Curly is a one-episode web short directed by Tetsuro Kodama, who previously provided CG direction for the first Mardock Scramble movie and also directed a number of fairly obscure shorts and children's series. Besides, he is the representative director of studio Echoes - a rather unknown Tokyo-based studio specializing in CGI animation that was established in October 2012 and so far has only made a number of short anime (including this one) and provided CG work for the recent gangster series 91 days.

So, what is Curly actually about? According to the opening credits in the movie, the story takes place in Kyoto, Japan (although there is no real way to tell whether it's Kyoto or not). A young bride has two mishaps just before the wedding ceremony and naturally starts panicking because the ceremony is about to commence, and she is absolutely not ready for it. The anime shows the interactions among her, her parents, her younger sister and her pet (who is some big fantasy creature of unknown origin wearing an orange scarf), and how they deal with the situation.

Now, a quick rundown through each section of the review:
- the character animation is entirely computer generated, which is not something I would normally like as I prefer hand-drawn animation over computer generated one because the latter often makes characters look awkward and robotic. However, the CGI here is not bad compared to many other shows I've watched. In fact, the animators even managed to make the characters move in a fairly lively way, which is very important because the show has absolutely no dialogues, and thus gestures and facial expressions are the only way the characters can express themselves. As for background art and art in general, I guess it looks alright;
- the soundtrack is instrumental music employing keyboards. It is not memorable yet sounds nice, creating a proper mood for the show;
- the story is very simple but dynamic, with a nice premise and a conclusive ending;
- as for the characters, they are also not outstanding or particularly memorable for any reason yet they feel lively and believable, acting like normal humans would, and thus they are fine for this kind of show.

While the following statement may be rather subjective, I think the biggest drawback this anime has is that it's not that funny for a comedy, which is one of the main reasons why my overall rating is not very high.
On the other hand, while the show does not manage to be outright hilarious, it does manage to be mildly amusing and pretty cute, which is especially good if you like romance and family-related anime.
So, if you want some quick watch, or you are generally interested in obscure anime, this short may turn out to be a fine way to spend 4 minutes of your time.