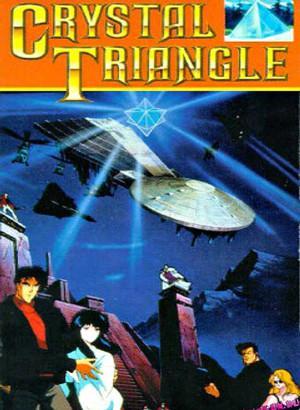 I've seen bad anime. Baoh and Psychic Wars come to mind as one shot viewings that were so incredibly bad, but were so hilarious at the same time. Think of it like MST3K, but funnier. Ahh, I have fond memories of those two. On the other hand, there are piles of steaming shit such as Wild Cardz and Angelique. Deformed and mutated bastard children such as these have a permanent place on my worst-anime-ever list, and rarely does a new one grace that list's presence.

From the depths of hell and good taste, I bring you Crystal Triangle, an anime that proves that even anime creators can be as brainless as a sorority girl on rohypnol for her third frat party in a row.

The story starts out innocently enough, with an Indiana Jones lookalike fellow scouring ruins for various things, though he runs across a cube (reminiscent of hellraiser, I seriously thought the spikes were going to jab out at him) that may be the key to finding God's hidden message! This message is supposedly the key to saving humanity, but is it also the key to making this anime suck a little less? I THINK NOT! See, there's a message hidden in the name "Crystal Triangle" just like there's a message hidden in God's plan... the secret message is... are you ready? ...."OH MY GOD I SUCK ASS".

After finding the cube, the story just goes downhill as everyone wants it. Crystal Triangle is also full of abbreviations. The KGB are involved, as are the CIA, as well as the PSMFIN (Please Smash My Face In Now). There's also a samurai, lots of helicopters, disproportionate monks that spit fire, green teeth and eyeball monsters that come out of nowhere, some sort of flying spacecraft, explosions, and my vomit all over the floor after I saw the ending. All in all, it makes for a fantastic storyline that is deep, thought provoking, and full of great joy and excitement. Oh, sorry... I was talking about how I felt once I hit "stop".

I've had more inspiration cleaning out my cat's catbox, quite frankly.

Visually, Crystal Triangle has some of the most hilarious character designs I've ever seen, period. First of all, the monks look like they are trying to imitate trees with gnarled pointy noses and freakish eyes. They also spit fire and float around mumbling. Wow. Some of the monks appear to have been born in a square birth canal, as their bodies are completely square and their heads are COMPLETELY disproportionate. Then there's the green monsters (who don't really make a lot of sense anyways), who have tons of teeth and eyestalks with googly eyes. Wow. Then there's the normal characters who look utterly generic and boring, with simple lines and jerky animation. Wow.

How about the cheesy as hell explosions? Or the dreary colors? But hey, who am I to complain about the animation if I don't have a suggestion, right? I suggest the artists knock over a bottle of ink onto the screen, remove all voice acting and call the anime "Night -- a series of shots in the dark".

There wasn't a great deal of music in Crystal Triangle, but when there was, it was synthy and occasionally orchestral. Not terrible by any means but definitely not great, hence the average score. The voice acting was fine but very cheesy at the same time.

There were definitely a plethora of characters, all of whom were about as interesting as the piece of lint on my floor. There's the professor, a womanizing ruin-crawler who wants to find God's message (and bed his assistant), but he's fairly flat and boring besides that. His cohorts are useless except to help him find things, have little to no personalities and their relationships with him mean nothing to us. Then there are the strange monks who are laughable and ridiculous, the weird monsters, and the CIA and KGB agents that are pointless. I cared zero about anyone in the anime, cared zero for their relationships, cared zero for the deaths and zero for anything except how soon I could turn this off.

Overall, Crystal Triangle was one of the best series I've seen, and easily makes it on my top 10 list. JUST KIDDING! I can't recommend this to anyone, not even those of you who like Angelique. There's nothing redeeming about this... NOTHING! I never give less than a 1 but It's definitely a low 1. The only scenario I can recommend Crystal Triangle for is if you have kidnapped someone (revenge, of course, since they ripped you off in a coke deal gone bad), tied them up, and forced them to watch nothing but anime of your choice. In this case, Crystal Triangle would probably be the top of my list. Otherwise, this isn't even so bad that it's funny... it's just... bad.