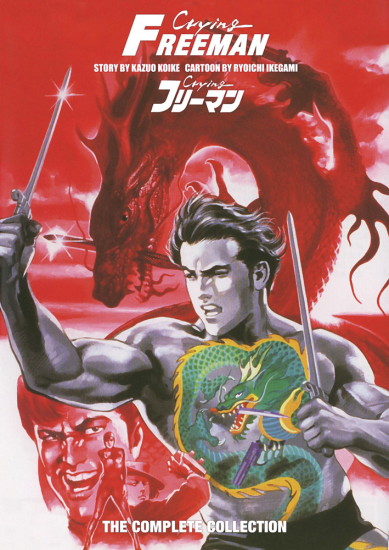 Crying Freeman is the adaptation of a renowned graphic novel manga. Unlike 99.99% of anime, it hardly censored the gruesome violence and the extreme sex scenes in it. It even has a never before seen again trait in battles: The characters strip butt naked in order to have complete freedom in movement! For them, armors are just a hindrance if you can outrun bullets.

STORY & CHARACTER SECTION: 5/10 [An interesting looking box with nothing inside.]
A Japanese artist is trained by force by the Chinese mafia to become Crying Freeman, the world’s deadliest assassin. He is sent to avenge the damage other organizations have done to his trainers and falls in love with a woman on the way.

Oh, yes, another series with an ultra-powerful heavy-dude, bound on revenge. Got my share of those; no more, thank you. At least, this heavy-dude has a feint trait that sets him apart from all those billions of counterparts. He cries every time he kills! And he is not an emotionless killer, as he never kills those he judges as innocent. Beyond this trait, he is as stale and shallow as a dried up bog.

Surprisingly, the character with the most character development and interest is the woman he loves. Not only she is a sex-bomb (and if you like glass fetishes, an ultra sex-bomb!) but also she passes through several changes in personality and fighting capabilities (won’t say more for fear of spoiling it). I almost believe she should be the real protagonist. Or maybe she represents the training and evolution Freeman also experienced in the past that we never got to watch… Oh, well, whatever the reason, she is by far the most interesting character, even if she doesn’t get the screen time she deserves.

All the rest of the characters are there for flavor. They are either stereotypical villains that die in the same episode or misjudged criminals that Freeman befriends. They all look and act different but are otherwise as real as carton boxes.

The story is only 6 episodes long but it constantly changes themes, villains and locations, thus it hardly gets repeating or boring. The plot is always about protecting or killing someone but you hardly think about it as you watch.

In general, it is a very cliché story with stereotypical characters. But the unique traits of the two main characters and their graphic-novel-like presence in it (read below for more) give them some credit.

ART SECTION: 8/10 [Everything looks so real!]
I couldn’t believe that such realism was possible back in the time the series was made. But it turns out it was. To get a picture, it puts Fist Of The North Star (a much similar-themed series) to shame. Some stale images and lack of realism in battle choreographies ruin a perfect score but for the most part it’s awesome!

Also, there is an awful amount of sex and violence in it that makes even Elfen Lied to appear silly (no kidding!). You are literally absorbed by either the really cool animal tattoos, worked out male body figures, really slim and sexy female figures, boner-invoking nude and sex scenes (genitalia are invisible because of the law restrictions back then) or the Hong Kong movie-reminiscent battle scenes. There are even detailed facial expressions and lip sync present here but that turned out to be a problem (read below why).

SOUND SECTION: 5/10 [Oh, my ears hurt!]
The music themes were boring and most voices were either fake or flat. It’s a real shame to see so well made detailed facial expressions and lip-sync to be wasted because of such amateur voice actors.

VALUE & ENJOYMENT SECTION: 5/10 [Sex and violence always sell.]
The several action and sex scenes are a major attraction. This is boosted further by animation of graphic novel proportions. But it drops down again by the lack of realism (Freeman outruns even a volley of bullets), plot twists (Freeman is clearly the winner from the start) and the overused seduction theme (there isn’t a female character that Freeman didn’t kill and didn’t had sex with).

VERDICT: 5.5 / 10
The accused is found … GUILTY! … For thinking good looks alone can make you successful.