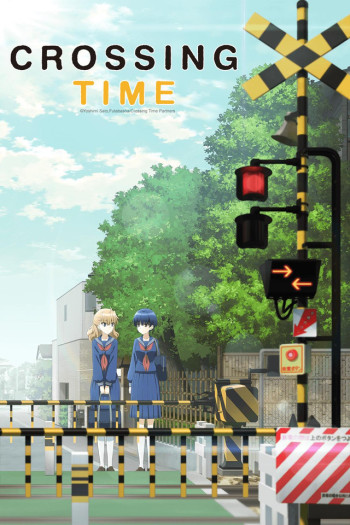 I found this show on A-P's homepage in the watch online widget/section and decided to give it a shot. With a total runtime of less than 40 minutes, it's surprising the amount of joy it gives.

The story is episodic so if you're looking for something long, you'll be disappointed. However, past that point, Crossing Time is really fun if you're just looking to kill some time. The whole show is pretty "flat" and each story/episode is satisfying despite that.
Some characters were very cliche and some were not so cliche. But they all work quite well in the big picture that is the whole show. There was only one character that I found annoying. Though I guess he was supposed to get on your nerves haha. My favourite pair in the show was Ai-senpai and Tomo. The character designs and animation were decent. The voice acting was on the spot.
There's nothing to be said about the sound since there is no sound at all aside from environmet and dialogue.

It's honestly unusual to see such a good show rated so low on here. I'm guessing it's because majority of people who rated it had watched it when it aired weekly. I think this show is ideal for binging more so than having to wait a whole week for just 3 and a half minutes of content. Also, if you're one of the people who watch a lot of stuff at the same time, most of which is packed with "happening" story arcs, Crossing Time is a good out-of-the-ordinary break from the buzz. This could also be the main reason why I'm so in favour of it. But I liked it nonetheless.

Studio Ekachi Epilka brought this delightful slice-of-life Japanese manga series, by Yoshimi Sato, to our screens in 2018. Each episode is only 4 minutes long and you wish they would be longer. There is no overall story arc nor is there a set cast of characters. Each four-minute episode is a self-contained snap-shot. The only thing they have in common is that they happen within the time the characters are waiting for a train to pass. This mainly involves young people of school age in a set of short stories that embrace humour and a little romance. Everyone will have their own favourites. Ours included the opening episode “Their Youth” with the two school girls. One tempts the other to scream out the name of the person she loves as the train passes. She does so but it was a trick. Her friend shouted nothing. However, she did hear her friend confess her love for her. Then there is the older boy and younger sister who communicate with text messages despite the fact they are standing next to each other. The boy knows his sister has a bit of a brother-complex but won’t admit to it. He teases her to comic effect. Other tales show a teacher who finds it hard to communicate with one of his students, another features a middle-aged man reminiscing about a pretty girl he used to see at the same crossing point some twenty-plus years earlier, only for her to seemingly reappear in front of his eyes. Each tale is a heart-warming slice of the human condition that can only serve to raise a smile. Sadly, the whole of season one was over all too soon. This show was an utter gem. A beautiful example of just what can be achieved within the narrow confines of a story format of just a few minutes. Someday all anime will be made this way. Maybe. A delight.

This anime was entertaining to watch, it is Orion all in content; good animation and sound; the graphics are high quality and resembles various parts of JP. It's diverse in stories, people and content which is awesome! I also enjoyed the short duration of the episodes so you can easily binge them in a few hours or days if you want to stretch it out!