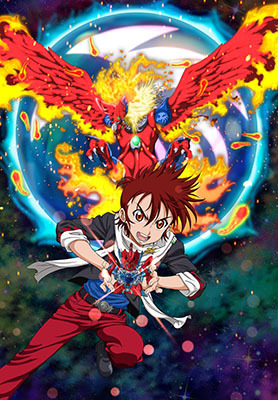 After the defeat of the Shadow Alliance, Yamato is in search of special B-Da Balls called Strike Shots, which originated from shooting stars. After a fight with the mysterious Haja and he obtained his Strike Shot, the Drive Shot, Yamato then met Gunnos, a rookie B-DaPlayer and got his own Strike Shot to participate in the Winners Tournament along with Yamato's old friends and rivals. But little they know that a terrible evil is about to put the B-Da World in peril once more.

While children such as Ash collect Pokemon and battle it out with fellow trainers, others, like Ben, are Pokemon Rangers. These special people must keep Pokemon safe from the likes of Pokemon Nappers – thieves that poach and sell the creatures for profit. As a Pokemon Ranger, Ben will go toe to toe with the evil Red Eyes, save Latios and even Raikou, and become friends with a special ukulele-playing Pichu.

BROTHERHOOD delves into the extraordinary friendships between Crown Prince Noctis and his three comrades, setting the stage for the adventure players will set out upon in the action-packed RPG.

One night, the legendary mustached plumber Mario is playing a video game when suddenly, the in-game character Princess Peach emerges from his TV set! Then, in the midst of the confusion, another invader from the game world follows: the evil Bowser, who quickly steals Peach away and returns from whence he came. After a series of events Mario and Luigi soon find their way to the Mushroom Kingdom for the adventure of a lifetime. With Hammer Bros and Piranha Plants around every corner, the duo must now find the Princess before Bowser takes her as his bride – and to do so they first must find three legendary items: the Mushroom of Strength, the Flower of Courage, and the Star of Invincibility.

The story is based on three fairy tales, the first being Ogre's Treasures, the second one is Mario and the giant Peach, and third being Snow White.