Crest of the Stars - Reviews 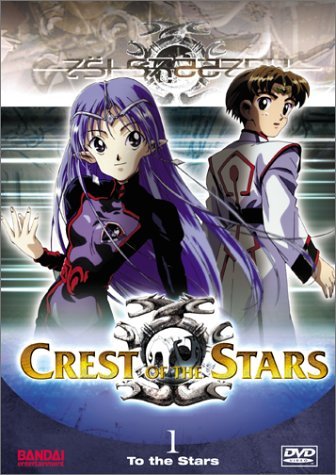 At its heart, Crest of the Stars is about the bond that develops between the two main characters: Jinto, a human, and Lafiel, an Abh princess -- both who are adolescents at the start of the series. Their interaction begins casually: Lafiel is assigned to pick up Jinto, because it's time for him to go to space academy as a stepping-stone to his life as an Abh nobleman. Being totally unaware of Lafiel's heritage, Jinto talks in the somewhat awkward way that any adolescent boy talks to a girl he thinks is sort of cute. Needless to say Lafiel rather enjoys being talked to as a normal person for once, and thus, the bonding between the characters begins. Jinto and Lafiel's bond is then further cemented through overcoming a series of tribulations that force them to rely on each other for their very survival.

On the surface, this may all seem like a somewhat unoriginal anime, but the real genius in the series is how the trials unfold and force the characters to grow as individuals and as a team. It's a subtle thing really, but in the end you realize that you're not watching some sort of kids-in-space classic; rather, Crest of the Stars presents a very unique take on the typical boy-meets-girl saga, showing you violence and death through the eyes of children who are caught in the middle of burgeoning intergalactic war. The story and the unique point of view from which it's told make it a truly worthwhile series and a real must watch for true anime fans.

Anyone who watches this series has to watch it with the understanding that it is an older anime, originally released in 1999; thus, Crest of the Stars does not have any CGI goodness or sharp crisp colors that are prevalent in newer pieces. In fact, if you watch closely enough they do re-use some battle sequences which was a commonly used cost-saving practice in the pre-CGI era. Beyond those minor nits I can't help but think that the anime was intentionally drawn with a bit of a retro-look. The uniforms closely resemble something you would see in an early 80's Star Trek movie and the ship and weaponry are very round and simple, almost Star Blazer-esq. That said, the animation does nothing to detract from the story itself, but for the hard-core anime fans it is obviously a bit dated; though in retrospect I'm not sure that wasn't by design.

Just like the animation, the sound is a bit dated. That said, the soundtrack does a couple of very key things. One, it instantly identifies the story as a space odyssey with an orchestra based opening that reminds me a lot of something out of 2001 or other early 80's space movies where the theme was more exploration rather than conquest. Two, the producers open every episode with a narrative not in Japanese, but in Abh which really sets the tone of the piece by immediately demonstrating that this work isn't about earth-bound humans. Aside from these two key contributions the real in-series soundtrack definitely compliments the story, but unlike other series this soundtrack doesn't carry the series or really stand out in anyway.

Characters and character development are why you watch Crest of the Stars, as the bond that forms between Jinto and Lafiel is truly admirable. I think many people will come away from watching Crest of the Stars wishing that they had a "friend" who felt the same way about them as Jinto and Lafiel felt for each other. That said, the one thing that I find truly redeeming about this anime is that despite the horrific backdrop and the potential loss of innocence that you would expect, Crest of the Stars actually takes a surprising turn where the characters turn inwards and find the hope and strength to go on. This turn serves to focus the viewer on the characters and their relationship instead of the space odyssey itself.

Truthfully, as an anime fan I'm much more interested in good story telling than flashy animation or high production value. Moreover, I tend to give high marks to stories that do a good job of getting me to identify and sympathize with the characters. As a result, I give Crest of the Stars great overall marks despite being a somewhat dated production because it got me to buy into the characters and story from the start. As a result, I give Crest of the Stars an 8.5 as it's a great story. At its heart, Crest of the Stars is a well-told boy-meets-girl saga; and while boy-meets-girl sagas may be totally over-done in the world of anime, this one's worth watching.

NOTICE: Consider this text an overview of the entire franchise.

When Legend of the Galactic Heroes ended in the late 90s, everybody was looking forward to another space opera that would take itself somewhat seriously and rival the aforementioned title as the best in the genre. Crest of the Stars came out soon afterwards and for awhile it was a fine replacement. Many were even praising it for doing a lot of things better than LOGH. The art is of course dated by now and the animation is stiff, yet most of the background art is great. There are not many episodes with action or fighting, but those which have them, do their job just fine. The opening theme is amazing and really helps to immerse you in the series.

The thing is, for a space opera, Crest of the Stars has more soap than space. It’s closer to a coming of age with some tragic romance mixed in, while a galactic war is at large in the background. To its credit, it does a pretty good job at making the characters likable by spending a lot of time in their everyday lives. The downside is, it hardly has any tension or closure. Despite including a few pretty well made battle scenes, as a whole, the alien side is simply more powerful than the human side. You are just waiting to see when they are going to take over the galaxy with nothing standing in their way. Warfare ends up not being a vital part of the storyline.

The kiddy romance between a human boy and an alien girl ends up being more prevalent. Their social status keeps them apart as she is an imperial princess and he is a commoner. Also, they age very differently, so it’s tragic to imagine one dying of old age while the other one is still young.

Other than that, there is a serious lack of counterforce to the presence of the Abh aliens, who can be described as biologically enhanced space Elves with a cat fetish. Their side is the only one you end up caring for, since the plot is constantly trying to present them as tragic figures. The human boy becomes a forgettable archetype next to the Abh who wish to bring order to their chaotic galaxy by conquering every sentient life form. They are not evil, they have a noble cause, they are victimized by technology, and on top of everything else they are boy scouts before the shithead humans who are constantly fighting amongst them. They are ridiculously idealized and overpowered to the point of becoming Gary Stus. There is close to no erotic fan service in the series, and yet they are still presented like ideal waifus and husbandos.

Still, they are still far more fleshed out and treated with far more respect than most anime characters out there. They are not ridiculed or oversexualized for the sake of selling more copies, it’s not about loli tsunderes and their beta male punching bags in some high school. This alone is what makes it worthwhile if you are not bothered by the lack of an interesting plot and a solid ending. 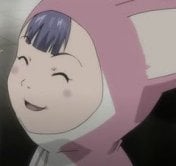 To be honest, I have never expected this kind of recomendation from my Santa. I've never heard of Crest of Stars before, so I must praise my Santa for makin an effort and picking something like that.

Crest of Stars is your clasic space opera - some foreign, alien race invading your home planet, lots of spaceships ang space battles, wierd languages. I was impressed with made-up language the Abh were using. I mean, there were even japanese subtitles to translate the  history of Mankind. I'm not content with charaterisation. Even with only 13 episodes, we barley know something about the main characters, their background and why are they acting the way they are. And other characters are just passing through. This is a story about two kids who face the hardships of war, invasion, being treated with hate and distrust, lost and unsure were they belong anymore. I guess the animation is like all end-of-the-century anime, feels a bit blurry at times, and blue colour is often used.

The anime in a whole reminded me a lot of Voyager (Star Treck Voyager).  Following the adventures of one starship (or, in this case, the daughter of the geneticaly-altered-human emperor and a human boy who was unwillingly on a path to became one of Abh royality).

For those who prefer reading over watching there are 3 Crest of Stars light novels I recomend reading.

Creat of the Stars, and its corresponding animes, are anime classics. It is a good watch. It is reminiscent an older generation. The story is neat and the plot moves along slowly at a continuous pace. A neat idea was that an alien race may not have the same emotional response to a situation. Different logical standards. The characters are more inclined toward the norms of their upbringing, then their individuality. As this is an older anime, therefore the animation and sound are not comparable to modern standards. Grab a classic martini and enjoy.

Originally posted on the forums on April 15th 2008

I've recently received my Crest of the Stars dvds, so today I decided to watch the episodes I had on "hold" for a while. Wow... usually I really (and I mean REALLY) dislike space operas, but there's something special about this series... I can't quite put my finger on it, but I literally fell in love with it!

It's definitely not the artwork, to be honest it plain sucks! Lafiel is actually supposed to be gorgeous looking, right? Well, visually it doesn't seem like she is that much of a babe to be honest. :/

BE WARNED, the very first episode was soporific. Not only that, it's also confusing as hell and not pretty to watch, but every single episode after that was just sublime.

I guess it's the storytelling and the characters themselves who made me like this show so much. That, and a stellar performance by Lafiel's seiyuu, Ayako KAWASUMI.

Now I need to find the rest of the series for a decent price somewhere. I loved it so much, it just wouldn't feel right to watch fansubs >.