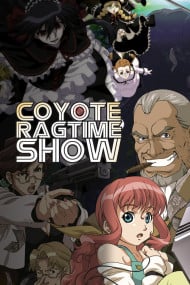 Androids and treasure and pirates, oh my! When the space pirate (aka “Coyote”) Bruce was killed, he left behind a legacy of the greatest heist ever known, and only one person knows how to find it. His daughter just wants her inheritance; the Coyote Mister just wants his cut; a detective wants to finally capture the bad guy; and the nefarious Madame Marciano and her android assault force are just out for blood. Can Bruce’s treasure be found, or will the authorities and bounty hunters steal the show?

Get ready for a wild space pirate ride filled with killer android lolis and a likeable group of space pirates also known as Coyotes! While not being the most profound anime out there Coyote Ragtime Show is what a it is- an exciting space adventure with an amusing cast of characters. It had a bit of a Treasure Island feel to it. Story: 5.5 Nefarious criminal known best as "Mister" has broken out of prison and is now in a race against time, (and a group of android assassins) to reach a treasure left behind by his late friend the king of pirates. The story behind this anime is quite simplistic and straightforward. A race to reach a treasure from planet "Graceland" before it's scheduled to blow up. There's also the kid/ guardian forming a bond story between the main protagonist "Mister" and the young orphan girl. There are a couple of times when flashbacks try to add some depth to some of the characters backgrounds, but they really don't add too much and fail to clarify much of anything. Animation: 7 The animation in this show is fun to watch, though nothing spectacular. Mister and his crew are being chased by 12 lolita assassins throughout the anime and this leads to plenty of gun fights and space battles. While being fun to watch there's nothing in this anime that really stands out compared to other anime in this genre. Sound:  6.5 This anime had a decent opening and a lot of good voice actors. There was also a lot of cool sounds effects from guns and explosions, as well as space ship battles. All in all, not bad. Characters: 6.5 The characters in this anime are fun to look at and several have fun and interesting personalities, but they all seemed to lack depth. The lolita assassins were all androids so I guess we can't really expect much of a personality from them, though they did have their own quirks that were sometimes amusing. The relationship between Mister and the orphan Franca is the most depth you'll get from this show, but it's really just Franca deciding whether or not she can trust Mister. Mister's crew features some fun and amusing characters in Bishop, Katana and the former criminal turned pastor Swamp Gordon. The verbal fights between Bishop and Swamp can be funny at times. The federal agent Angelica and her partner Chelsea really don't add much to the show in my opinion, other than adding another party to the list of people chasing Mister for their own reasons that not even Angelica is sure about. Overall: 6.5 Ok, despite not having much depth to this show it's still fun to watch, doing a decent job of mixing pirate criminals with space adventure. Don't expect to take much from this anime other than a fun space heist where the heros never die and you'll probably have fun watching it. No guarantees on this one though as it's not the best show out there so I'd only recommend it if you looking for something amusing to kill some time with.

An early work by ufotable that really wants to be 'Cowboy Bebop'. It does't have the strength of character writing or depth of story to pull that off, but it still makes for a fun romp if you don't take it too seriously. STORY About as straightforward as it gets. There's a huge treasure on a planet scheduled to be bombed to dust, and our crew of misfits has to evade the police, military, and the most powerful mafia in the galaxy if they want to grab it before everything goes ka-boom. The plot runs on well-used tropes and a strong dose of suspension of disbelief. You'll be left wondering why the antagonists can routinely crush far larger criminal and military forces without breaking a sweat, but can never win a fight with one rundown spaceship (it seems Mister had his ship covered in top-quality plot armor...) and coincidences abound. It's a popcorn material plot if there ever was one, but thankfully the story doesn't take itself seriously enough for you to really be upset. Also, bonus points for coming to a conclusive ending. ANIMATION The strongest suite of the show. ufotable usually excels at lighting and color and here is no exception. 'Coyote' is great to look at, fluid, and each important character is very visually distinct. Interestingly, the ending sequence is done in stop-motion like one of those old Christmas specials- it's hardly jaw-dropping but at least it's unique. CG is pretty good for a 2006 anime, so I have no complaints there.SOUND The show is drenched in American archetypes, so the English Dub is definitely the way to go here. There's one particular scene in the show where a fight breaks out and ragtime music starts playing- a moment that practically screams "I"M TRYING TO BE COWBOY BEBOP!!!" Overall, the sound is fine, but nothing truly amazing. CHARACTERS Sorry, but these Coyotes have nothing on our favorite Cowboys. The fairly weak characters keep CRS from being anything more than a fun caper series. On the good guy's side Bishop and Swamp have some decent comedic interactions, but Mister, Katana, and Franca are by-the-book archetypes with Katana being a particularly bland 'tech savvy Japanese guy'. Angelica Burns isn't bad (part of me is just happy to see a grown woman in anime for a change), but her assistant Chelsea is practically useless, only on-screen so Angelica has a reason to explain her plans and logic out loud for the benefit of the audience. The villains don't have any stronger writing. Madame Marciano will sometimes talk about 'living an honorable life' or 'representing the true spirit of the Criminal Guild' but those statements never seem to tie together or have any connection to the events unfolding. The 12 Sisters are fairly bland and lacking in personality, their entire motivation can be summed up as "Mother says go kill Mister, let's do it!" At least there's a bit of novelty to psycho Gothic android-maid-assassins. OVERALL Don't take this one too seriously and have fun watching the pretty colors. 'Coyote Ragtime Show' never brings anything to the table to make it truly memorable, but it's worth a watch (and definitely something you should consider checking out if you're sick of every modern anime taking place in a Japanese high school).

When I was looking for a series to watch, I came across Coyote Ragtime Show. All of the promotional material showed something that hearkened back to classic sci-fi action adventure series such as Trigun, Cowboy Bebop, and Outlaw Star, and a lot of people who had seen it seemed to be making the same comparisons. With all that going for it, this series definitely drew in my interest. Our story starts in the future, there are space outlaws called Coyotes who commit crimes but share a strong bond of friendship that a true Coyote wouldn’t betray. One of the most infamous Coyotes is Mister, who goes by many different aliases. Detective Angelica Burns has spent the last four years trying to track him down. She finally received an anonymous tip that Mister was at a prison and the desert planet of Sandvil. A loyal but clumsy assistant named Chelsea meets her on the planet to help her. Right as Angelica and Chelsea arrives at the prison Mister is located at, Mister breaks out only 10 days from released with the help of his old partners Bishop and Katana. As he is escaping, an elite squad of android assassins show up sent by Madame Marciano to take out Mister. As Mister escapes, he seeks out Franca, the daughter of his best friend Pirate King “Blue” Bruce, as they seek out the treasure Blue left for Franca to inherit on a planet called Graceland, which is in a civil war and faces immanent destruction from the Milky Way Federation in a week. Soon, the group of Coyote’s are chased by the Twelve Sisters who want to take out Mister and capture Franca along with Detective Angelica and her assistant, as she wants to take Mister into custody, as the time is running out to get the treasure. With those comparisons and a plot like that, this series is setting some fairly high standards for itself, but is it anywhere as good as those series? Unfortunately, the series never reaches the heights of the influences that it’s taking from. But that’s not to say this series is bad by any stretch, and there is a lot to enjoy here. The series comes with a large colorful cast of characters with varied and interesting designs, and while not all of them get a fleshed out backstory, they all get enough of a time in the spotlight, all being memorable in their own ways and it’s really easy to tell them all apart. And sure, there is a lull somewhere in the middle, but I imagine the series as a whole would be worse off if it tried to keep the action amped up to 11 the whole time. Aesthetically, the series goes for a very rustic lived in world for it’s sci-fi settin, which helps this series to stand out from other stuff coming out around the same time. And I kinda wish more series used a rustic sci-fi setting, just in general. It feels like a highly underused setting. While there isn’t too much to say about this series, it does stand on it’s own and a good time. Coyote Ragtime Show might not come close to being a classic like the shows that it’s been compared to, but much like those series, it’s not going for high class or arthouse, simply trying to be a fun space adventure, and with those intentions, it does succeed, and is worth watching for those looking to find something like the classics, even if itself is not a classic. Also, it’s OP is pretty catchy. </div> </div> 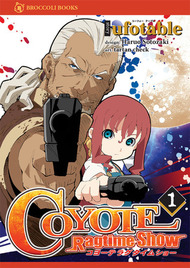