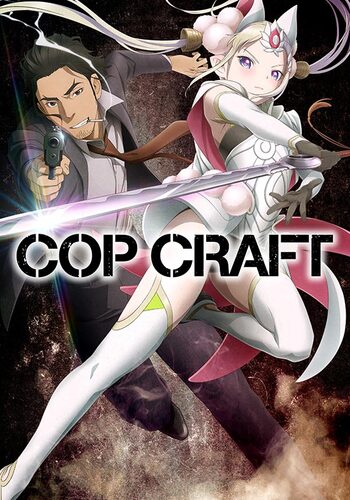 If you like Cop Craft or Special 7: Special Crime Investigation Unit, you'll like the other. Both involve cops solving cases and unique abilities.

Both of them are very similar with group of police is the mix of humans and otherworldly creatures working together with bizarre cases involving magic and occults. Both of them also have great action fight scenes that is very exhilarating.

Both are action flicks that follow a 2-person team comprised of a tough cynical guy + a plucky outspoken girl (who isn't human) fighting a menace from a different world/dimension. The male characters similarly start with hating their (nonhuman) partners' guts but then end up developing a sense of respect for them.

action packed shows about a guy and a girl fighting otherwordly enemies.

Both shows involve a blend of fantasy with law and order. Both are also highly stylized and have some great character interactions. Cop Craft is definitely the grittier of the two (so far anyway) while BBB takes a more comedic and episodic approach.

The Opening theme had so many Cowboy Bebop Vibes as I was watching it. If you like a Cowboy Bebop then Cop Craft might be as interesting

Both series take the buddy cop motif to a different level. Cop Craft is the more gritty and raunchier series than Double Decker, but they both deal with a makeshift cop team that fight against crime and corruption. Cop Craft feature the uneasy partnership of a no-nonsense cop with an alien girl, while Double Decker pairs up a promising rookie with a cop that plays by his own rules.

If you liked Cop Craft or Carole & Tuesday, you'll like the other because they both share political elements about aliens. In both animes, they talk about aliens and deal with elections with candidates that do or don't support the aliens.

It is the year 2029, and as many rush to embrace the changes that cybernetic technology bring to mankind, the seedier side of humanity is even quicker to take advantage of it. This series follows Public Peace Section 9, a government organization that plays behind the scenes to stop the worst of these criminals. Join Major Motoko Kusanagi and her team as they take you through an incredibly vivid world filled with plots of such depth and intrigue as is seldom seen.

Waver Velvet – The boy who fought side by side with the King of Conquerors - Iskandar - during the Fourth Holy Grail War in Fate/Zero. Time has passed, and the mature Waver has now adopted the name of Lord El-Melloi. As Lord El-Melloi II, he challenges numerous magical and mystical cases in the Clock Tower, the mecca of all mages...

If you liked Case Files or Cop Craft, you'll like the other as they both handle detectives solving cases.

If you like Psycho-Pass 3 or Cop Craft, you will like the other as both involve policemen that solve cases with their immigrant partner. The show's world's are heavily influenced by immigrant police's.

In a world where humans and human-animal chimeras live together, half-human criminals leave non-human clues that have the police stumped. Enter the "lone wolf" detective Hiroshi Inaba, who has the ability to extract information just by examining (or tasting) someone’s hair! While his methods are unorthodox, he's up against a half goat crime boss with an appetite for green legal tender. Can sheer dogged detective work put the baaaaad guys behind bars?

Both of these shows have detective aspects to them. Both have supernatural aspects. One of the main pair is human and the other is a supernatural of some sort. Both have some dark humor and themes.  Both have some really funny and perplexing moments where you have no idea how that came to be. Overall they have some points that are similar but also have their differences. You might as well give them a try!