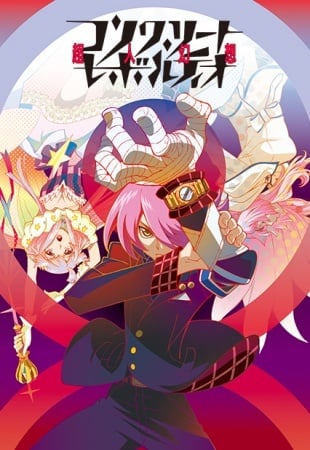 Some comic-book style, with great action scenes, fast paced, and lots of fun. While also providing some fascinating themes. Though ConRevo's themes are more political and a social commentary, while Kekkai Sensen is more about Leonardo gaining confidence in his own abilities, as well as the family bond between Libra.

Both share a distinct, stylized atmosphere that is subtly comic-book-inspired. If you are interested in interesting powers and how that affects the general population and story you will be interested in both.

Both shows have a slightly cynical, but fresh, view on superhumans and superheroes. While Tiger & Bunny pays more attention to the moral of heroes in a capitalistic society, Concrete Revolutio looks at the morals of superhumans in an oppressive society and how they should fight for (super-)human rights. Both try to give an insight into moral topics about people that are different.

After THE REFLECTION, some of the people in all parts of the world are discovered with super powers. Some become heroes, and others villains. How did The Reflection happen? What was the cause of it? With many unsolved mysteries, the world is lead into turmoil.

Meet the super-powered students of U.A. High School, their teachers, and the evil villains who are determined to bring them down!

In the city of Stern Bild, superpowered heroes known as NEXT fight crime while promoting their corporate sponsors for the hit show HERO TV. Veteran hero Wild Tiger has years of experience fighting crime, but when his ratings slip he’s forced to team up with Barnaby Brooks Jr., a rookie hero with an attitude.

Lately, the stress of having to constantly keep his destructive power under control is causing the Red King Mikoto Suoh to become unstable. Meanwhile, Reisi Munakata is chosen by the Dresden Slate to become the new Blue King.