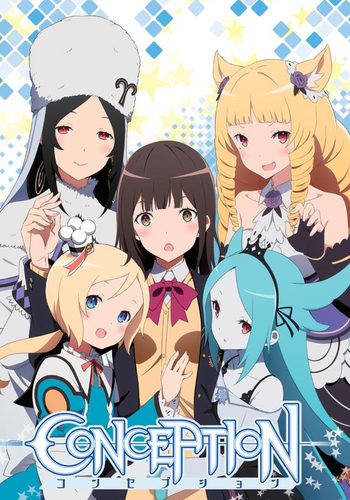 While watching this I thought after the first episode it would be a decent series but as I kept watching it made me feel disgusting. Usually i like open minded ideas and polygamy doesn't bother me, but after going through the series and watching the last few seconds (as well as the last few "will you have my child" sex scenes) I felt disgusting and like I had wasted my time. The story is trash and super predictable.

You know, it isn't that bad. I do see where people could turn off, but the people who dislike it may have somehow thought it would involve full sex and stuff.

You have to understand the context: Japan has a low birth rate. This show adressed to an audiance to "embellish" the idea of "conception".

I mean, if you were to be call upon to "make childs", your first reaction would be "for the good of a world, I guess."

The animation is not the stongest suit, but it doesn't need to.

One thing that I do agree on is that the flying racoon is anoying, acting like that kid who push it too far. But thinking about it, it is perhaps a necessary evil. It does add conflict, sometimes, and comedy.

You know, I honestly couldn’t care less about this show’s lack of sex scenes, its blatant attempts to convince Japanese viewers to have sex and do their part to increase the population, or the way it’s flat-out unrealistic by showing how this bland template of a main character is able to bed an entire harem of maidens to save some fantasy world. I mean, sure, this is clearly a case of false advertising and a cautionary tale of getting your hopes up too high, but I promise you these are all just minor concerns to me.

No, the real evil here is that complete lame-balloon of an animal sidekick, who refuses to shut the hell up and thinks it is so goddamn funny. Look, I just wanna know which moron thought it was a good idea to make some pain in the ass pimplezit of a fur rug the accidental star of this show. No wonder the main character could never get a proper move on with his ladies – if I had to listen to some high-pitched, helium-laced fart-face read out an infinite list of sexual innuendos as I did the deed, I’d pull right the hell out too, doomed fantasy town be damned.

Ideally, Conception would have told you the story of a newly-graduated high-schooler (this is important, kids, make sure you finish school), who suddenly finds himself tasked with the duty to father several leaping bundles of joy in order to save the magical world he gets transported to for whatever fucking reason. To the complete shock of nobody, there is absolutely no form of fathering or fatherhood to be found here – just courting scenes that have the main character sweet-talk his maidens to his bed chambers to make babies. Of course, they want to make sure this R-rated plot line is immediately accessible to the children (start ‘em young, I always say), so in a clever twist of events, the supposed Love Ritual isn’t even meant to be sexual at all. Instead, babies just pop right out of the maiden and get grown to face whatever the hell is threatening their parents.

Doesn’t sound like much, eh? And at least they gave up on that stork idea, yes?

Now imagine having to go through all of that, with the added bonus of the never-ending prattling, chattering, simpering, sing-songing, lusting, buzzing, goddamnfucking whatever it is this insane, demented, twisted, diabolical, absolute goddamnfucking abomination of a fur coat thinks is so cute.

So, you know, whoever greenlit that idea… come on, man. I just wanna talk.

[This review was made for the Anime Lottery Game: Fall 2018 event. A few good ears were probably damaged in the making of this review.]

I usually love Haram/Ecchi anime, its usually the only genre I watch. That’s why I was exited for this anime. The characters are boring, the story is irritating even for haram standards. Mana is the most annoying character I’ve ever seen. The straw that broke the camel’s back was episode 9. It was a complete yaoi fest. I couldn’t make it halfway through the episode. Huge disappointment of an anime.