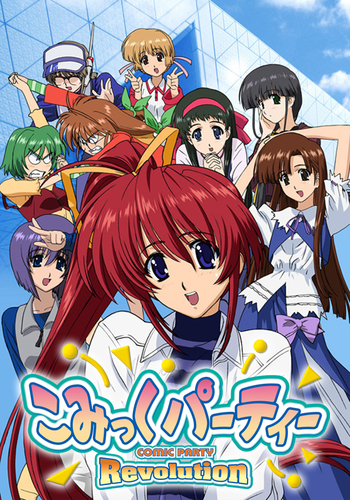 Oh boy… where do I start with this piece of crap? I guess I have to say, it’s not as bad as some sequels but this one is one of them. From the artwork to the voices, it just takes the cake. The story line is more like a stand alone show now, making each episode be Kazuki with a pretty girl. It turned into a date style show.

This had a lot less parody then the one before and less that had to do with the comic convention and manga creation. It turned more into a slice of life and sweetheart romance. In the end, I don’t really like the new change. It’s called Comic Party for a reason, not day in the life of Kazuki.

What the hell just happened? The animation looks pretty fucked up. Now, they did give them a better looking face, but now their heads are way too small and their necks way to long. The bodies are a bit un proportioned making them feel wrong no matter what way you look at it.

The voices in the English dub are so fucked up! Now, one or two feel better then the older version but they just had to mess up Taishi’s voice and that’s not cool! The characters sound much older and not well done ether. The new character, Subaru, isn’t that good ether. What’s with the ‘fugu’ part? Does she actually say that in the manga or is she even in the manga? Yu sounds like she became a Brooklyn accent and Eimi Ohba’s voice have just become an octave way to high. Now, I do like Kazuki’s newer voice and he doesn’t sound so much like a whiny brat.

The music is nice in the beginning and it feels a bit closer to a game music then the other ones.