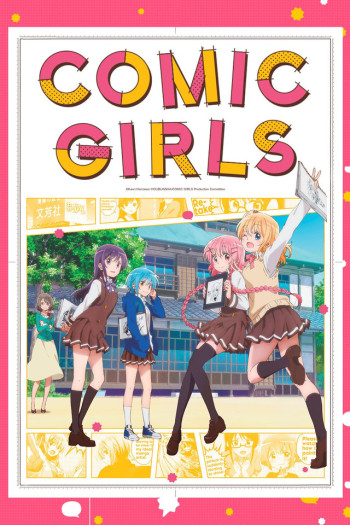 After her experience at the crepe shop, Kaos creates a new manga storyboard and takes it to Amisawa, but it’s immediately declined because of the shape it’s in. She goes back to the dorm to ask everyone what she did wrong and...

I Got the Worst Results on the Survey?!

I'll Go Shave All My Hair Off

It's Not Fair That Michiru Gets All The Love

My Life Has Reached Its Peak

Both these shows have many different girls growing and pursuing a passion. In K-on the passion is a band in Comic girls the passion is creating manga.

Both Anike have a very calming atmosphere with the characters are doing things that they're passionate about but at times taking it easy which is also filled with many funny moments.

When Hotaru transfers from a school in bustling Tokyo to a tiny school in a quiet country village, she’s in for a big adjustment. Although her new school only has five students, there's something about the laidback lifestyle that makes her feel right at home. It's a big change from the big city, but there are still plenty of new adventures to look...

Enthusiastic editor-in-chief Hana, serious Aki and their friends love manga so much that they've decided to start up a brand new manga magazine! Together, the new editors must find mangaka to work with, schedule photo shoots and perfect their typesetting, amongst other things. Little did the girls know that running a manga magazine would be more difficult...

Both series focuses on a group of young girls trying to become successful in the competitve world of manga. While Mangirl! is a short-form series and deals with the girls creating a manga magazine, Comic Girls revolves around a group of high-school girls living in an off-site dormitory designed to train them into becoming better manga artists. Both series deals with the normal nuances of the manga business such as meeting deadlines, negotiating with publishers, selling their works, and so on. If you want to see a more comedic aspect of the manga business, then check out either one of these series.