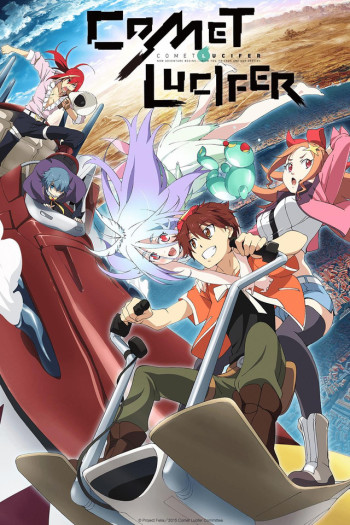 Last season we had Chaos Dragon, this season it's Comet Lucifer.

Comet Lucifer was animated by 8-bit and is an original work.

Wait, there is a story? Oh, right there is! A young boy finds a mysterious girl and they start an adventure together. Yup. Nothing new here folks. Needless to say, the story is bad. Real bad.

The first about 4 episodes is a Slice of Life. Episodes 5-10 are all the same. No really, the same thing happens in each of them. The big bad baddies try to get the girl, but fail miserably because they are dorks. But seriously, how stupid are these bad guys? You can't catch a child and a little girl. Oh wait! You've got the girl a couple times and you STILL lose her...

The final few episodes throw in a twist, probably the highlight of the show. However when you get to the twist, it's too late. The story is so bad, you really don't care. The ending is predictable from the first episode. However it does give closure.

The animation is decent. There are some shots that are very well done and animated pretty well. A majority of the anime though is average. Oh! Is it time? Did I mention DANCING VEGETABLES?

You can't make this stuff up folks. What were they thinking?

I have to give them props, some pieces are pretty good. The op is good, and some background music is good. However, with that being said, the action songs are very generic. It sounds like they ripped them from youtube... "Action Song".

hahaha. This is going to be good, lets go through the main characters.

Sougo: CTRL+V MC. He wants to save a girl because...well duh!

Felia: First half of the season she only uses the word "Sougo", so I hope you enjoy that name. Second half she can talk more, but still except her to say "Sougo" a lot.

Kaon: This girl has a big butt and screams a lot. I...I really don't know what else to say.

Maura: A rock. Don't worry you will get some fanservice later on because why the hell not.

Its a bad anime. I mean...It's bad. I was expecting some incest to pop up at anytime. The story is predictable and uses so many tropes its ridiculous. I don't know what genre this anine even is. Slice of Life? Action? Who knows?

The animation is average. The sound is mostly average, however does have some good pieces.

The characters are laughable. There is almost no back story to a majority of them. I'm not sure what they were trying to achieve, other than "save the girl".

I think this anime might of been a joke being played on us. "Yea! There is going to be One Punch Man...so let's give the fans a punch of our own!". Well, homerun guys.

Do not watch this, in fact, you should feel bad for reading this review. Even clicking on this anime is a sin. Bad. Bad! Nah, it's alright I love ya. You might find some enjoyment out of watching this if you are new to anime, if not though, don't bother. (If you are new to anime and enjoyed this, nothing wrong with that! You do your thing! :D)

If you did finish this anime, here is your prize.

Thanks for reading my review, this is my first one and hopefully you have enjoyed it! Feedback is welcomed. :3

Think of Eureka 7.
Now imagine it being terrible, life-less, and with an even more convuluted plot.
Add in Asura Cryin'
And shove the fever-dream into only 12 episodes.

That's Comet Lucifer in a nutshell.  It's a series that starts out strong but quickly falls to pieces.  The first warning is introducing the lolicon l33t hacker, a child soldier/sociopath, and a guy who fights to fight. Also the planets are things and stuff for reasons.  Then whatever likability the characters had are ruined thoroughly, by the last episode and its post-credit scene.

Worst of all, it's not consistently terrible enough to be 'so bad it's good' like this season's Cavalry or Asterisk Wars.  Stay away; there's better.

this is a huge waste of time. the story is the typical anime fair, though they did blend shoujo and shounen fairly well and had an original concept driving the show, they fail to do anything spectacular with it, and the ending is bs. the start is slow, the pacing feel forced, and it's completely predictable. not one thing happened that i hadn't predicted 2~6 episodes in.

the animation is mediocre at best, nothing flashy and the fights are sloppy.

the music is mostly annoying and only shines in a few scenes.

the characters are static and lifeless, except for felia, the one redeeming quality of this trash show. but she even loses a huge chunk of appeal after episode 5

it seemes really promising but i found myself forcing myself to watch it, and the finale i hoped would save this show only raged me at it more, felia deserves better :c

in the end they tried to make a fantasy blended mecha anime and gave us a steaming pile of poo.

Oh my lord.  I understand that we all learn first by copying something and then improving off of it, but this anime just completely failed at even coming close to its competition.  Its competition is literally A DECADE OLD, and hella better then this trash.

granted that was back in the day when they actually finished anime through and through.  I digress.

Im not going to put tons of effort in on this.  The story was trash, and I mean it was fractured like this planet I just blew up in Spore.  Leaving a trail planetary wreckage around a much greater sun of Eureka 7.  Aside from being heavily fractured it was ridiculously unrealistic.  At what point does a retardedly scummy little teenager decide to attack a mobile military base?  In what world does a military weapon placement (machine gun) on said mobile base, plink off of a tiny hoverboard and then explode into massive flames seconds later?.  How the hell do they miss that much in the first place. . .

ug, and that is only 1 rant of many I have for this one.

im not finishing, it sucks.

CL was a kind of unknown anime from the fall season and judging from the low scores it got on AP I was one of the few who actually enjoyed this anime. Let me tell you why.

*The first positive point about CL was the art style. I loved the world that was created in this anime. If you have seen my video’s than you know that I really like art styles who use a lot of bright colors and CL’s art style played perfectly into this. Also the character design was very bright and colorful, so 8-bit did a very good job there in my opinion.

*Going further on the characters: Felia was so goddamn cute in the first half of the anime. I mean come on, how can you not fall for her kawaïness? Just her whole playful and childish personality made her a very fun character and therefor very entertaining and heartwarming to look at.

Now in the second half of the anime when Felia grows up, she did lose some of that cuteness that she had when she was small. But her growing up made it possible for her as a character to experience and use new feelings, new emotions. But she was less cute.

Now there was another character that I liked even more than small Felia and that was Moura. Moura was the best character in the anime. Sometimes she was so funny and at other times she was the voice of reason in the anime. And as Felia’s guardian she risks her own life and limbs several times in the anime to protect her and Sogo. But it was mostly her comical personality that made her character for me. Moura made me laugh in every episode of CL. The voice actor of Moura also played a big role in that by giving Moura such a fun and catching voice.

*Than it’s time to talk about the story of CL. Now this is going to be divided over the positive and negative part of this review because there were several elements that I liked about CL’s story but others were less logic and therefor I will discuss that in the negative part.

What I liked about CL’s story was that sometimes it went of the whole colorful, happy anime path. At times this anime is quite dark. If you look at the cover of CL and most of the anime than I don’t think you expect or suspect that people will die in this anime. Well they do, mostly in the flashbacks of one of the characters but there are also the deaths of two important characters in this anime. I didn’t see their deaths coming especially of one of the two. Now I’m of course not going to spoil who dies. But I was really surprised about these dark themes that CL dared to use because I completely did not expect that when I decided to watch this anime in the fall season.

But what surprised me the most about CL’s story was the ending. Now others may say that it was a very generic ending and that they saw it coming from miles away, but I didn’t. I was expecting the usual ending that comes with these kind of anime’s, being the happily-ever-after ending. But CL decided not to do that but deliver an ending that was quite sad if you think about it. Now also here I’m not going to spoil the ending but I was left with strongly mixed feelings after I saw the last episode of CL.

*Now that were the things I did like about the story but unfortunately CL’s overall story wasn’t the best I have seen. The story is really random and confusing at moments especially the further we go into the anime. This is clearly shown in the last two episodes, I was really confused there and certain elements were introduced completely random and whit out any clear explanation. And that’s probably the main reason why CL receives such low scores. It just introduces too many things whit out build up. That was, as I mentioned earlier, really confusing for the viewer. It was a real shame that an anime whit such beautiful art got such a “bad” storyline.

So as a conclusion, I was one of the few that actually liked CL. It was a very fun anime with fun characters and a surprising dark side to it. And that’s why I’m going to rate Comet Lucifer at 4 stars. In my opinion this is an underrated anime but I also must admit that the storyline is one of the weaker ones I saw in the past Fall season. But there were definitely elements that made this anime stand out in that dull Fall season.