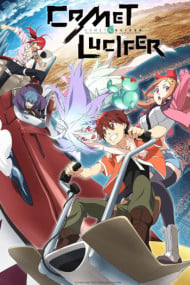 Comet Lucifer is a fantasy set on the planet Gift, where precious crystals called Giftjium are buried in the earth. The main character Sougo lives in a prosperous mining town, Garden Indigo, and loves to collect rare crystals. One day, he gets caught up in a dispute between his classmates, and somehow loses his way deep in the ruins of a mine. There, he at an underground lake, he discovers a blue-haired girl with red eyes named Felia, and his adventure begins.

This review contains minor spoilers and dancing vegetables...yes, dancing vegetables. Last season we had Chaos Dragon, this season it's Comet Lucifer. Comet Lucifer was animated by 8-bit and is an original work. Story: Wait, there is a story? Oh, right there is! A young boy finds a mysterious girl and they start an adventure together. Yup. Nothing new here folks. Needless to say, the story is bad. Real bad. The first about 4 episodes is a Slice of Life. Episodes 5-10 are all the same. No really, the same thing happens in each of them. The big bad baddies try to get the girl, but fail miserably because they are dorks. But seriously, how stupid are these bad guys? You can't catch a child and a little girl. Oh wait! You've got the girl a couple times and you STILL lose her... The final few episodes throw in a twist, probably the highlight of the show. However when you get to the twist, it's too late. The story is so bad, you really don't care. The ending is predictable from the first episode. However it does give closure. 2/10 Animation: The animation is decent. There are some shots that are very well done and animated pretty well. A majority of the anime though is average. Oh! Is it time? Did I mention DANCING VEGETABLES? You can't make this stuff up folks. What were they thinking? 5/10 Sound: I have to give them props, some pieces are pretty good. The op is good, and some background music is good. However, with that being said, the action songs are very generic. It sounds like they ripped them from youtube... "Action Song". 6/10 Characters: hahaha. This is going to be good, lets go through the main characters. Sougo: CTRL+V MC. He wants to save a girl because...well duh! Felia: First half of the season she only uses the word "Sougo", so I hope you enjoy that name. Second half she can talk more, but still except her to say "Sougo" a lot. Kaon: This girl has a big butt and screams a lot. I...I really don't know what else to say. Maura: A rock. Don't worry you will get some fanservice later on because why the hell not. 2/10 Overall: Its a bad anime. I mean...It's bad. I was expecting some incest to pop up at anytime. The story is predictable and uses so many tropes its ridiculous. I don't know what genre this anine even is. Slice of Life? Action? Who knows? The animation is average. The sound is mostly average, however does have some good pieces. The characters are laughable. There is almost no back story to a majority of them. I'm not sure what they were trying to achieve, other than "save the girl". I think this anime might of been a joke being played on us. "Yea! There is going to be One Punch Man...so let's give the fans a punch of our own!". Well, homerun guys. 3/10 Verdict: Do not watch this, in fact, you should feel bad for reading this review. Even clicking on this anime is a sin. Bad. Bad! Nah, it's alright I love ya. You might find some enjoyment out of watching this if you are new to anime, if not though, don't bother. (If you are new to anime and enjoyed this, nothing wrong with that! You do your thing! :D) If you did finish this anime, here is your prize. Thanks for reading my review, this is my first one and hopefully you have enjoyed it! Feedback is welcomed. :3

Think of Eureka 7.Now imagine it being terrible, life-less, and with an even more convuluted plot.Add in Asura Cryin'And shove the fever-dream into only 12 episodes.That's Comet Lucifer in a nutshell.  It's a series that starts out strong but quickly falls to pieces.  The first warning is introducing the lolicon l33t hacker, a child soldier/sociopath, and a guy who fights to fight. Also the planets are things and stuff for reasons.  Then whatever likability the characters had are ruined thoroughly, by the last episode and its post-credit scene.Worst of all, it's not consistently terrible enough to be 'so bad it's good' like this season's Cavalry or Asterisk Wars.  Stay away; there's better.

this is a huge waste of time. the story is the typical anime fair, though they did blend shoujo and shounen fairly well and had an original concept driving the show, they fail to do anything spectacular with it, and the ending is bs. the start is slow, the pacing feel forced, and it's completely predictable. not one thing happened that i hadn't predicted 2~6 episodes in. the animation is mediocre at best, nothing flashy and the fights are sloppy.  the music is mostly annoying and only shines in a few scenes. the characters are static and lifeless, except for felia, the one redeeming quality of this trash show. but she even loses a huge chunk of appeal after episode 5 it seemes really promising but i found myself forcing myself to watch it, and the finale i hoped would save this show only raged me at it more, felia deserves better :c in the end they tried to make a fantasy blended mecha anime and gave us a steaming pile of poo. 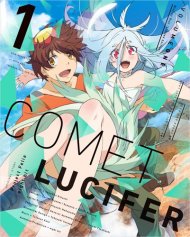