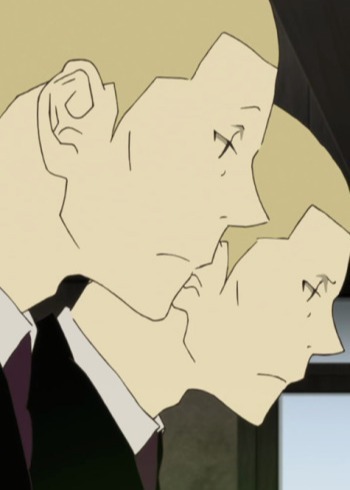 "Every single day as always. The way to home as always... The thing waiting ahead is..??"

This episode is a making film of #12 "evangelion: Another Impact (Confidential)"

One day, a girl who had queerly long legs came before them.Her red shoes caught the eyes of BUBULINA. She said, “With the shoes, you can dance very well like this. Do you want to try?” “Yes!” BUBULINA strongly nodded her head. In the next instant, the red shoes held on to BUBULINA…!?

MOBILE SUIT GUNDAM series are still favored by various generations [and] passed its 35th anniversary. The animators who played the core roles in the memorable first series MOBILE SUIT GUNDAM are Yoshikazu Yasuhiko [and] Ichiro Itano. We would like to leave the key animations [of] the film production to posterity to praise their achievements, which influenced not only the audience but also the current anime industry.

"We confirmed the first evidence. Next..."She was falling asleep before she knew it. But conversation of unknown two people kept staying in her head. "Second?" A man and woman who call themselves polices appear before Asami. But she is still suspicious of them. What is "the fire incident without burning" they are talking? What is "the time for reproduction"? And what is "the unavoidable third secret?"

"Hammer him dead." I beg you, please hit, crush, and kill him.

20 minutes walk from Nishi Ogikubo Station, 2LDK, key money and security deposit required for 2 months, no pets allowed. Rika woke up on the sofa in the usual room. She feels the unusual atmosphere…

"I sing with all my heart."