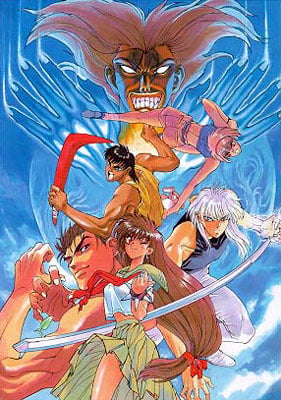 Bakuen Campus Guardress is an action mini series that aims to only entertain with flashy battles, slapstick jokes and busty chicks. You won’t think deep or feel connected with the characters and the story. It’s only a nice show and nothing more.

ART & SOUND SECTION: 7/10 [Typical 90’ but with very detailed action, city-leveling scenes.]
The show is animated by Production I.G., a colossus studio in the field of anime. This is of course one of their older minor works and doesn’t look that good. Being comical at its core, the graphics and sound jump back and forth from serious and detailed battles to lame and funny every-day situations. This is a problem if you don’t like sudden (and unneeded) changes in the genre of a series. Beyond that, they are very good on their own.

STORY SECTION: 4/10 [Ok… There is little story in all and sucks big time when you describe it.]

Tens of thousands years ago, invaders attack and destroy an advanced civilization that predated mankind. In modern times, the guardians and prince of that time reincarnate and history repeats. So… Busty super chick must protect good guy/dork she loves from other-world invaders, who want to open a portal to their home world and seemingly intend to rule the world. Half way through, it is revealed that she has to kill the guy she loves in order to keep the portal closed, the bad guys/invaders only want to return to their home, and the main villain wants to destroy the world instead of conquering it.

That’s pretty much it. To tell the truth, you won’t care about the story as you watch the series, since your attention will be focused on the action and the jokes rather than the plot. At least the conclusion of the story is not clichéd, something you will definitely notice.

CHARACTER SECTION: 5/10 [Nothing that will stick to you.]
I don’t even remember a single name they had. Very common and typical in anime, we have an irritating, fan service stupid broad, a too goody dork teenager and an insane super villain. What little they have that makes them interesting is the humor and not their personalities.

ENJOYMENT SECTION: 6/10
It’s a flashy and funny mini series but nothing more. You really get to enjoy it for what it is but the feeling will go away fast.

VERDICT: 5/10
The accused is found … GUILTY! … For selling us a pretty box with nothing inside.