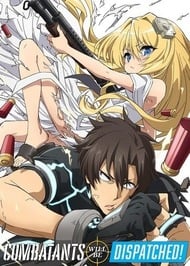 Turns out, evil takes initiative! With world domination close at hand, the Kisaragi Corporation turns its sights on interstellar conquest, and who better to take over a magical world than two randomly assigned minions—Combatant Agent Six and his android partner Alice? But Six’s path up the evil corporate ladder won’t be easy—a Demon Lord’s army is hatching its own nefarious plan!

here it is people proof that lighting does indeed not strike the same place twice. Before I thought about watching all i heard was "from the creator of Konosuba!" Over and over which really gets expectations to be at least close to the fun of konosuba well I can fairly say it wasn't nearly as good and damn near no worth the time. Of course give it the old 3-4 for watch test but as a warning if you didn't enjoy the small amounts of dick/ vulgar jokes on konosuba well this show is LITTERED with them and I mean litter like trash because when the same kind of joke hits you over and over it's not exactly the most fun thing to watch. That's not to say that it isn't funny when they aren't reusing the same 4 strings but that is very few and far between. For anyone needing a bit more info or are just curious here's the quick fire detailed review(don't worry spoiler free:) so first the animation, to many shows in the past year has come out with amazing quality animation, this looks like something back in 2010 there is nothing that catches your eyes..... unless you just really like looking at anime boobs all day then uhh here ya go  next sound, this is subjective but the music was not my favorite either. It was very generic and nothing stood out.  Now the characters, when you aren't being bombarded by a load(yes that's a play on words, they almost all are) of dick jokes to the face then the characters are fun to watch but again its few and far bewteen.  finally the story, it's a different twist of an isekai, but with none of the flair or mystery that most of the popular isekais have so yet again it falls right back into the nothing special category. wrapping this up into a bow I'd have to say that this show felt out of time, it would be like watching heavens lost property or any of the other outrageously erotic shows from the 2000-2010 but it doesnt have any of the "oh it's old so it's alright" kind of thinking to protect it. Forget who the author is this show just isn't worth the time. Go watch the konosuba movie 6 times you'd get more laughs out of that than this. Hi to the people who made it this far go get you some cake or something you earned it also thanks for the read and have a good day!

3S review no.36 (short, simply and sweet/salty/spicy) I mean, not much I can say here, it’s just a silly comedy that’s mostly silly and not really funny. This show knows exactly what it is and it doesn’t try to be nothing else. It is light, goofy, a little pervy, not in an annoying or disrupting way, it is honest with itself and with me, and that’s more than enough for me to treat it lightly. We follow an agent of a supposedly evil organization that is being sent to a planet to make preparations for them to conquer. He gets an android as a helper (little girl looking android ofc), then when he lands on the planet he gets more helpers in his harem (all female ofc). As to be expected they end up helping the kingdom instead of conquering it. Ofc the agent is not very bright, he messes up all the time yet somehow manages to pull through, and that’s the comedy of the show, pulling through with awkwardly evil, pervy, unconventional ways. He is a lowlife scum that pulls off the lowest of lowest of tricks to gain an advantage. Also doing “evil things” nets you evil points that you can use to order stuff from the organization, like explosives and stuff (I used quotes cause evil stuff is like looking underneath a girls skirt or walking in front of someone with your fly open). Is it funny? Once in a blue moon yeah, it is, a couple of times. But certainly not often enough for you to care too much for the plot. Also the story doesn’t end, there will be another season, if this was just a one season silly comedy with a beginning and end, it would certainly be a lot better. Characters… I don’t know what where you expecting here, typical cardboards, defined by a single trait with their only purpose being comedic. Do they succeed? No, not that much, but they have their moments here and there, mostly the wheelchair lady, she has a certain charm to her. Animation is alright, better than you’d expect actually. Even though character design isn’t great, facial expressions (which is very important in my opinion when it comes to comedy) are nice. So is the voice acting (which is equally important), they deliver their not so funny lines in a funny way. The rest of sound design is surprisingly sufficient as well, and so is the opening and the ending, better than what you’d expect. So is it worth a watch? Meh, not really, I wouldn’t recommend it as good show but If you wanna watch something light on your second monitor while you do something else though, its passable. You can certainly do a lot worse, like watching How NOT to summon a demon lord: Omega for example, another seasonal comedy that I tried that was simply too unbearable. If you are looking for something similar, a couple of seasons back I did enjoy The hero is overpowered but overly cautious a little more than this one, it’s a similar show with a more coherent story and a couple of more funny moments so I would suggest that one as a trash comedy over this one. But if you are looking for an actually decent comedy show I would suggest Sleepy princess in the demon’s castle. *something irrelevant: the android looks so much like the vampire from Artifureta, like really really similar, thought it was a crossover at first!

From author of Konosuba* this season gets a Konosuba clone. The initial premise is interesting and had a lot of potential to be fresh take on isekai fantasy, but because it’s just the same, it’s disappointingly too similar. Just as Konosuba it abandons any attempt to develop story for sequence of short-term goals, which have nothing to do with overall objective of conquering the planet. We have evil organization, which doesn’t do anything truly evil on the screen as far as the series is concerned. Even if they do something violent, they feel bad. Same goes for main male protagonist and his android companion. Evil element is even more undermined with system of “evil points”, which is supposed to be funny, but becomes just excuse for agent six to do something lewd or annoying to girls. It quickly becomes overused trope. While other people look on the agents as doing something despicable, when they are planning against enemies. They are just using obvious strategies given the situation and equipment at the hand. For an example attacking enemy’s supplies rather than the main force. Even more than Konosuba the series embraces ecchi situations, where agent six rather than usual anime protagonist reacts in embracing the situation if not proactively looking for it. It also embraces main male character being more jerk to women around him. Which might be refreshing in way Konosuba did it by Kazuma not treating girls nice all the time under any situation as typical anime lead character. The only thing which series adds in regards to comedy are dick jokes. In regards to other elements. There is more fanservice. In terms of characters, it’s pretty much just rehash of Konosuba. We have Aqua equivalent in Snow, who is quick to jump into action without thinking, fail and whine. And she whines quite a lot. The only difference she is mostly motivated by money and has some genuine feelings for agent six. We have Megumin equivalent in Grimm, who is even more useless with her curses that have like fifty-fifty chance to fireback on herself. She is immortal and usually just dies first, then to be revived the next day. Darkness’s equivalent Rose is over obsessive about one thing food. The only different element is Alice, but even then, it’s just as overused trope of stoic, smart and small blond girl (plus android in this case) with snarky attitude. Visuals and soundtrack are ok for comedy series. It isn’t the thing anyone would watch the series for to begin with. At the end of the day, it’s just rehash of Konosuba. From reactions I saw some think it’s better other think it’s worse. Personally, I would lean towards the side, which considers it worse, than Konosuba. In itself it’s a joke already done before. That is prevailing sentiment I had throughout the series. Konosuba added dimension of parodying common isekai tropes. This doesn’t bring anything of substance to the table. By watching similar show already this thing couldn’t have that same impact. If you liked Konosuba you might enjoy it. Watch 2-3 episodes, if you like them the rest is pretty much on same level. * Kono Subarashii sekai he shukufuku wo! 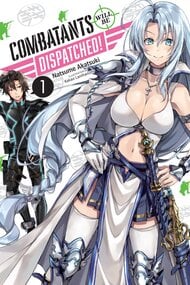 Combatants Will Be Dispatched! (Light Novel) 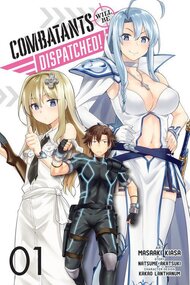