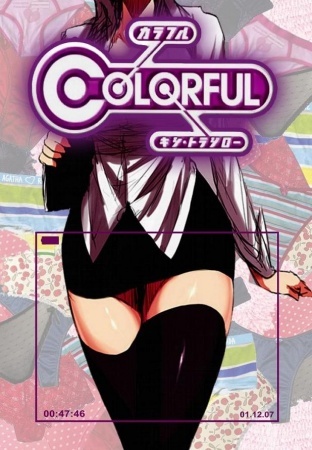 StoryPants. This single word not only explains this series’ plot but also sums up my entire opinion of it. Except that last sentence is partially a lie, because Colorful has no plot. None. Nada. Zip. Essentially, this anime is nothing more than a chain of sketches depicting the most pitiful men ever animated as they drool, bleed and cry their way through a bevy of panty shots. Initially the humorous look at such pathetic guys and the lengths they’ll go to in order to satiate their depraved lusts is funny. However, after two or three episodes of exactly the same thing –except in a slightly different setting – the novelty quickly wears off, leaving behind nothing but a repetitive, hollow shell. Occasionally a slight smirk may creep across the face when some poor fellow finally gains sight of those elusive delicates, only to find a bulge that doesn’t belong there; but sadly, most of the series meets with a sigh and a quick glance at the time bar to see how much longer this crotch-filled crud is going to eat away at your life. Interspersed with the cast’s perverted antics is a series of abstract pieces where the visuals and sound are not only completely disconnected from the plot, but also from each other. Now, I’ve spent several years of my life at an art college, so I’m used to watching weird, experimental films while trying to analyse the supposed hidden meaning behind them, but even I can’t see what the hell the point of these sections is! It’s like the animation staff are being weird for the sake of it – and it’s not even as if this footage consistently serves as a buffer between different scenes. They are utterly meaningless and, frankly, quite annoying after a while.AnimationAdmittedly, Colorful’s visual style does fit well with its plotline: it is rough and crude. Character designs are simplistic, no neon hair and eyes the size of footballs here, but they do tend to fade into the background. Unless there’s some kind of facial contortion – in which case they appear quite ugly or even constipated – the cast looks so dull that they’re virtually unmemorable. Tragically it seems that, in the Colorful universe at least, women suffer from a debilitating disease, which causes their noses to disappear entirely on occasion. Unless I’m missing some craze where nose-less females are the height of attractiveness, this is incredibly off-putting. Amazingly, no one in the series seems to notice this phenomenon, though I suppose that’s because they’re all too busy staring up the girls’ skirts to pay attention to their faces.SoundColorful’s soundtrack does its job, but that’s about as far as it goes. The opening theme is very fast and a bit bizarre, which is reminiscent of what’s to come – so in that sense it fares well. The series’ voice acting is neither outstanding nor ear-bleedingly awful. As such, the series’ overall sound design is fundamentally forgettable.CharactersSince there are only a handful of recurring perverts – I mean cast members, it’s quite difficult to judge Colorful’s characterisation. Since no one ever develops from their Neanderthal grunts and incapacitating nosebleeds, it’s simply down to evaluating each pathetic male by his rampant fetishism. Who could forget the gym teacher whose inappropriate obsession with his young student makes him cry with sheer joy at the wet ass-mark that she leaves on the ground? What about Steve, the exchange student who dedicates himself whole-heartedly to capturing the perfect “upside-down Fuji” on camera… Or the tragic guy whose long hair so frequently masks his view of the perfect panty shot; doesn’t your heart just go out to him? No, since Colorful’s repertoire of feeble one-dimensional men-folk is flatter than a loli’s chest and ultimately far less entertaining.OverallI’ll probably have a hundred raging feminists on my doorstep tomorrow for saying this, but I don’t care that this show unashamedly objectifies women; pick up any ecchi series and that’ll happen – besides, it’s the men who come off looking worse anyway! No, my gripe is with Colorful’s repetition. It uses the same gag time and time again, until the humour itself becomes stale – even Ping Pong Club has more variation in its comedy content. I’m just thankful that each episode is only six and a half minutes long, so that I didn’t waste even more of my time on this craptastically shallow series.

There are many reasons why a piece of media is forgotten to the sands of time. Sometimes it's because something isn't very good, sometimes it's because it was released at a time that prevented it from getting a better foothold. In Colorful's case, it's because it just wasn't very memorable. So what's the plot for this series? It doesn't have one! Based on a manga series, Colorful is a series that focuses on the misadventures of men staring, peeking, glancing, looking, and glaring at women and their efforts to get that extra eyeful of harmlessly exposed panties, bras, and occasional cleavage and the outrageous consequences of their actions. It's more like a sketch show with a few re-occurring characters and exactly one sketch rather than an ongoing series, which should be pretty obvious with it's tagline "Roses are red. Violets are blue. This show's about panties." Some series have a character that's a pervert for comedic relief, or even have it as the main focus, but Colorful distills the perverted comical relief down into 96 minutes, consisting of 16 short 6 minute episodes. The whole thing pretty much feels like a montage of the slapstick pervert characters from a bunch of other longer running series. By the end of the series it definitely feels a little long in the tooth, and it doesn't have the benefit of being broken up by an actual story or other events going on. It's ecchi comedy distilled into the length of a feature film. I'd complain that a series with this little substance got made, but there have been series out there with somehow even less substance. And at least Colorful doesn't pretend that it's something that it's not. If anything, I can give this series credit for at least being interesting with it's animation and art style, often being mildly creative with the way it looks. Coloful has been described as a very love it or hate it show, seemingly being described as "wildly funny" or "tasteless and depraved", and it's easy to see why. It's very unashamed of what it is, a series of vulgar panty jokes one after another with very little breathing room. I'm pretty sure there is an audience out there for something like this, but it would be an incredibly niche one at that.

Oh dear… a show all about strange men trying to see women in really perverted ways. The show is really bland, not really having any story, any depth, and is made for men just to wank off. It’s as though it’s a perverts guide to finding something to get their jollies off twenty-four seven. I would put this up to par with Eiken, something that should be a hentai just to get it over with… of course the men are such losers that I can understand why no women would want them. They get off just from the simplest things like a hint of a short skirt. I like some ecchi but only when there is a good story and when there is a reason for it, not when it’s plastered in my face. And the show is so random it’s like watching a rather un-entertaining animated version of Monty Python’s Flying Circus. Things might have been random but they were also rather repetitive and increased the bordom that I felt while watching this. The animation is really bad, looking like it was made by gonzo on a really bad day. It’s not detailed at all, even to the point of not having noses, and even doesn’t have shading for most of the show. Characters are very un-proportional, even to the point where they become like spaghetti sometimes. Sometimes they mesh really odd artwork in with it like slightly realistic or strange textures but it really just looks bad. When there is detail to the faces, it looks like troll faces online which I was never fond of. The opening song sounds like it would fit perfect for an Excel Saga episode with a girl that doesn’t seem like she can sing shouting at the top of her lungs or with a smokers cough. The men’s voices are overly creepy and the female’s sound like they were taken from hentai and porn just for kicks. In the end of this whole show, I have come to the conclusion that all men are perverts and should be cut off from the rest of the world. (Ok, no I don’t think that, but if you watched this show, I think you will understand why I said it.) Once you see one episode, you seen them all really. 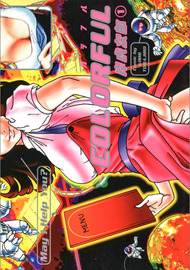