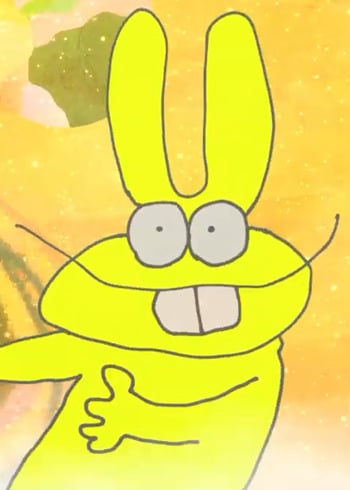 I'm one color, now I'm another, and another, but I'll return to where I started.

It's a kaleidoscope of colors your eyes may or may not enjoy.

Yeah not much goes on in either of these music videos but the time put into both to match the transitions was probably pretty tiring.

Animals feature in both and no single critter is really the focus of either, despite the Lite: Rabbit title.

If your are looking for an example in how to mix together some rather simply visuals that morph in complexity with time alongside some music these animes would be a place to start.

Both of these animes features one thing turning into another and ending right where it started [with the original creature] the same yet different from what it was in the beginning.

If you enjoy morphing you'll probably like both of these.

Both of these feature morphing.

If you like one you should check out the other.

Color Cycling features every rainbow color some in-between while Fantasy is solely black and white.

Looking for another take on a similar impetus then these are for you.

Looking for inspiration on how to take one thing and make it another, then these are good examples. Whether you're into animals, blobs, or things in-between.

His father thinks he’s a failure, his students think he’s eccentric yet magnificent, and the impoverished farmers of his town think he’s an insufferably idealistic spoiled rich boy. Before renowned Showa-era poet and author Kenji Miyazawa became famous, he lived in a small town, struggling with personal philosophies that no one around him understands, and writing novels without resorting to selling out.

Carving a lonely figure on the skyline of his home city, Catman is a solitary guy who spends his days as he pleases - except, he doesn’t always have that much luck and really hates the town he’s living in. From whiling away the hours at the slots to playing drunken games of bowling, Catman just gets on with life and does whatever he feels like.

Catman is still revelling in his solitary lifestyle, and wanders the streets passing the time however he sees fit. From becoming inspired by his kung-fu movie hero, to starting up a feud with a local apple salesman, the apathetic and foul-mouthed feline takes each day as it comes, even if it means getting beaten up or losing a possible lover…

Catman is still as unlucky as ever, to the point where even falling from a building leads to him to become an enemy of the cheese-bearing mafia! Though his life is anything but dull due to encounters with flirtatious booze hounds and street gamblers, Catman is content to live the way he wants: moving from one drink-fueled brawl to the next.