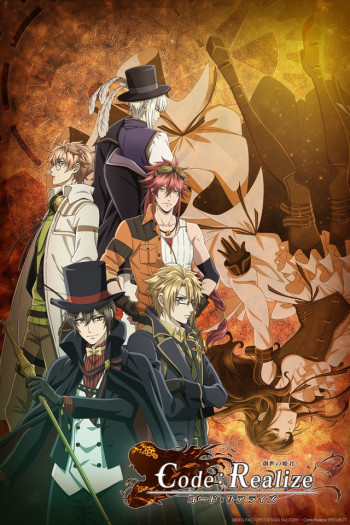 If you're looking for anime similar to Code: Realize ~Guardian of Rebirth~, you might like these titles.

Although this show (Code:Realize)  only started to air I find it's setting similar to the Daughter of Twenty Faces. A gentleman thief comes to steal a girl from her misery and show the world.

Daughter of 20 faces is about a young girl who leaves her family and finds herself a new one amoungst thieves who love her. It's a really good show, I honestly can't think of too many simularities specificly, but the vibes are the same, just this on is more family orented I think instead of romantic. It's been a while since I've seen either to be honest.

Just like the anime, this anime is a reverse harem with many good looking guys. It is very interesting to see the big cast of characters.

One day, Yuzuki is enveloped by a mysterious light suddenly emanating from her cell phone and finds herself in an unfamiliar place. The scenery spread out before her almost resembles Sengoku period Japan-- But this is another world known as "Shinga" where non-human creatures such as vampires and werewolves reside. Long ago, the various tribes of Shinga lived together peacefully under the protection of the Himemiko who possessed special blood. However, one day the Himemiko suddenly vanished. With the protection of the Himemiko gone, the world has fallen into a period of strife.

They're both set in the past, both are sad, both incorporate war, and both have a bit of romance (Code:Realize however is more to do with romance, but they're both still really good). Also the protagonists are female which is a plus!