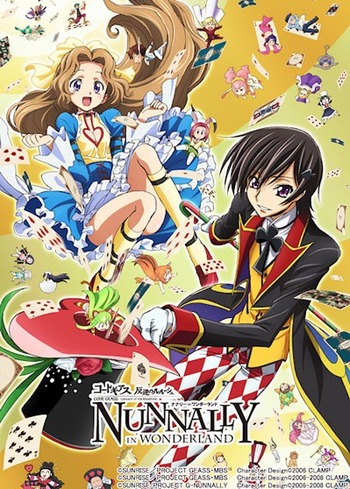 First off, this is an OVA, so not much is expected from it. With that being said, it's basically a comedy rip off from Alice in Wonderland.

For the most part I much enjoyed the charrecter casting and the special type of the touch of Code Geass in the play. If you like Code Geass, You'd probably enjoy it, if you haven't watched Code Geass, you won't get many of the jokes. But either way in the event that you believe this OVA not only ruined the name of Alice in Wonderland, but it also ruined Code Geass as well, than you just might be right.

In the end it always come down to peoples preferences, even if I'm aware that Code Geass is being turned into a milking product, that doesn't mean I still can't enjoy it. With that being said, if you're a Code Geass fan, then I urge you to watch this show and let me know for yourselves what you think.

In hindsight I probably should have just watched this when it came out, instead I waited years so the mental build-up I had for this to be great was pretty big.

There was WAY TOO MUCH sexual fanservice going on. Lelouch is supposed to want to protect his innocent Nunnally, having her interact with barely clad girls who seriously fight about who’s the hotter rabbit was repulsive. Fawn Shirley was way out of character outfit wise, while her words and manner towards Nunnally were sweet her appearance -basically naked derriere -  is the focal point of their entire interaction.

Lelouch seriously insults himself and all that he did for two epic seasons of anime at it’s finest. Gah, it was frustrating to watch.

I’ll try being a bit positive to even out my personal disappointment.

1)The page turning effects were pretty good and the overall art compared to the picture dramas from the series was much brighter and worked well for Wonderland.

2) It was nice to see/read that the difference between strategy and tactics remained apart of the story.

3)Li as Humpty Dumpty was laughablly adorable {I probably need to search fanart of him in that} and Arthur makes an appearance ^^.

Ha, that was three nice things, yay for me. Boo for this.

Story: As the title implies, it's a Code Geass x Alice in Wonderland crossover. Yeah. It uh... does the story well, some changes here and there... to be frank, I stopped giving a damn when booty butt Fawn came on screen. It's fine and dandy and Lelouch's brotherly love for his sister is entertaining as the narrator but I don't know. I expected something... more. Grand narmy theatrics, more than walk-on characters, just more.

Animation: Dat ass. I ain't kidding, Shirley as a Fawn had one fine ass. It's so noticable that I could barely read the subtitles. Damn fine, but I can't neglect all the cleavage. If you're a gal, you have cleavage. Don't even know if there were women without a cleavage-revealing outfit. But that brings up the costuming overall, which ranges from "Awwww yeaaaaah" to "Fabulous". Quite good overall but one of the best was the King of Hearts, especially with his sweet hat. You should check it out.

It's a picture book, mostly, but a few scenes are animated, including bouncing cleavage, C.C. and her bootylicious outfit (Needed more booty shots) and a few others. Also had a fight at the end that on hindsight reminds me of Paper Mario.

And the Mad Hatter, faaaaabulous~

Sound: Holy crap the King of Hearts. Everything he said was pure honey glazed ham, and it was delicious. And dat theme, you can just taste it. Everything else, as you'd expect. But that ham, total selling point.

Characters: It's an OVA about Alice in Wonderland. I already talked about the fanservicey parts in animation so what more do you want?

Overall: At first I was meh but when dat ass appeared, I just stopped giving a damn. Just rolled with the fanservice and ham. Even if you don't expect much, chances are you'll probably be disappointed.

While i thougt tthis to be utterly insane it was also really funny. It was also refreshing to hear the original soundtrack in the background. While the dialougue was interesting and weird, the little additions lelouch made were funny. So overal i give it a six due to it being funny. Stilll it was slightly childish and lacked that maturity level i expected. So to all i say YES FOR THE SPECIAL AMDMINISTRATED ZONE OF CROQUET!!!