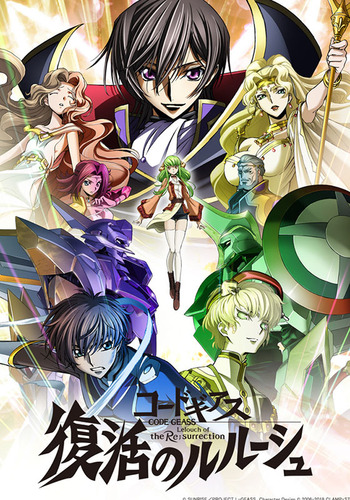 If you're looking for manga similar to Code Geass Movie: Lelouch of the Re;surrection, you might like these titles.

At the turn of the twenty-first century, policing in Tokyo has taken a very unique approach: officers fight crime with cutting-edge mecha called Patlabors. Division 2 of the Tokyo Metropolitan Police Special Vehicle Section 2 is one team entrusted with these powerful weapons, but its assembly of clumsy eccentrics could prove a challenge all of its own. Under the staunchly old-fashioned leadership of Chief Sakaki, there are, among others, deadpan Captain Goto, mecha-obsessed Noa Izumi, and straight-talking Asuma Shinohara. Follow them as they try to outwit mad terrorists one minute and survive dysfunctional team dynamics the next!

Several thousands of years from now there is the Joker Galaxy of five Star Systems, where there is a long, long war being fought. The god of light, Amaterasu, is trying to unite the galaxy under his rule. The fighting stands between giant mecha called Mortar Headds, their pilots, the Headdliners, trained since birth for their task and the female humanlike computers called Fatimas, necessary for controlling the MH. Many are the lives and destinies found throughout the more than thousand year long era of war, although Amaterasu seems to live through it all.

In 1945, at the close of the Pacific War, an invasion beset the planet Earth. Droves of Phantom Beasts - aliens from another world - landed and waged war against man. Humanity was forced to unite and fight this common threat, but years later, in present times, the death toll has depleted the military forces, leaving Japan with no choice: They must enlist the help of teenagers. Atsushi Hayami is among those who, rather than lead a normal high-school life, must take up arms to ensure the survival of mankind.